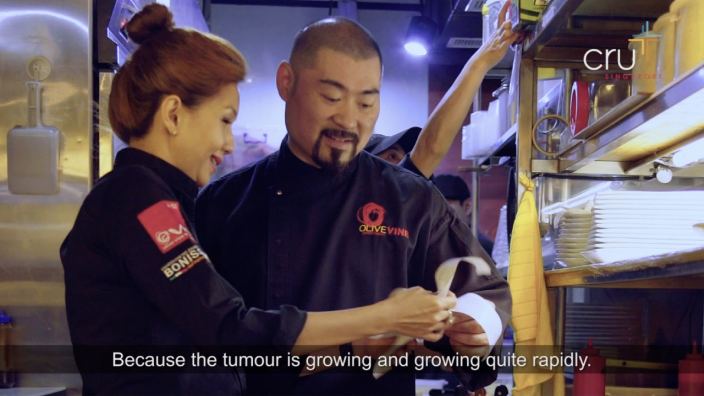 An Extraordinary Business As Mission Journey

Olive Vine co-founders Jason Ong and Judith Halim didn’t know how to cook when God called them into food and beverage (F&B) business.

All they had was a desire to feed the hungry children they’ve met from their missions work all over Asia.

“There was one time, where there was this child who was very hungry and went into the woods and started to dig up roots and ate the roots.

“And that kid subsequently had diarrhea until she died.”

“When we received the news, I felt so bad. I said to the principal, ‘We will not stop feeding, because we will prepare the food so that they will not go hungry and will not starve to death,’” Jason recounted.

Launched in 2007, Olive Vine has since fed many at-risk communities in Pakistan, Myanmar, China, Indonesia, Malaysia and the Philippines.

Jason's pursued his business-as-missions (BAM) calling despite being a supposed dying cancer patient.

Back in 2004, Jason was diagnosed with a rare and aggressive form of brain cancer. After the initial surgery, he was given six months to live.

Defying all odds, he hung on to continue running Olive Vine—and serve God in missions—together with Judith.

All these wore Jason down over time.

Judith was devastated. “It was very difficult for me, because Jason is my second husband, and deep inside my thought was, ‘What if my daughter has to lose a father for a second time?’

“I may not know how to cope with it, because what if I have to face being all alone again?”

In 2012, Jason felt that he would die within a year as the tumor kept growing.  He decided to spend his last birthday in the Philippines to be with the children he had been helping as they meant a lot to him.

Judith put aside her fears about the uncertain future to support Jason as she knew it was God’s call and purpose for him to bring joy to the children. She said,

“If I know that this is going to be the end of his life, the more I want to do my best in helping him to fulfil the call that God has in store for him.

“Rather than so much thinking about myself, or what is going to happen after he passes on and all that.”

Walking by faith and not by sight, he surrendered his fears to God and anchored himself in His Word. Jason constantly prepared Judith. He told her,

“The only place that nobody can see me is when I'm facing my chiller in the crowded restaurant. I was just holding on to the door of my chiller, and I just cried there.

“I just said, ‘God, have compassion on me. I am not ready to lose my husband.’

“My daughter is not ready to lose her father.’”

Jason heard a still small voice from God in his heart soon after, “I’ll heal you because of the tears of your wife.”  Subsequently, he went for his second surgery in 2013.

More than 80% of the tumour was removed. Though successful, the procedure left him weak and in great pain.

That night, while recovering in the hospital after the surgery, Jason and Judith had a supernatural encounter. Both felt the overwhelming presence of God.

Even though Jason could not see Jesus, he felt Him touch his right forehead, and felt a new life breathed into him.

The next day, he could get out of bed and even took a shower, much to the nurse’s horror and to the amazement of his doctor. Three days later, he was discharged from the hospital.

“Teach us O Lord to number our days”

Today, Jason faces a 95% chance of relapse. Yet, Jason is certain that God is worthy to be praised for His sovereignty and all His works.

“Even if this cancer comes back again, if I have to die, I will die praising Him.

“Nothing changes the fact that He is God.”

Read what gives Jason such unwavering hope and incredible attitude towards life.

1.)   Having seen the lives of Joel and Judith and how God has been sustaining them and heard their cries to Him, can you recall a time in your own life that God had also been faithful to you?

2.)   Even in sickness, Jason understood the sovereignty of God and has chosen to empty himself for the work of God instead of despairing.  God is still on the throne amid our troubles. How can we respond to God in times of suffering and uncertainty?

Take the next step to live out God's plan for your life!

Find the personal mission that God has given you!

We believe having a personal mission statement helps you stay grounded in what God has called you to do. Come and find out!

Make an impact where God has placed you!

Join a community of both aspiring and experienced leaders dedicated to lifelong learning and growth, and make an impact wherever you are!

My Journey Through Anxiety: Learning to Rest in God

Find the most inspirational Christian stories at Cru Singapore. We hope you will be blessed as you read and discover how they overcome their challenges!

Learning To Expect The Unexpected

Amanda took a path less travelled, and ended up on an unexpected journey.