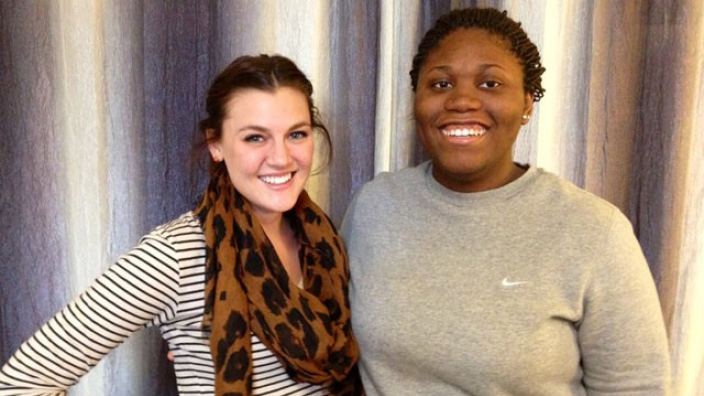 A college freshman learns about God from her friends across the hall.

On my first day of college at the University of Iowa, I met my neighbors across the hall, Carissa and Ashli.

When we were introducing ourselves, they invited me to their room. The girls had crosses on the wall and scripture everywhere. It was a bit shocking and abnormal that they were so into their faith. I wasn’t used to seeing someone my age so into God.

But my roommate hadn’t moved in yet, so they reached out to me. We had breakfast together the next day. After getting to know them, I realized they were really nice. We really bonded.

About two weeks later, Ashli invited me to Bible study in her dorm room. I was really reluctant because religion was iffy for me. I had only been to church twice in my life. I thought Christians were judgmental and stuff.

But the girls were open and welcome, not critical at all. I figured it would be a good thing, so I decided to go to the Bible study.

As our friendship grew, we had several long nights – some until 5am! – of conversations about the gospel. I also began attending the weekly Cru meeting in addition to Bible study.

Then, Cru staff member and my Bible study leader, Anne Wilson asked if we could meet and talk more about Jesus sometime.

I met Anne in the lobby of my dorm on September 6. She started explaining things to me about Jesus using the Knowing God Personally booklet. I had heard stories of how Jesus died on the cross for us, but never had anyone break it down for me on my level.

I knew it was a really big decision and my life would probably never be the same, but I wanted it. I wanted Jesus in my life. Right then and there I committed my life to Christ.

I thought I had to work all my life to be a good person: pray every day, go to church all the time and be into religion. But that doesn’t determine my fate with God. He just wants me to trust Him and have a relationship with Him.

My life has drastically changed.

Before I accepted Christ into my life things weren’t bad, but they weren’t great. I have a lot more to be thankful for now. Things happen and now I can say God did that and He is the one responsible.

There were things I was worried about and now I pray more instead of worrying so much. In Bible study we talked about it and it made sense.

Last semester I was really worried about tuition. And I know God isn’t a casino, but I prayed about it and God didn’t give it to me when I asked for it, but he gave it when I needed it. Right before the second semester started, I had just enough money to pay for the semester. It’s only by the grace of God that I’m here. That was a really big deal for me.

Even now when I’m tired or have a lot of homework, sometimes I don’t want to go to Bible study. But Ashli and Carissa remind me by saying, “It’s only an hour! It’s right across the hall.” And it’s always great. I’m always glad I go. For some reason, everything we talk about can always relate in my life.

Sammie is a freshman psychology major at the University of Iowa. She enjoys spending time with friends, playing basketball at the field house, playing pool, and attending Cru events.