Finding God on the Street

One Estonian woman tells how missionaries taught her about God. 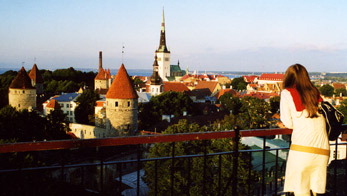 I was born and raised in a family where nobody knew anything about God. My mom and dad were born in Soviet time so they never had any opportunity to learn anything about Him.

I was 11 in 1991, when Estonia became a free country. When that happened lots of American, Finnish and Swedish missionaries came to Estonia to do street evangelism. At that time, passing out evangelistic material on the streets worked in Estonia.

I grew up in Tallinn, the capital city, and it was safe for children to go around town alone. Many days I would take the bus to the city center and run around downtown streets with my friends.

There I heard several missionaries speak about Jesus and I started collecting Four Spiritual Laws booklets in different colors. I had a pretty impressive collection.

Once there were missionaries on the town square that were passing out balloons on a stick, like McDonalds does sometimes. I didn’t know helium existed and I had never seen such a thing. I so badly wanted to have a balloon that would stand up by itself so I stuck around until they gave me one – a blue balloon with a white heart on it that said, “Jesus loves you.”

The missionaries also told me I should go to church and Sunday school. I found that I really liked the kids in the Sunday school. I saw they had something in their lives that I didn’t have. I really wanted to have what they had.

I started attending the class and I had a really good teacher. I was involved at the church for four or five months before I trusted Christ. I started getting involved and I started singing in the choir at church.

This is back in a time when Estonians were really interested in Christianity and spiritual things but the church just wasn’t ready to take in so many kids. There were 60 kids in Sunday school one week and then 80 the following week. Sunday school was a brand new idea and kids were excited.

When I was 14 I was asked to lead my own Sunday school group. I have always been pretty active by nature so I couldn’t sit still when there was a need. I lead a class for children from 8-13 years old. Estonian Christians who were underground during the Soviet time taught me.

Eventually my mom, dad and sister came to see me perform in the choir at church. They had never been against Christianity or against my belief but I think they saw it more as my hobby until they realized that I was a teenager and I was still practicing my “hobby.”

When I told my mom and my sister that I was dating Hermon, who is now my husband, their first question was, “Is he a Christian?” I didn’t know what answer they were hoping for.

I told them he was. They were relieved and they said they really wanted us to have the same belief system, the same value system. It was a very important thing for me to realize that they were supportive of what I am doing.

Kristel and her husband Hermon are now the National Directors of Agape Estonia (the name for Cru in Europe). Together they are trusting God for more Estonians to hear and respond to God’s love through person-to-person conversations and solid Biblical teaching. Just like Krystal experienced as a young girl.