A week in Tallinn, Estonia helps change the capital city. 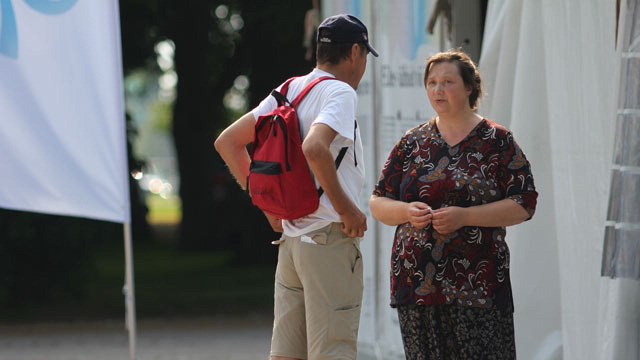 Heartbeat Tallinn had a twofold objective – first, gather Agape [Cru] Europe staff and volunteers for a week of spiritual refreshment and encouragement. Then second, and perhaps more important, to reach out to the city of Tallinn. Estonia is considered one of the most non-religious countries in the world, and after 50 years of Soviet rule, most Estonians know very little about Christianity.

The Estonian staff team invited all of Agape Europe to come to Tallinn and help them show their countrymen that Christianity is true, and that it offers satisfying answers to the challenges of life, and that people can begin a personal relationship with God.

“This week can be seen as a signal of hope,” said Reena Tolmik, vice mayor of the Tallinn Central City Council, during her welcoming address. “It can be the sign that so many in our society are looking for.”

The Heartbeat Tallinn opening ceremony foreshadowed a staff gathering like no other. A series of artistic performances illustrated the theme that God has a good plan for the world, evil wants to destroy it, and that people from Agape Europe have come representing God’s good plan.  One amazing highlight was a singer accompanied by a cellist and two violinists playing furiously – while suspended in mid-air.

“I think people were touched by the desire to care about a city,” says Lehari Kaustel, Heartbeat Tallinn director. “Not only did we share the gospel in words, but we also showed it with our presence, with a shine in our eyes, with the care and love in our hearts. And people could see this.”

“As I’ve talked to people,” notes Meego Remmel, president of the Union of Free Evangelical Baptist Churches of Estonia, “they are amazed at the quality of the program and the people. Also the whole organizational side. It’s been a privilege and blessing to have Agape people helping us carry out this mission for Christ.”

This week can be seen as a signal of hope. It can be the sign that so many in our society are looking for.—Reena Tolmik, vice mayor of the Tallinn City Council

Heartbeat Tallinn included many different components and elements, most of which fell under two main categories – Events and Projects. Events like Andre Kolé or Carlos Martinez drew large crowds and created “buzz” in the city, while Projects like helping in a soup kitchen or delivering school supplies to needy children allowed staff members to serve the people of the city. And of course, many people took the opportunity to engage in personal conversations with the people of Tallinn and talk about faith in Christ.

The public was intrigued by the Heartbeat Tallinn activities. Project participants wore their nametags or Heartbeat Tallinn lanyards around their necks, and many local people inquired as to what it was all about – giving many opportunities for informal conversations about the Lord.

By the end, some 15,000 Estonians heard the message of God’s love for them.

Heartbeat Tallinn was also a blessing to the Church in Estonia. They have long had a good relationship between denominations, going back to the days under Soviet rule when all were oppressed. But Heartbeat Tallinn allowed them to work together and show the city that Christians are united across denominational and cultural lines. “In today’s world,” says Jaan Tammsalu, Lutheran Dean of Tallinn, “when you speak about God in a quiet voice, people don’t hear. But during this one month, we speak about him in a loud voice, and they see something is happening.”

A key element of Heartbeat Tallinn was Christ Day, which drew together Christians from all over the country to pray for the nation. Somebody came from each community, carrying a flag representing that community, and pledged to both pray for the country and help launch prayer movements in their community.

“This whole week has been a message to the city that Christ changes lives,” says Meego Remmel. The real impact of Heartbeat Tallinn will be felt in the months to come, as God works in people’s hearts, drawing them to Himself. It will also be felt in the deepened faith of people like Gilles, a student from France. Gilles was on the beach during the Student Outreach day, talking to people about Christ. But nobody was interested.

Finally, he sat on a bench in discouragement and wondered if God could really use him. Then he noticed a man sitting on the bench, so he decided to try one more time. To his amazement, the man committed his life to Christ right there on the bench. Now, Gilles wants to pursue further studies in Belgium after he graduates, in order to help Agape start a student ministry there.

As a staff member with Agape Estonia (as Cru is called there), Daire (pronounced DYE-rah) directs Fox Week in partnership with the university. For 10 years, Agape Estonia has helped to organize the event as a way to make the transition easier for new students.

“I could not believe that what I was hearing…”