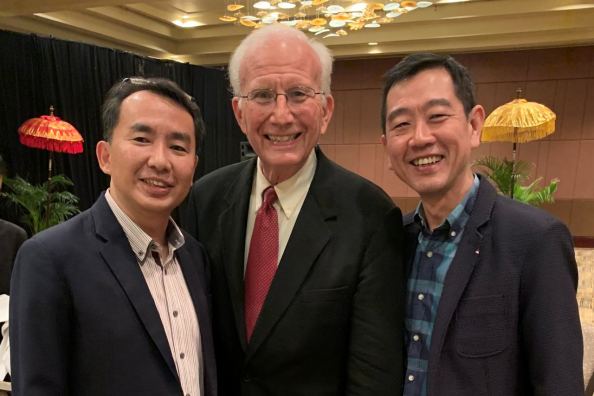 Over the last fourteen years, I have had the privilege of leading Cru Singapore. It has been a most rewarding God-given assignment, seeing first-hand the global advancement of the Gospel and hearing countless stories of life change.

My leadership journey has pushed me into many faith adventures and given me opportunities to experience God’s grace and faithfulness through the highs and lows. Through it all, I am grateful for the chance to learn and grow.

Leadership succession and renewal is key in any organisation. In 2018, after 12 years at the helm, I felt led by God to start transiting out of my role as Country Leader. I sought the counsel of Cru’s global leaders, Cru Asia Limited (CAL) Board of Directors and my leadership team. They resonated with my desire and were supportive. In 2019, Cru’s global leadership and CAL Board launched a selection process to identify and interview potential candidates.

I am pleased and delighted to advise that the board has appointed Goh Hock Chye as Cru Singapore’s Country Leader Designate. Hock Chye will assume the role on 1 October 2020. Hock Chye’s involvement in Cru started from his days at National University of Singapore and he has been a staff member of Cru Singapore since 1995. He was appointed the organisation’s Head of Operations in 2006, and has been serving as Deputy Country Leader since the start of the year. He, his wife Peh Muay and their three lovely daughters Dorothy, Tiffany and Christabel worship at Bethesda (Bedok-Tampines) Church, where he is also serving as an Elder and co-leading a cluster of eight cell groups with Peh Muay.

Hock Chye’s astute mind in problem-solving and wisdom in managing people have helped shape our operations into a best-practice model within Cru’s global movement. He was enrolled in the year-long Lake Hart Stint Programme at Cru’s Global HQ in Orlando, Florida, from 2009 to 2010, which afforded him great takeaways from exposure to the work being done there.

To facilitate a smooth and seamless handover, I have been sharing various aspects of my current roles and responsibilities with him, and coaching him in the intricacies of the role.

I will remain on staff with Cru after the handover, and am looking forward to serving and contributing in another role.

In the meantime, we covet your prayers for a God-honouring transition during this critical period.

Lord, I Need an Answer!

In 2022, Cru Singapore celebrated our 50th anniversary. We thank God for His faithfulness to Cru Singapore as we recalled His Story, His Glory.

Is It Worth It?

A reflection on the cost of our faith.

Returning To The Good Old Days

How is your new year going to be? It's often a choice between letting our zealous past be a distant memory or returning to God with a renewed devotion. What does Chapter 2 of Jeremiah have to say about this?