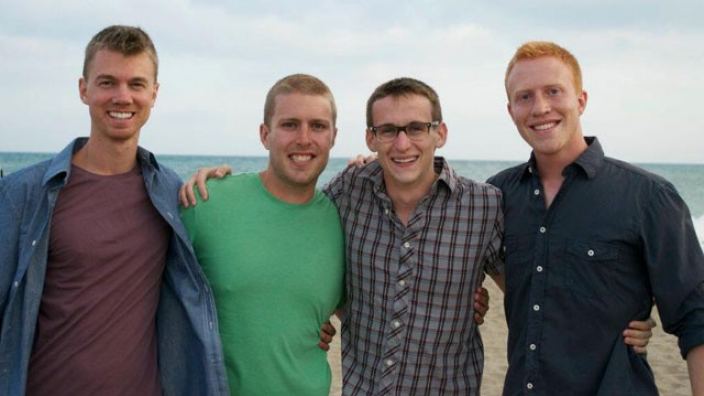 How Sam got re-introduced to God.

My grandparents and parents were one of the biggest spiritual influences in my life. I remember hearing about God from a very young age, but even though I prayed a prayer when I was young, I wouldn’t have called myself a Christian. I found my identity in everything and everywhere but Christ.

When I was about 15, I found my identity entirely in what other people thought of me. There were rules in my family that dictated what I could and couldn’t do, so I followed them. But fear was the only thing that stopped me from acting out.

I became the definition of a Pharisee. I didn’t do the bad things people in high school were doing, but internally, all I wanted was to do those bad things. Whether it was drinking, or partying, or whatever. I wanted it.

I couldn’t hang out with certain people but still wanted to be like them. I felt trapped. My heart was really far from God. I would pick up my Bible maybe once or twice a year, mostly when I felt guilty. My view of God was distorted. I thought He was angry with me. I felt like a failure.

I was convinced I was living rightly, but was doing it completely for myself.

When I got to college at the University of Wisconsin, I was out from under my parent’s roof. I could drink and it would be okay. No one was going to be there at night to question me. I started to drink and party a lot.

One afternoon, some guys from my dorm and I were eating lunch on the lawn. Someone approached our group with a spiritual interest survey and I sheepishly agreed to fill one out. I promptly forgot about it.

That night I went to a house party with guys from my dorm and made choices I silently regretted. But I was still worried about what people would think of me. I was caught up in finding satisfaction, but in the wrong places.

A couple weeks later, someone named Marc knocked on my dorm room door. He asked me about my life, my background, trying to get to know me. He was a senior. After that day he and some of his friends continued to pursue me. I didn’t understand why, because they knew all the things I was doing. But they were the first people I ever really experienced the love of God from.

When Marc invited me to a Bible study, I opted out of the next house party and went. Then later, one of Marc’s friends went through the Knowing God Personally booklet with me, explaining Jesus’ plan of salvation. I told him I’d prayed that prayer before, but never really understood what it meant. He challenged me to read the book of John and ask God to show Himself to me. I took the challenge and it was the first time in my life I actually started to know God.

Many of the things I was pursuing were sin. Over and over in the Bible, I kept reading how people were sinners in the world’s eyes like the prostitute, the tax collectors, etc., but Jesus just loved them. I realized I was a lot more like those people than I thought. I went back to read the Knowing God Personally booklet and prayed the prayer on my own, really talking to God this time. For the first time, I got it.

As I’ve come to acknowledge that I’m sinful, I’ve been able to see how much God has been loving me from the start. I still struggle with sin, but I’m able to understand more fully what it means that Jesus died for me.

God has given me a deep passion to help students here at UW fall in love with Jesus, pursue God and understand the first commandment, “Love the Lord God with all your heart, soul and mind.” My hope is that from understanding that, they will go and fulfill the Great Commission.

The vision for campus is that every student would know someone who truly follows Christ. That vision was true for me and I’m praying it will be realized by thousands of students who have yet to know Jesus.

Sam graduated with a degree in Journalism from the University of Wisconsin in 2011 and is in his second year of interning with Cru. In his free time, Sam loves to read, play cello and piano and occasionally compose music for those instruments. He enjoys being around people and considers any night a good night when he’s been with friends. Sam is praying about what God wants him to do next.