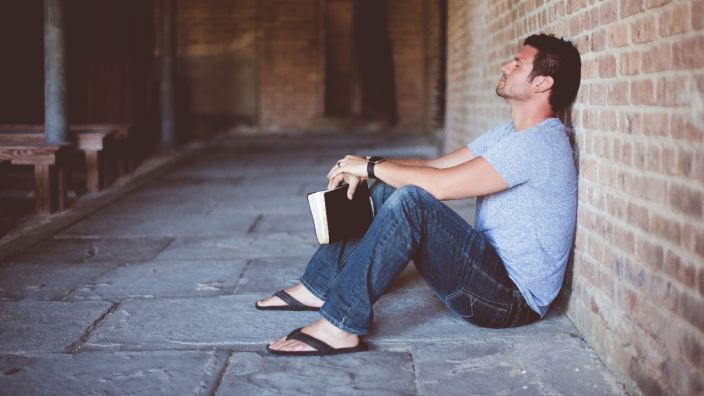 Matt DeCola’s stomach was churning. The pastor from Rochester, Minnesota, was used to leading small group Bible studies. But tonight would be different.

His sister Rachel, who had recently moved into the Rochester area, sat in the living room looking at him. What will she think? How will she respond? Is this is a good idea? The questions erupted in Matt’s mind.

Matt, age 29 and a relatively new pastor, was growing accustomed to speaking to hundreds of people. Though he’d get nervous about telling the story of his faith journey, that proved nothing compared to reaching out to his own family with the gospel.

“I can talk to a 1,000 people about the gospel and my story,” Matt says. “But to talk to my brother and sister, it’s a little different. I risk suffering when I share the gospel with my family, because there is a risk that it could affect our relationship.”

His dad left when Matt was 13, leaving him to take a fatherly role for his 3 younger siblings. Matt’s family was close, but not very religious. After attending church for several weeks in college at the invitation of his girlfriend, now wife, Shawna, he realized his need for Christ.

Though his family has witnessed his transformation, one of the most difficult challenges for Matt and Shawna has been to live out their faith in front of Matt’s family.

“Courage is huge. I’ve made the mistake of not walking through the open door,” says Matt. “I’ve also realized that they are less closed off than I thought, and that they are interested in my life and my story.”

Most of us can understand the dilemma Matt describes. We desperately want our loved ones to experience what the gospel offers. Yet, we don’t want to risk damaging a relationship that means so much and, worse yet, unwittingly lead our family members further from the gospel.

What opened pathways for Matt to talk about Jesus?

He led with vulnerability and brokenness.  One night after Matt and Shawna had been arguing, Shawna picked Rachel up from work. Shawna told her that even though she and Matt loved each other, they had been fighting.

Later, Rachel recalled that Shawna’s vulnerability was attractive to her when considering Christ. “Showing vulnerability makes the gospel more attainable,” says Matt. “People need to see that we struggle. It [brokenness] evens the playing field, because it’s not by works but by grace.” Matt discovered that when we expose our brokenness to others, it helps people see their own need for Christ and his grace.

He showed interest in what’s important to them. Matt and his brother, Jake, were talking on the phone several months ago when Jake related a significant struggle he was facing. Matt, having faced a similar challenge, was able to relate to Jake in what was a pressing issue in his life. “The gospel has ramifications all over the place,” says Randy Newman, author of the book Bringing the Gospel Home, “... about marriage, about money, about job, about children, about how you think about yourself.” Listening for what people are most concerned about provides entry points for the gospel.

He brought them into biblical community. After Jake attended church one Sunday, Matt invited him to his house along with several friends. “Jake saw the life we were living and met others who were following Jesus,” Matt says. “It wasn’t just me as a crazy Christian, but he was exposed to a group of people who cared for one another.”

Matt was a safe person. Our family members are whole people with real needs. We can express care in a multitude of ways. As we do, we can build trust and be “go to” people when life’s challenges arise. Matt calls it being part of the “circle of influence” by making it more than just sharing the gospel with words.

He prayed with and for his family members. In their phone conversation, after relating his own experience, Matt offered to pray with Jake. “That was the first time I prayed with Jake,” said Matt. “That was a big deal for him and a big deal for me. Jake responded very well. It encouraged me to be bold moving forward.”

Matt was patient. Matt often reminds people that seeing change in a person’s life takes place only in God’s timing. Randy Newman says, “That’s what preached the loudest. When [family members] saw the changes that Christ made in a person’s life.” Because we care so deeply for the people in our family, we are often tempted to push the process. Surprisingly, Randy says that “it may be more effective to slow the process down.”

Finally, he realized that God causes growth. Matt says, “I have responsibility to step out in faith – we water and plant – but it’s God who brings the growth. That’s such a good illustration when trusting God with our family.”

Since attending the Bible study in Matt’s home, Rachel has trusted in Christ as Savior and Lord, and been baptized. So has Jake.

For a more in-depth treatment of this subject, check out Randy Newman’s book Bringing the Gospel Home, as well as other resources, at FamilyLife.com.