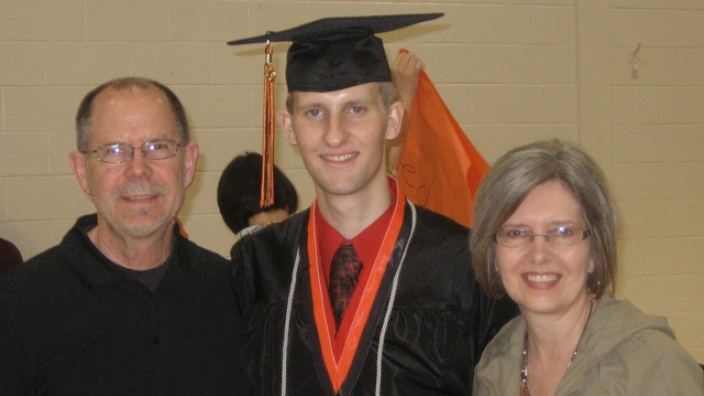 Before I accepted Christ, I was all about living a lifestyle that would help me to become really popular in high school. It was my number one focus. I was raised in a Christian home, but my only impression of God was he was just some old guy in the sky and it didn't really matter what I did in my life. I thought, he may be real and if he is, I don't really care to have Him in my life. I remember being rather miserable during this time in my life: I was willing to do just about anything to become popular.

God brought a young man named Lance into my life and we had agreed to start a young men's group. I still had not accepted Christ at this point.

God, however was using my desires to bring me to him. I had grown up in Nebraska all my life and I was a huge Husker fan: my dream was to one day play for the Huskers. So shortly after the young men's group kicked off I received word a former Husker coach, Ron Brown, was coming to Fort Calhoun High School to speak. I thought he was coming to talk about football and I wanted to get his inside information about playing football. He started off talking about football, but he used his experience to transition into speaking about God.

That night my eyes were opened to the fact that I had sinned and offended the Lord of the universe and I had to get right with him. He beckoned us to come out of the bleachers and get on our knees and bow our heads as he would lead us in prayer. I remember I didn't want to do something so humiliating, but a friend pulled me down there with him. I willingly, and in my heart, repeated the words of Ron Brown as he lead us in prayer. After the prayer I remember feeling so very different. I could tell that I had changed and I felt all of the sudden like a huge, gaping hole had just been filled in my life.

Throughout my high school career I had changed my lifestyle radically and people noticed it. I remember talking with individuals and sharing the gospel with them in the high school and inviting them to the youth group that I was in. My whole mission in life was to do the will of God and understand him and his heart.

I was put into the spotlight at my school. I was well-known throughout the school and in the town. During my senior year of schooling, I had an accident. I don't remember the event, but I can say what happened: I was on top of a moving vehicle and I was thrown off. The doctors think the truck was going somewhere in between 20-25mph due to the severity. My head hit the pavement and took most of the impact.

I was left with a severe traumatic brain injury. My brain was both swelling and bleeding inside my head. The doctors came and told my parents a couple of times before surgery that it was very touch and go and that I may not make it though the surgery. They also said that if I did come out of the surgery, I would never walk, talk, or eat again on my own.

Some of the young men at the youth group had gotten together and prayed the very night of my accident. Gary and Cherry Warrick (staff members of Cru) were very instrumental and set up a website about me to get the word out. From what Gary told me, word spread quickly and many people in the town and school rallied together and began to pray for me. Word continued to spread into surrounding communities and other surrounding towns. It sounded like I had many people praying for me and that many people were praying to God for the first time in years.

Miraculously I was out of the Intensive Care Unit within only 18 days. I was sent then to acute therapy where I was expected to stay there for a year or more. The prayers kept coming and another miracle happened. I was out in 17 days almost fully functional, just in time to walk across the stage for graduation.

I remember my mother telling me that she and my father lifted me up to God and gave him full control over what would happen. They trusted him. When they did that, it allowed God to shine in his full glory. God turned a bad situation into a good and powerful story. I give all the credit for my second chance at life to God and the prayers I had received.

Since I laid down my life for Christ, he has really met all of my needs, especially the need for attention. I really am baffled at times that the Lord and Creator of all things gives me his full attention when I pray with him. Life seems much more orderly, fulfilling, and there is a sense of security knowing that the Lord is watching over me. The knowledge of God has changed everything for me. I want people to know that knowing Christ is not a theoretical idea, but a practical and very real relationship to him.

Paul Bayer is now a student at Evangel University in Springfield, Mo.

Rescued from a Dark Place

A search for purpose leads this 22-year old economics student to find meaning in Christ.

Varsity soccer player at the University of Michigan in Ann Arbor, Mich.

Man's quest for acceptance takes him on a journey of discovery, leading him to the unconditional security and assurance found only in Jesus Christ.