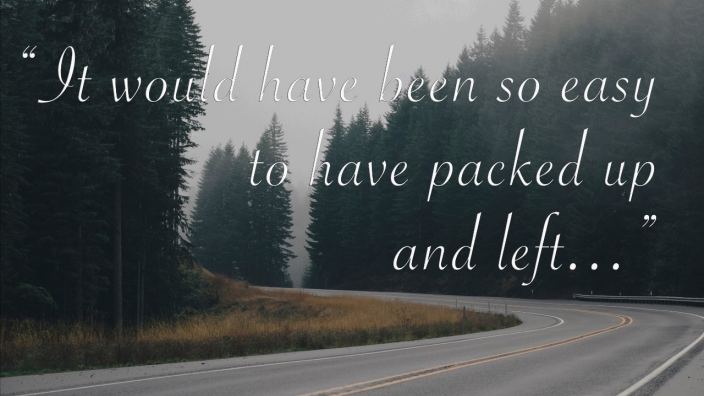 When staying is the hard choice

When I was about 14 years old, I decided I didn’t want to go to church any more. And my parents didn’t make me.

Shortly after, some girlfriends and I met some older boys at the neighborhood swimming pool. We started drinking and smoking and doing all kinds of things of that nature.

I lived at home until I was about 22 years old, when I became involved with a man who was 15 years older than me. My parents didn’t want me dating him. But instead of listening to their advice, I moved in with him. It was an abusive relationship from the beginning, both physically and emotionally.

I was working at Sears, and I would often come in late and in tears because of things my live-in boyfriend had said or done. One of my friends at Sears was Troy. He saw me really upset one time and said, “If you ever need help, I’m here to help you.”

After two years of living this way, I finally realized one night that I needed to leave.

My boyfriend and I had argued earlier in the day, and I was alone at home. A woman called for him and when I asked, “Who is this?” she hung up the phone. I thought, He’s in another relationship.

I immediately called Troy and asked if he’d help me move that very night. I also called my parents, who said that I could come back home.

Troy and I hung out as friends for several months. Then we started dating, and after about a year, Troy asked me to marry him.

Soon after our marriage, I was showing my wedding pictures to some women at Sears. We were remodeling the store at the time, and a guy named Mark Ellis was the general contractor. He stopped to look at the pictures, and the very next day he stopped by again to give me a copy of a devotional book, Moments Together for Couples. He also gave me a brochure about the Weekend to Remember® marriage conference. I remember saying a simple, “Thank you,” and putting the book on a shelf when I got home.

About three months after we were married I made a terrible discovery. I loved Troy and completely trusted him. I thought he would never do anything to hurt me. But I found a card addressed to Troy from a girl, along with some fairly recent pictures and a note saying how much fun she and Troy had had together.

I had put my complete faith in him. He had known about my horrible ex-boyfriend. I thought, How could he do that to me? When I confronted Troy, he admitted to having a relationship with the woman but said it happened when we were engaged.

I went to the pastor who married us, and he reminded me that the vows we took said “until death do us part.” Even though I was not a believer at the time, I still took those vows seriously. I also talked with my mom about the situation. She said that I needed to stay with Troy and that we needed to work it out.

So instead of running away and divorcing Troy, I continued to stay with him.

It would have been so easy to have packed up and left my husband. It was very hard to stay and deal with what had happened.

Troy and I both knew that our relationship was in trouble and we needed help.

About this time I thought of that book and brochure that Mark had given me. I told Troy that we needed to look at this book if we were going to make our marriage work. We also decided to attend the Weekend to Remember getaway. We were willing to try anything, and the marriage conference seemed like a perfect start.

Although I was excited to go the conference, I was also scared. Big groups of people made me nervous— but I am so glad that we went. I learned how to show Troy respect and realized that marriage was not all about me. I also understood that I had to work on my self-image because I had felt so badly about myself.

But most importantly, I learned that I needed a relationship with God.

I felt the Lord speaking to me when they prayed at the conference, and I prayed for the Lord to come into my heart and life.

I started using drugs and drinking at the age of 14 and stopped “cold turkey” at age 26.

Through God’s grace I was able to forgive Troy for past hurts. As he and I worked through the conference projects, we came to a new understanding of each other. Troy said that he knew he had hurt me and promised never to be unfaithful again.

There have been so many changes in my life since I accepted Christ at the conference. My marriage didn’t end in divorce, which is incredible, and I have such a different outlook on life. I went from rock bottom to feeling great about myself. Now I live my life to please the Lord.

Learn how you can have a relationship with God, too.

“I forgot about God”