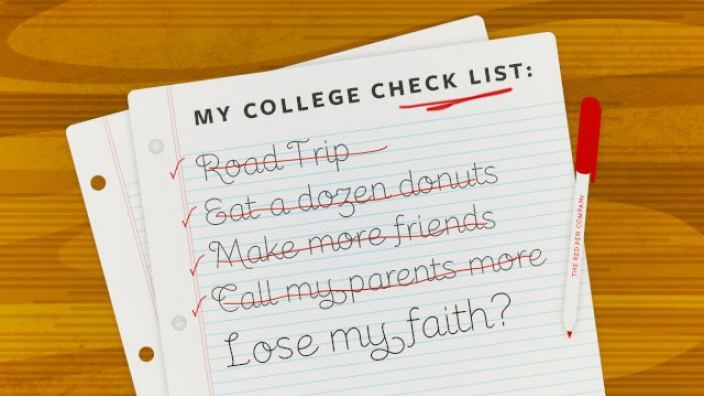 A growing trend reveals that college freshmen aren’t just preparing a goodbye speech to their families, but to their faith as well.

Conor Friedersdorf writes in The Atlantic, “[Freshmen] leave their church, the community incentives to attend it, and the watchful eye of parents who get angry or make them feel guilty when they don’t go to services or stray in their faith. Suddenly they’re surrounded by dorm mates of different faiths or no faith at all.”

However, because I attended a university in the heart of the Bible Belt, it came as no surprise to see many college students dressed in their Sunday best for church. But what did come as a shock to me was how these church attenders behaved the remaining six days of the week.

Attending church doesn’t make one a Christian, and yet, this is a lie many college students believe.

Even as someone who grew up in a Christian family, I struggled too with living out my faith instead of saving it for Sundays. Certain barriers pushed me away from experiencing the fullness of my relationship with Jesus. The majority of my first semester revolved around sorority life, school, dance and Alabama football. I didn’t get plugged in a campus ministry because I would make up excuses. I was becoming a part of the growing trend of saying goodbye to my faith.

It wasn’t until the spring of my sophomore year that I settled down and became invested with Bama Cru, Cru’s campus ministry at Alabama.

At Bama Cru, staff member Jeff Norris is “convinced that the greatest need that incoming college freshmen have is to explore and develop the spiritual area of their life.”

“One of the best ways to do this is in the context of community,” Jeff said. “Often times, freshmen are curious about faith and want to develop their spiritual life, but they don’t know where to start or who to start with.”

How not to lose your faith in college

Pursuing a relationship with Jesus and living out one’s faith seemed to be a thing of the past as I looked around at the brokenness on campus. Most students don’t come into college thinking they’ll lose their faith. But then to-do lists pile up, and it becomes a backburner. However, I found that my faith actually strengthened during college once I became more intentional about my activities.

These are a couple of things I found helpful:

1. Get Plugged Into a Ministry
Whatever your theological background, get plugged in with a group of solid believers who love God and love people. I chose to become involved with Bama Cru, Cru’s chapter at Alabama. Surrounding myself with a community of believers, I created relationships and gained a deeper understanding of the Christian faith. It wasn’t until college when I realized Christianity was not just a certain religion, but also a relationship with Jesus.

2. Take On a Leadership Role
Are you passionate about your faith? Seek after a leadership role on campus. I became my sorority’s chaplain and spread the love of Jesus Christ among my Gamma Phi Beta sisters. Some of my friends from Bama Cru led a six-week video series from Matt Chandler on dating, relationships and sex based off of the book of Song of Songs in the Bible. Open to anyone, the series was held at different sorority houses each week. In addition, my sorority collaborated with another sorority for a Bible study on Marian Jordan’s book, “Radiance.”

3. Attend a Summer Project
The summer before my senior year in college, I went on Greek Summit, a summer project led by Cru staff in Destin, Fla. There, I met over 100 college students from across the nation. The purpose of the mission trip was to learn how live out one’s faith and how to become an influence in your sorority or fraternity. It was probably the best two weeks of my college career. I learned a great deal about the Gospel and what it looks like to share one’s faith with your sorority sisters.

4. Make it a Priority
Reading the Bible and attending church is what “Culture Christianity” tells society is the right way to practice Christianity. I’ve discovered it’s a daily walk and a personal relationship. When I wake up, I do my best to make it a priority to spend time with God, not in a routine manner or because it’s my duty as a Christian, but because God is my reason for living. It’s almost like brushing your teeth. Do you brush your teeth because it’s a part of your routine, or do you do it so that your teeth won’t rot away?

With enough passion and perseverance, it is possible to live out your faith into your college experience.

Taking the Gospel to the Marketplace

See You At NTU Cru!

See You At SMU Cru!

See You At NUS Cru!