Stewardship of Our Possessions

One afternoon, Grandpa Clark strode into his house, pockets bulging with treats for his grandchildren. As he settled into his creaking rocker, the children clamored around him with expectant faces, each pushing and shoving to be the first to see what Grandpa had brought them.

The gray-haired man dug deep into his pockets and pulled out a fistful of candy, handing each child a favorite treat. When he finished, he leaned back in his rocker with a smile of contentment to watch them tear at the wrappings.

On his left, two jealous brothers argued over whose flavor of Lifesavers tasted better. Another child sat at his feet munching a candy bar. Suddenly, a tiny red-haired sweetheart patted her grandpa on the arm. Concern furrowed her brow. 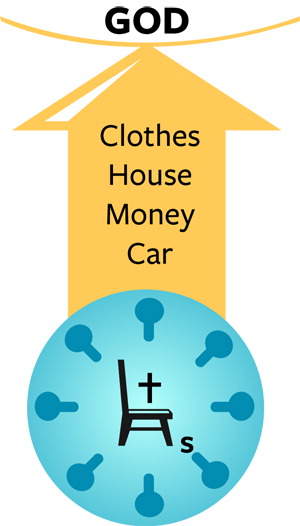 "Would you like some of my M&Ms, Grandpa?" she asked with sad, shy eyes. "You don't have anything."

Grandpa Clark peered down at his only granddaughter and grinned. Gently, he gathered her dainty form into his lap. "Why, you haven't even opened your candy," he observed.

She stared into his eyes with a frank expression. "Cause I want you to have the first one."

"Why, thank you, I think I will," he smiled, carefully opening her little package. With relish, he removed a couple of colored candies and popped them into his mouth. Then he wrapped his arms tightly around her, engulfing her happy face.

This story clearly illustrates tithing - giving back to God the first part of what He has given us.

As you recall, the word tithe comes from a Greek term simply meaning the tenth. Godly principles underlay this practice. Tithing accomplishes the following:

Tithing performs a role entirely different from that of mere giving, which suggests that we own all that we possess. Through tithing we acknowledge that God created our increase. As stewards of what God entrusted to us, we set aside a proportion to use for the cause of Christ. We never consider any part of our possessions to be our exclusive property but prayerfully tithe on the entire amount.

"The purpose of tithing," we have learned, "is to teach you always to put God first in your lives" (Deuteronomy 14:23, TLB). God does not honor a gift that comes from leftovers. He requires the first and the best of our increase (Exodus 22:29,30; Proverbs 3:9,10). Tithing ensures this.

Ten percent, an Old Testament measure for giving, is a good beginning point for a faithful and dedicated steward. And though we are not under the Law but under grace, as Dr. J. B. Gabrell declared, "It is unthinkable from the standpoint of the cross that anyone would give less under grace than the Jews gave under law."

Measuring their giving by the grace of the cross and not by the legalism of the Law, the early Christians did not limit themselves to the tithe. They gave much more. And they gave in the Spirit of Christ, as a demonstration of His pre-eminence in their lives, to help fulfill the Great Commission.