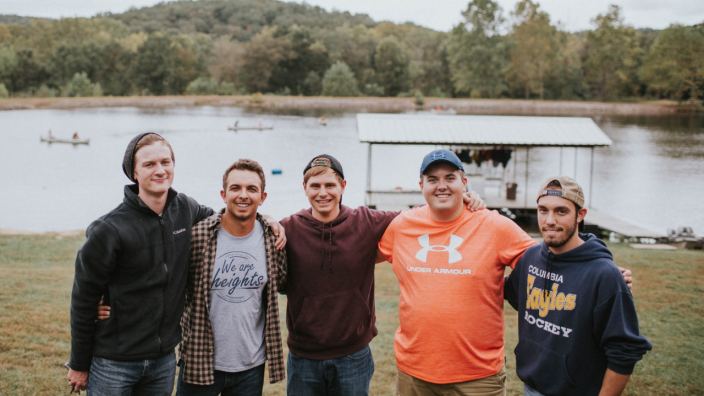 The “Slip Wall” is an obstacle of legendary proportions featured on NBC’s Spartan Ultimate Team Challenge. Angled at 45 degrees and slicked with mud and grease, the wall is nearly impossible to ascend alone. It takes a team assault, a coordinated effort of climbing stacked bodies and hoisting teammates over the top.

Navigating the challenges life throws at us can feel equally daunting without committed, long-term relationships.

Attacking the obstacles together makes overcoming them feel possible, but going it alone means near-certain defeat.

The problem with men and meaningful friendships

In 2014, Men’s Journal published an article entitled “Do Men Suck At Friendship?”

The answer, bluntly, was pretty much.

It presented the “Male Deficit Model,” based on 30 years of research, which shows that male friendships typically fall into three categories – convenience, mentoring, and activity. The study argues that men tend to drift apart whenever the shared convenience, mentoring, or activity ends. There is no underlying depth that keeps the relationship going once the function it’s centered on is gone.

Are your friendships like that? Mine used to be.

Until college, my friends were mostly guys I played games and sports with or who shared the same lunch period. Now, at 36, I can count on one finger the high school friends I’m in touch with.

Both Scripture and life experience show how important friendships are. The difficulty lies in finding meaningful friendships and holding onto them.

Since college, I’ve been fortunate to be part of a group of men who have experienced life-changing friendship as we climb life’s walls together.

College offers a rare experience of community. Life is relatively unencumbered with responsibility, and you live in close proximity with thousands of people your age. It can be a relational goldmine.

I got involved with Cru at Penn State and tapped into a rich seam of rewarding friendships. Growing in Christ and engaging in ministry together provided bonding agents for dozens of strong male friendships.

I found my team. Where can you find yours?

You could try actual teams, in sports or recreational activities or in planning a church event, as a way of bonding with those who share a similar vision or passion. Men bond most often through shared experience, whether that’s a road trip or house renovation.

2. Put A Stake In the Ground

My senior-year Bible study was with seven close friends. Our leader gave us an example that changed our lives.

He and his college friends made a lifelong commitment to each other, which they called a covenant.

The eight of us chose to do the same.

We signed a document with this stated goal:

To maintain and build upon the godly friendships that the Lord has blessed us all with, and to continue sharpening each other for life.

“Communication was the commitment,” says Rick, one of the eight. “Initially it was face to face once a year and regularly outside of that.”

We shared struggles, bared our souls, and asked for prayer through regular spill-your-guts emails. And we gathered yearly to make new memories and dig deeper into each other’s lives.

“Now we know each other not just as college classmates, but as husbands and fathers,” says my friend Brian. “As we spend life together, those relationships keep growing.”

Our commitment has evolved as life’s responsibilities have increased, but it was important to put that stake in the ground before we went our separate ways. Good intentions aren’t enough.

That simple act of making a commitment has been the most powerful ingredient in maintaining lifelong friendships, especially now that we’re spread across huge distances.

3. Take Off Your Mask

A 2013 Barna Group study concluded that meaningful relationships are the most significant reason why millennials stay connected to church.

My seven friends and I confirm this theory. As we all approach 40, none of us have drifted away from our faith, even for a time.

“These men are willing to listen and be honest and not say necessarily what I want, but what I need,” says Brian.

It’s been an anchor point that’s allowed us to be vulnerable within a group where we’re completely accepted. We’re imperfect and broken, but loved and secure.

We’ve cried over a broken engagement while sitting around a campfire, driven across state lines to be present for the funeral of a stillborn child, and shared our deepest, most painful wounds with one another.

There’s nothing special about us. We’ve just made a simple commitment and followed through on it.

10 Ways to Be a Good Neighbor

What American Christians miss by not building friendships with people who are different from them.

Our culture is obsessed with #squadgoals. We want a glamorous squad that can conquer the world. What are your actual “squad goals”? Who are the six people you truly need in your squad?