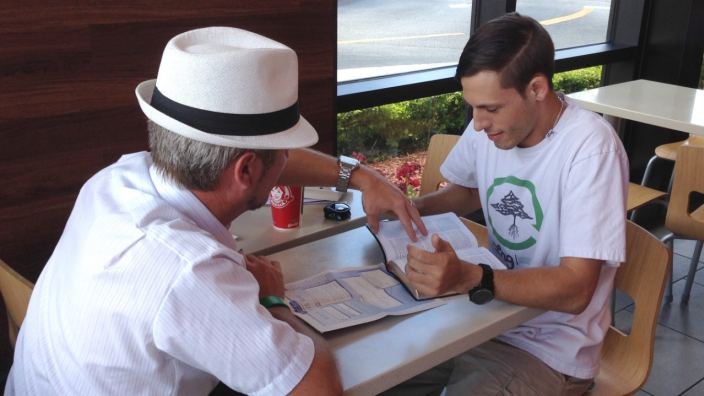 “If you’re real, God, bring my dad back,” a young Mitch Kyle prayed after seeing his parents divorce. “Or at least give me a bike.”

When neither of those things happened, he gave up on God.

But the signs from God didn’t stop. Mitch just ignored them.

He had grown up going to church and Sunday school, but he only went because his aunt and grandmother insisted he go.

“Church was a chore,” he says. “Something you had to do, and I never saw the value of it.”

His parents divorced when he was 2, and he grew up without his father, mad at the world.

Mitch had run-ins with the law, wrecked his car and was expelled from high school before being sent to boarding school.

He eventually began studying music business at Full Sail University in Winter Park, Fla., but some parts of his life were still spiraling out of control.

“I was having a really tough time one day, so I decided to go outside and talk to God,” he says. “I went and sat on the curb with my buddy, and I bowed my head to pray. I hadn’t said more than three or four words in my head before this guy puts his hand on my shoulder.

That began a journey of faith for Mitch. He invited Christ into his life a few months later over dinner with Aaron and his wife.

It’s what happened next that helped Mitch move forward in faith. He began studying the Bible with Aaron.

“It’s great to pursue something positive, something spiritual,” Mitch says. “I just finished reading the Gospel of John for the first time. Why have I never done this before?”

Each week, they meet at the local Wendy’s and study topics like forgiveness, confidence and the Holy Spirit. Mitch’s life is finally changing.

“There were so many examples of God at work in my life, but it was never internal,” Mitch says. “Now I feel relief. All my pain and struggle has come from trying to impose my will, and now it’s gone.”

“God did answer my prayer, just not on my time,” Mitch says.

Mitch needed someone to help him understand some of the basics of faith. Do you need some guidance, or are you willing to help others? If you’re not growing, it might be because you’re not helping someone else.

Check out our wide variety of materials to help others grow.