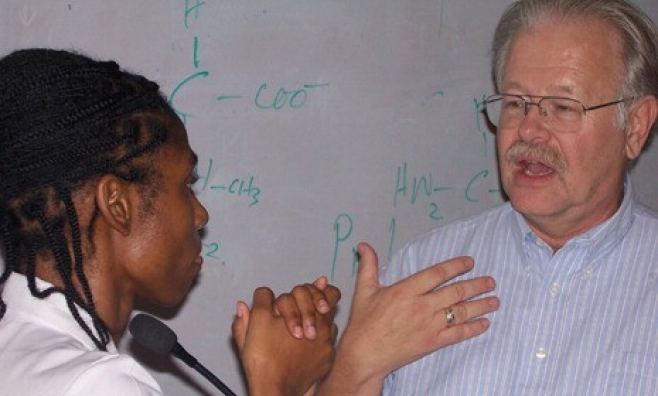 Tom Ingebritsen leverages his influence by taking Christ to the classrooms of Jamaica.

When Tom Ingebritsen became a Christian in his 40s, he tried to find ways to integrate his faith into his workplace. Unfortunately, Tom worked in one of the most difficult environments to be vocal about personal faith -- the American university.

Tom hoped to tell the people he interacted with daily or weekly about the most important decision in his life, yet as a professor, he was restricted from doing so.

He got involved with his church, and built relationships with faculty and students that sometimes led to spiritual conversations. He even began teaching an honors course about science and religion.

But he still wondered if there was more of an influence that he could have.

Then he got connected with Cru staff member Paul Gebel through a conference for Christian faculty.

Held by Cru’s ministry to professors, called Faculty Commons, the bi-annual conference helps encourage and equip professors to be a Christian influence in the increasingly secular world of the university.

Paul encouraged Tom in his influence at Iowa State University, and Paul also explained how Tom could use his status as a professor to reach students and faculty around the world.

“There’s such a strategic-ness of that platform,” says Paul. “Tom really wanted to do something for God that was more than just teaching Sunday school.”

Tom had traveled internationally before, but never for the purpose of mission work. He learned from Paul how faculty could have a dramatic influence overseas, to introduce students and faculty to Christ as well as encourage Christians.

An American professor, Tom learned, could create opportunities for ministries in other countries simply because of the credibility associated with his title. Tom’s greatest hindrance in the U.S. -- his Ph.D -- had become his greatest asset.

Soon, Paul and Tom were planning two trips, one to Venezuela and one to Jamaica. They teamed up with the local Cru in each country, speaking with students and faculty. They encouraged Christians in their faith and challenged non-believers to begin a relationship with Christ.

In Jamaica, they called one event “Chocolate Thursday” and invited students to enjoy some chocolate cake and brownies after Tom’s presentation. Organized by Campus Kairos, the student organization of Cru in Jamaica, more than 75 students attended the event at the University of the West Indies campus.

“I talked about evidences of nature that point to God,” says Tom, “and emphasized that we need to look to Scripture where we meet Jesus in person.” At the end, Tom told his story of becoming a Christian.

After two divorces, Tom had begun attending a Christian singles group at a local church. “I just realized that the way I was trying to live my life wasn’t working,” he says. “Then I met Jesus and He invited me into a personal relationship with him and a wonderful adventure with a meaning and purpose far greater than the self-centered goals I had before.”

The material resonated with the students in attendance, most of who were studying medicine, nursing or geology. Seven of them indicated decisions for Christ at the end of the presentation. One was Georgina Miller, a student from Montego Bay. “I didn't want to be empty anymore,” she says. “I wanted a fresh start.”

For Tom, that day was incredible.

“There were lots of great things that happened during the trip,” says Tom, “but the highlight for me is knowing that 7 people committed their lives to Jesus as a result of what we were doing there.”

“Tom represents what I wish every Christian professor would be like,” says Paul. “He really enjoys teaching people, not just teaching the subject matter. He sees his role as not just a job, but a mission field.”

Tom discovered that he really could integrate his faith into his profession -- it just looked a little different. He went back to Iowa with a renewed vision for how God could use him on the campus.