Reach people with the gospel wherever they are!

You can support the digital ministry as we continue to reach out and spread hope and good news.

Cru is the name of Campus Crusade for Christ International in the U.S. Here is an overview of our international ministry.

Movements everywhere so that everyone knows someone who truly follows Jesus

Helping students come to know Jesus, grow in their faith and go to their families, communities and the world to share God’s love.

Cities across the U.S. 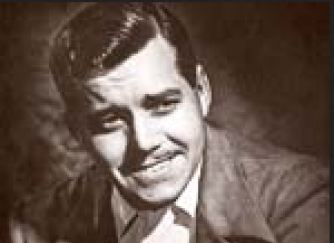 As a student at Fuller Theological Seminary, studying late one night for a Greek exam, Bill Bright receives a unique impression from God to invest his life in helping reach the entire world, starting with college students. A professor friend suggests “Campus Crusade for Christ” as the name of the new ministry. In the fall, Bill and his wife, Vonette, start Campus Crusade (now known as Cru in the U.S.) at UCLA with the backing of a 24-hour prayer chain.

More than 250 UCLA students receive Christ, including the student-body president, campus-newspaper editor and many athletes, including Rafer Johnson, later an Olympic gold-medalist in the decathlon. Cru spreads to other schools, and to meet the need, the Brights accept their first six staff members.

Bill Bright writes “God's Plan for Your Life.” This 20-minute evangelistic presentation, required memorization for staff members, sets the tone for the development of Cru's revolutionary training in evangelism and discipleship. 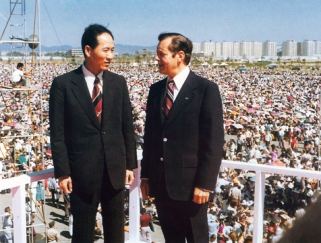 Cru becomes international as Dr. Joon Gon Kim launches the work in South Korea. Over the next 40 years, South Korea moves from a missionary-receiving nation to one that sends them, with 271 Korean Campus Crusade for Christ staff members and disciples serving in 23 other countries around the world today.

The first Lay Institute for Evangelism takes the evangelism and discipleship training from the campus ministry and adapts it to a church context.

At the eleventh hour, God provides every last penny for the purchase of Arrowhead Springs. The resort complex in San Bernardino, CA, becomes Cru's headquarters for the next three decades. 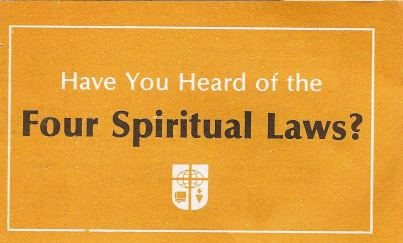 Bill Bright takes what he describes as “the distilled essence of the gospel” and writes a booklet called Have You Heard of the Four Spiritual Laws? Today the booklet has been translated into more than 200 languages, and more than 2.5 billion copies have been distributed worldwide.

With contemporary music lyrics gaining significance in youth culture through performers like The Beatles and Bob Dylan, Cru develops its own life-changing music group. The New Folk helps lead many to a personal relationship with Christ through carefully designed concerts incorporating secular music. 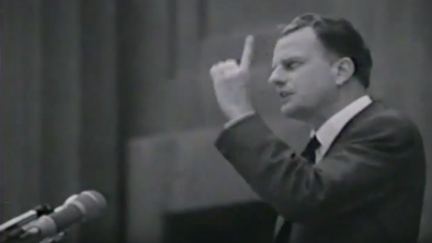 Cru staff members and 600 students converge on the University of California at Berkeley for one week of confronting the hotbed of radical campus activism with the radical message of the gospel. More than 700 students and faculty members receive Christ. The “Berkeley Blitz” ends with Billy Graham preaching at the campus Greek Theatre.

Cru staff members and others converge at the Cotton Bowl in Dallas for EXPLO ‘72. This landmark conference features evangelism and discipleship training, contemporary music concerts, and lots of rain. Read more about what happened at this historic event.

More than 300,000 delegates attend EXPLO ‘74 in Seoul, South Korea. Police officially estimate a crowd of 1.5 million at one of the evening meetings; 323,000 of them indicate decisions to receive Christ. 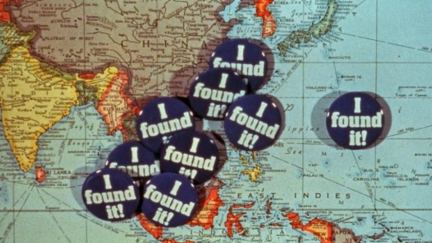 From 1976 to 1980, approximately 85 percent of Americans receive some exposure to the “I Found It!” campaign, which mobilizes more than 300,000 Christians from 15,000 churches in 246 cities for organized evangelism.

Athletes in Action, Cru's sports ministry, makes national news when its men's basketball team crushes collegiate powers Nevada-Las Vegas and San Francisco. UNLV coach Jerry Tarkanian, referring to AIA's evangelistic presentations at halftime, quips, “They beat you up in the first half, pray for you at halftime, then beat you up in the second half.” 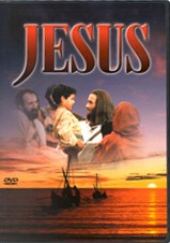 JESUS, a film account of the life of Christ, premieres in 250 theaters. Based on the Gospel of Luke, JESUS is filmed at 202 locations in Israel, incorporating a cast of more than 5,000. The film becomes the most-translated motion picture in history-more than 974 languages, 5.5 billion viewers and 201.6 million decisions for Christ as of January 2007.

Cru sends its first team of students to the Soviet Union. Under the code name “Northstar,” this summer mission project highlights an influx of covert ministry activity in Eastern Europe, which accelerates openly after the fall of the Iron Curtain.

EXPLO 85, a worldwide video conference, links an estimated 300,000 delegates at 98 conference sites on five continents, with the help of 18 satellites. Bill Bright defies jet lag while spending one day on all five continents. 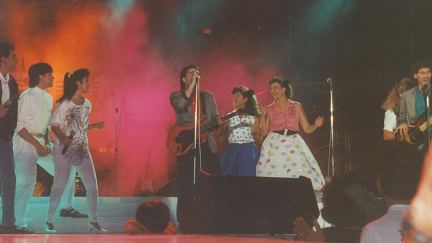 Cru launches New Life 2000®. This initiative brings Cru ministries under one umbrella in cooperation with Christians worldwide, with a goal of helping lead at least 1 billion people to Christ. 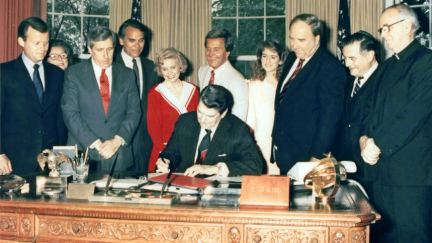 Vonette introduces the legislation that President Ronald Reagan signs to officially declare the first Thursday in May the National Day of Prayer. Vonette Bright serves as co-chairwoman in its first year. Cru later turns over leadership of the event to Shirley Dobson and Focus on the Family.

Representatives from 102 countries converge on Manila over a six-month period. During the New Life 2000: Manila project, more than 5,000 people (only 11 percent of them Americans) present the gospel to 3.3 million Filipinos, with 447,000 indicating decisions to receive Christ. 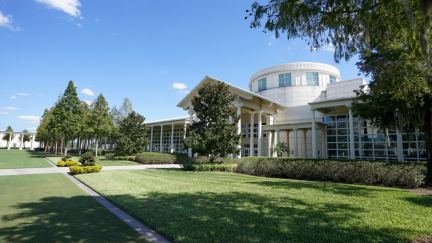 Cru's world headquarters moves from California to Florida. After 30 years at Arrowhead Springs in San Bernardino, the ministry relocates to Orlando.

The CoMission unites more than 60 Christian organizations, including Cru, in the pursuit of making the most of the new-found spiritual openness in the former Soviet Union. The CoMission foreshadows the explosion of cooperative efforts in the church at large, such as The Macedonian Project and Mission America. 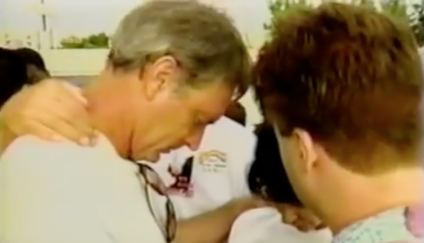 Bill Bright fasts for 40 days, and issues a call for prayer and fasting for revival in America. More than 600 Christian leaders meet in Orlando, FL, for the first Prayer and Fasting Conference. In 1998, thousands join the conference through 4,100 satellite downlinks. 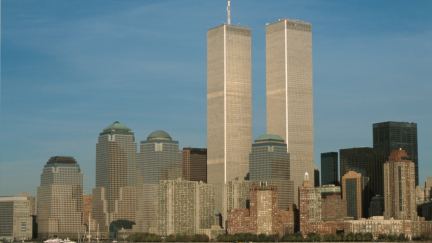 In response to the September 11 attacks on America, Cru produces the evangelistic magazine Fallen but Not Forgotten. The 16-page remembrance piece was distributed to more than 10 million people by hundreds of churches and Christian organizations.

Operation Sunrise Africa mobilizes Christians in 22 African countries. Believers from India, the Philippines, Singapore, France and the United States join thousands of Africans in the strategy to proclaim the gospel in 50 cities in 50 days. Sixty-four million people heard the gospel, 1.7 million indicated decisions to receive Christ and 81 new churches were planted.

Many of Josh McDowell's books have been translated into 65 languages. It takes just 30 languages to reach three-quarters of the world's population. 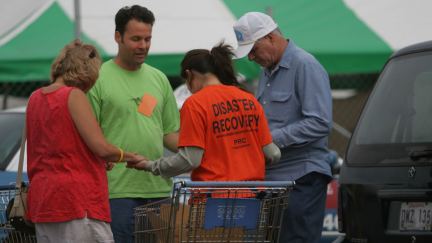 The evangelistic website, EveryStudent.com is translated into 27 languages and has more than 5 million visitors, with 400 indicating decisions to know Christ per day.

Jesus Film Project releases Magdalena: Released From Shame, the story of Jesus told from the perspective of Mary Magdalene. It has now been shown in 34 countries, including 8 on national television.

Campus Crusade for Christ becomes Cru in the U.S.

Nearly 1,500 Cru staff members and volunteers from more than 30 countries participated in the Heartbeat Tallinn event in Estonia’s capital city. By the end, some 15,000 Estonians heard the message of God’s love for them.

Year Established
1951, by Bill and Vonette Bright on the UCLA campus as “Campus Crusade for Christ”