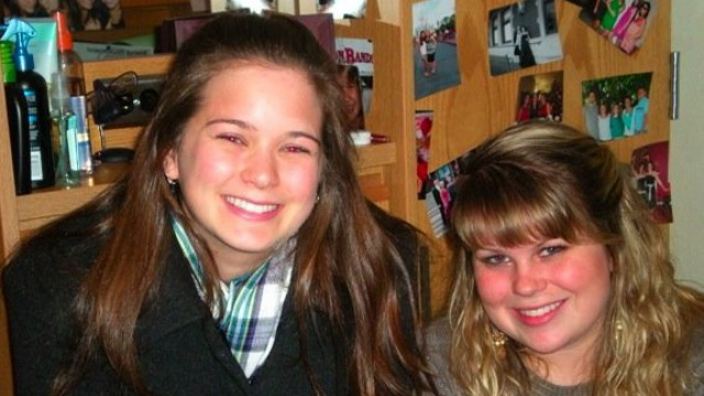 After a symposium about faith, Molly Kinsey decided to live her life for God.

Molly Kinsey grew up believing she was in control of her life. “I made good decisions, had friends and worked hard,” she says. “Up until college, I never had anything to do with religion or God.”

When she arrived at Purdue University, Molly kept encountering Christians. “I never learned about Christianity or Jesus,” she says. “I didn’t know anything.”

She was impressed with the Christians on campus. After going to a fall retreat with Cru, Molly began attending church. She also started dating a Christian guy who invited her to Purdue’s Symposium, an annual event spearheaded by the Faculty Commons ministry, along with other campus ministries and churches. The Symposium addresses tough issues that keep many spiritual seekers from knowing Christ.

“Hearing professors talking about what they believed was interesting to me because I’m an engineering major,” says Molly. Science and math have played a large role in her life. “To see other intellectuals who decided to follow Christ had a big impact on me,” she says.

At the end of the meeting, Molly filled out an information card, desiring to meet with someone to talk further about what she’d heard. A few weeks later, Erin Rutan, a Cru staff member at Purdue, met with Molly to talk more about God and answer questions.

During their meeting, Erin went through the Knowing God Personally booklet with Molly, explaining the gospel in a simple format. “Honestly, the first time I read it, I didn’t get it,” Molly recalls. “Scripture didn’t make sense to me.”

It was only through going to church and continuing to learn more about God that she ended up realizing things really weren’t in her control. Molly thought to herself, These Christians that I’m meeting… God is the most important thing to them.

And, finally, one day it all made sense.

Walking back from class, Molly was thinking about her recent breakup and how her boyfriend had told her that God was the most important thing to him. “I didn’t think anything was more important to him than me, but obviously God was,” Molly says, “and that made a big impression on me.”

She was thinking about God like Santa Claus. “Like, how Santa Claus couldn’t possibly make it to everyone’s house in one night, I figured God couldn’t actually hear everyone’s prayers and know our thoughts,” Molly says. “But I was limiting God to human boundaries.”

“I had a feeling and prayed, God I believe you are real and I want to live my life for You. I don’t really know how, but I want to. And then I just felt joy like nothing could ever go wrong again,” she says. “I immediately went home and started journaling. I wanted to remember that feeling, I wanted to write it down. Everything I had been freaking out about that week with that boyfriend and stuff wasn’t about me, it was about God.”

Later, Molly met with Erin again, once more reading through the Knowing God Personally booklet. The end of the booklet explains how to pray, inviting Jesus to be your personal Savior, surrendering your life to Christ. When Erin read that section, Molly explained, “I think I’ve already done that.” Erin was shocked and excited to hear the news.

Molly began meeting regularly with another Cru staff member, Liz Davison, for discipleship and continued meeting with her for 2 years. Molly stayed involved with Cru all of her years at Purdue, joining the Cru student leadership in her upperclassmen years.

“God definitely used that speaker at the symposium… to guide me toward Him,” she says. “It wasn’t me.”

Molly graduated in the spring of 2012 with a Biological Engineer degree and is involved in her local church where her husband leads worship and she helps lead the children’s ministry.

Thinking back over how things happened, Molly knows it was all God.