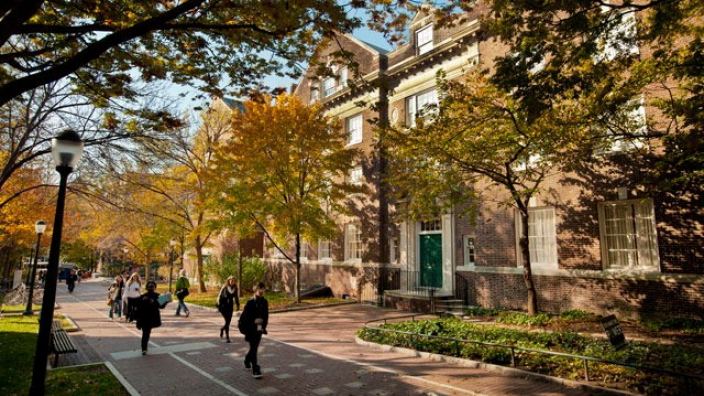 Behind office door 142, Natalie Miller sits in front of Michael Atchison’s massive desk, crying. It’s her seventh year in the highly stressful, combined-degree veterinary program at the University of Pennsylvania. She’s just broken up with her boyfriend, the final straw in an incredibly stressful year. Mike’s face is kind, eyes unflinching behind spectacles as he listens and encourages her. Yet, Natalie’s situation isn’t unique. Somewhere along the eight-year program, one of Mike’s 25 to 30 high-caliber students breaks down. Many end up in his office shedding tears during a check-in.

“Sometimes I feel like I should hang a sign that charges for psychiatric services,” jokes Mike. Humor is one of his endearing qualities, used not only in conversation, but also during lectures and in church meetings. But people want to be around him for more than his humor. “He cares about me as a person,” Natalie says. No matter what the topic, at the end of a conversation with any student, Mike always asks, “How can I be praying for you?”

Mike occupies an unusual role as not only a biochemistry professor and supervisor, but also as a friend and confidant. He uses difficult situations as occasions to introduce Christ. If a student is having a meltdown, Mike asks if he can explain how he deals with problems. If they agree, he tells the story of how God worked in his own life. “Sometimes they want to hear it; sometimes they don’t,” he reflects.

While Mike’s main concern is for students, he’s also been an influence on the faculty and staff at the university by volunteering for 20 years with Faculty Commons, a global faculty network committed to reaching students and peers with the message of Christ. (Faculty Commons is a ministry of Cru.) The local network of Christian professors and staff workers at Penn began forming in 1990 under the leadership of Dave DeHuff, a Faculty Commons staff member and friend of Mike’s.

“One of the things I appreciate about Mike is how he takes risks as a Christian,” says Dave. “While he was up for tenure at Penn, he would stick his neck out when being a Christian wasn’t popular.” When Faculty Commons sends out invitations, Mike often volunteers to have his name and address on the RSVP—everyone knows of his faith, and he doesn’t let that hinder him from representing Christ, even amid the delicate time of tenure selection.

If students inquire personally about religion, God or the Bible, professors can open a discussion on faith, but many evangelical professors fly their Christian flags fairly low in order to retain their jobs. Before 1996, campus attitudes were somewhat hostile toward Christianity at Penn, the first nonsectarian Ivy League school established in the United States. Since the late ’90s, the campus has been more accepting of Christian organizations. “The university is a unique place for the gospel, especially here at Penn,” Mike says. “[But] it’s not a core value. Not a top priority.”

Amid severe academic pressure and secular worldviews, Mike is playing a role in the Great Commission. “[Students] come to me,” he says. “They are here.”

“I share bits of the gospel with everyone who works in my lab,” he says. “Life is more than molecules bumping into each other.”

On a Tuesday at lunchtime, Mike grabs his shiny, square briefcase and quickly pops it open, gathering a few notes, and a sandwich and fruit in a plastic bag that his wife packed that morning. He scans the notes before walking to the Christian Veterinary Fellowship lunch meeting. Mike is the faculty sponsor of the weekly group. Today there are six students, all eating brown-bag lunches and chatting before the meeting begins.

Introducing the topic of envy, Mike explains, “Sins are attractive because there’s something you get out of them. Envy is the one sin you gain nothing from, and it is very evident in the academic field.” He explains how envy will make anyone miserable. Mike lays out a plan to avoid envy, including the advice to take your eyes off yourself and identify with another person in a sympathetic way. Students listen carefully and appreciate this time Mike spends with them, especially during a busy academic week.

“I didn’t have much time while I was a full-time student,” says Kristina Zaprazna, now a post-doctoral research assistant in Mike’s lab. “Having a morning Bible study in [Mike’s] office was very important,” she says. “He is more personal than other professors. He is more of a mentor, a parent figure.”

“Mike has always been motivated to help students,” says Dave. “He has hosted Bible studies with students from India, China and the Czech Republic in his office.” One Pakistani student, Aisha, gave her life to Christ after attending Mike’s Bible study for many months. She always asked good questions, and then one day told Mike she made the decision to make Christ part of her life.
“Mike is a prayer warrior,” says Dave. “I can always count on him when I need prayer—I can confide in him and he is trustworthy.”

His wife, Lakshmi, is also a professor, and she teaches biology at Chestnut Hill College. They have two grown sons, and often collaborate and publish together.

Mike’s priority is his family, but he still finds time to be involved in the lives of many on campus. Kurt Hankenson, assistant professor of cell biology and doctor of veterinary medicine, has worked with Mike at Penn’s School of Veterinary Medicine. “Mike has been very invested in my life,” he says. “Not many people like to talk about personal struggles, but when I feel frustrated, Mike is one of the first people I go to.”

Passing hundreds of students each day, Mike rubs shoulders with America’s future leaders. Whether through tears or teaching, he will continue pointing them to Christ.