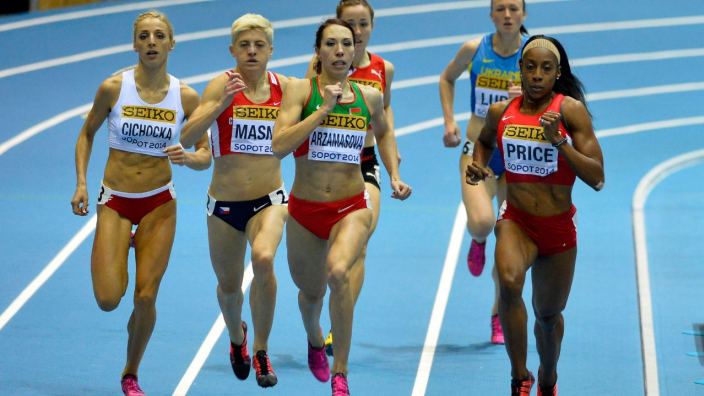 Chanelle Price (far right) wins the women’s 800m in 2:00.09 in the IAAF World Indoor Championships in Athletics at Ergo Arena on March 9, 2014. Photo by Image of Sport.

It takes a little over 2 minutes for a D1 women’s track runner to complete an 800-meter race.

It may not seem like a long amount of time, but for Chanelle Price, the 2014 IAAF World Indoor 800-meter champion, 2 minutes was all she needed.

It took Price only 2:02 minutes to also become the first American woman to win the women’s 800-meter race at the 2014 Indoor Championship. Yet for Price, 2 minutes was more than just a gauge of time. It was all of her self-worth and significance. She didn’t realize this until one day when she “heard” God tell her a better way to go.

“I wasn’t really raised in a Christian home. We believed in God, but that was about the extent of my relationship with Him. We didn’t go to church, or dive into the Bible or pray or anything,” says Price.

At the age of 16, Price was already competing in the USA Outdoor Track and Field Championship. After high school, she ran track at the University of Tennessee.

“Right before coming to college, I started to go to church with a friend,” says Price. “I was really excelling in track in high school – running unheard-of times for girls my age and kind of dominating and winning 6 national titles. I started understanding that I was blessed and I was gifted. So to me, going to church was a way to say ‘thank you’ to God, and in my eyes that was enough at the time.”

However, one particular church service felt different from the rest. It was then that Price eventually gave in to the anxious nudge in her heart and made the decision to dedicate her life to God.

“I didn’t really know what I was doing, but it felt right at the time,” says Price.

Coming off a dominating high school performance, Price felt driven by the expectations of others to continue performing at that same level in college.

“It was just rough; I got injured a lot,” says Price. “I lost confidence. I wasn’t really dominating like I wanted to. It wasn’t a bad career by far, but it just wasn’t what I expected. And that was rough for me. It was really rough to handle because honestly, track was like my god. My self-worth basically depended on how I performed at practice and at meets. Track was definitely my idol. When I wasn’t performing up to my expectations, I was really hard on myself and would get really down.”

After the 2013 USA Championships, Price sat in her hotel room and sobbed. With the lights off and in total darkness, her eyes were again opened to the reality of what track had become in her life.

“My whole self-worth was based on everything I did in track,” says Price. “I was completely depressed, and at that moment I really had no one to turn to. I remember hearing God [in my mind] say, ‘You have to stop; you can’t do this anymore. It’s not healthy. You need to put everything aside and start chasing after Me.’”

And just like that, Price knew that building a relationship with Christ was more important than the 2 minutes it took her to run 800 meters.

“She was just at rock bottom, thinking, ‘What do I do?’” says Tarasewicz of Price. “She was definitely questioning God and just questioning a lot of other things, but it was more because she wasn’t competing as well as she had before she went to college. She was questioning if she should even continue running because she wasn’t where she used to be."

After having the opportunity to meet with Tarasewicz, Price began to focus on working toward a deeper relationship with Christ.

Sarah Burd, another staff member with Athletes in Action, met Price at a Bible study and recognized Price’s willingness to grow in her relationship with the Lord.

“She starting coming to [Bible study] and she wanted to grow, but didn’t know she [was going] to grow that much,” says Burd.

Burd says that Price believed in Christ and was thankful for the gifts that He gave her, but she lacked the foundational knowledge of God and the Bible.

“We’ve really been taking that zeal that she had and working on building a foundation underneath it, and it’s been so cool,” says Burd.

With various spiritual mentors at her side and with a new attitude, Price found a whole new vibrancy in her relationship with Christ.

“Honestly, God is my motivation on the track,” says Price. “I don’t really care about the expectations like I used to. He’s the only person I’m running for. My self-worth is no longer defined by how I perform on the track: it’s defined by what He says is true about me. So I go into the races and the practices with such a clear mind. It’s fun again, and I feel His presence when I run. He’s blessing me tremendously because of my walk with Him and because I’m chasing after Him.”

When you think about it, two minutes isn’t very long at all. It can take any athlete two minutes to decide that her sport is either what she does, or who she is.

Now, Price can not only run an 800-meter race in two minutes, but she can also run the same race and give God all the glory. Her self-worth is found in Him, not in the few minutes it takes to become a world champion.

A Bible verse that expresses Price’s new outlook is Acts 20:24,

“However, I consider my life worth nothing to me; my only aim is to finish the race and complete the task the Lord Jesus has given me – the task of testifying to the good news of God’s grace.”

Do you struggle with your self-worth like Chanelle? Learn about having a relationship with God and being filled with the Holy Spirit.

UTC VIRTUAL is a unique online experience hosted by Athletes in Action Singapore for every athlete in every team, every sport, and every nation! Find out more here

Every Team, Every Sport, Every Nation

From underdog to thriving ministry, Athletes in Action Singapore sees God's hand at every step

Cameroon World Cup player: “We were sent with a divine destiny.”

Eyong Enoh talks about learning the Lord’s plan for his life.