New Christians are learning to walk daily with Jesus. 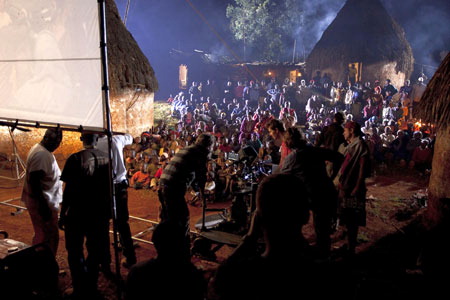 When a new translation of the JESUS film premieres in Africa, Christian leaders often celebrate the event by holding the film reels above their heads and asking God to use this film for His glory.

For Christians, placing our faith in Christ is just the beginning of our faith journey. Our goal is to walk with Jesus moment by moment on a daily basis.

“Without proper follow-up, people go back to their idols,” says George Buremoh, Jesus Film Project’s Coverage Coordinator for West Africa. “They need to know that it is Jesus—period, not Jesus –plus.”

Yet, one of the spiritual needs of Africans is to grow in the depth and understanding of their faith.

With that in mind, Cru in Africa and Jesus Film Project partnered together to develop “Walking With JESUS Africa,” a video-based discipleship series to show to African Christians to help build them up in their faith.

The first 5 videos were filmed in a farming village in Kiambu, Kenya. The remaining 7 videos will be filmed in a city in West Africa so that the lessons will appeal to both rural and urban Africans. Each real-life episode teaches a biblical principle. The episodes—currently only available in English—include lessons on Assurance of Salvation, Fellowship of Believers, The Holy Spirit, Walking in The Spirit and Growing in Christ.

In October, a team of 9 YWAM trainees from Australia traveled to Lesotho, a separate country in the middle of South Africa, to show the discipleship series to teenagers in the city of Mohale’s Hoek. During the week, about 60 teenagers viewed “Walking With Jesus” at two different locations. YWAM staff member, Anelle Jacobson reported that after viewing the lesson about The Holy Spirit, one boy said he wanted to pray that the Holy Spirit would help him to live a godly life.

When Anelle asked the group the next day how God had been speaking to them, the boy said he had wanted to do some “bad things,” but resisted because of The Holy Spirit prompting him not to do them. The young man has realized that believing in Jesus with your whole heart means that every day you live to serve and love people, showing them Jesus’ love and telling others about Him.

It’s a start, but the dreams and prayers of staff members with Jesus Film Project are starting to be answered regarding the follow-up series.

“My dream is that, in the future, every JESUS DVD would also include visual story follow-up materials that would help people be assured of their faith, learn to walk with Jesus, and continue in their faith to become lifetime laborers, “ says Jim Green, former Executive Director of The JESUS Film Project.

“Our prayer is that “Walking With JESUS Africa” becomes a tool that God uses throughout sub-Saharan Africa to significantly build His church in numbers and depth,” says JFP New Media staff member Bruce McClenahan.