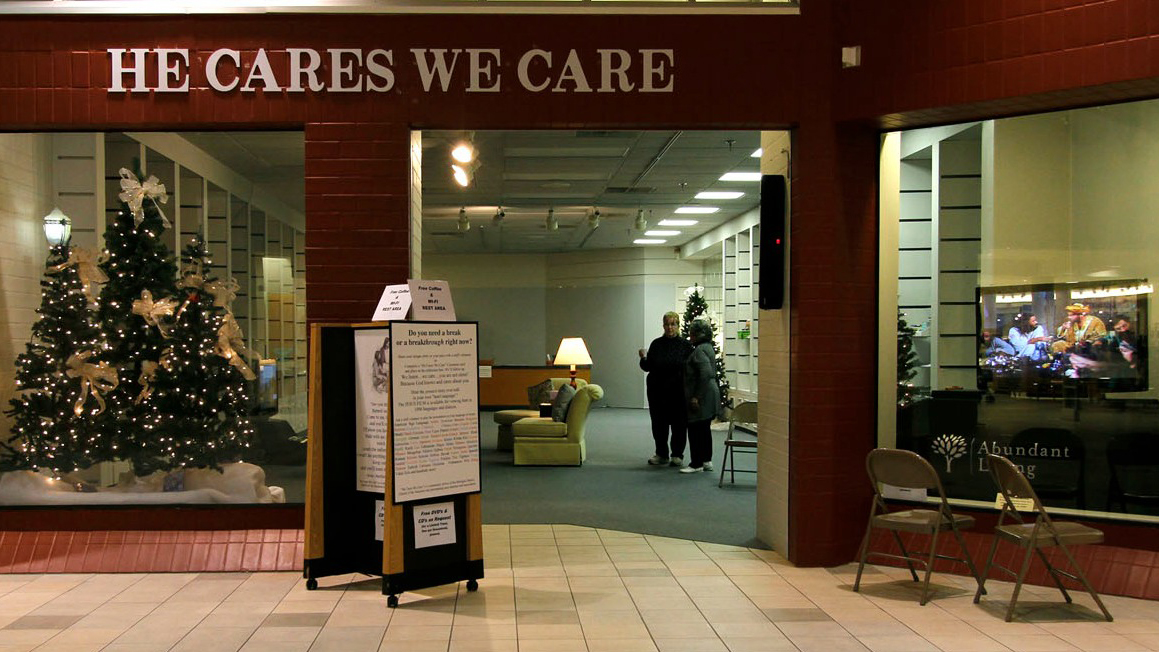 A pounding headache pushed Hilary Millet-Clark away from the bustle of the Meridian Mall where she worked at a kiosk.

The “He Cares We Care” center in the Okemos, Michigan mall seemed like a place she could find quiet, and she decided that if she could just sit on one of the couches inside the living room and have one of the free bottles of water, she could handle getting a lecture from Christians.

But instead of finding judgment, Hilary found people who showed her Jesus. The JESUS Film played on a screen nearby while they talked with her and listened. In the midst of a struggle with severe depression, Hilary began a journey toward knowing God personally.

Through the He Cares We Care Center, 35 others came to know Christ as their Savior. The storefront was open 14 months, showing the Jesus Film on a continuous loop. By reaching people where they live and work, the ministry built up disciples of Christ, brought healing and planted churches. Its influence remains visible today, 4 years after it closed.

“So many people like me went in just to vent and ended up coming back again and again and seeing the video and picking up a Bible,” she said. “It all picks up from there.”

Mark Montgomery, a pastor in Lansing, came up with the idea of the He Cares We Care Center as a spiritual resource for shoppers and employees. The center was largely run by people involved with the Lansing BreakThrough Church of the Nazarene, an association of neighborhood and marketplace churches. Other area Nazarene Churches provided financial support and volunteers.

Today Hilary is church secretary. And she reaches out to people struggling with depression. Her life has been transformed.

“Before that I was floating. I had no direction,” she says. “Now I not only have a direction, but I have a purpose.”

Several of the people Hilary met at the He Cares We Care Center have joined together in community at churches and Bible Studies.

Two church gatherings developed, one in a café and another in a home above a photography studio.

Lisa Rabideau volunteered at the center and attends the gathering in a photography studio. She says although the people involved come and go, the community remains.

The He Cares We Care Center stands as a model for how ministry in the marketplace can make a difference as it did for Hilary.

“I think it’s very important wherever God leads us to listen to the people that are there, be of service, do the mission work of research, and listen to the Holy Spirit and to what Christ has in mind for that location,” Mark says, “and then just follow Him.”