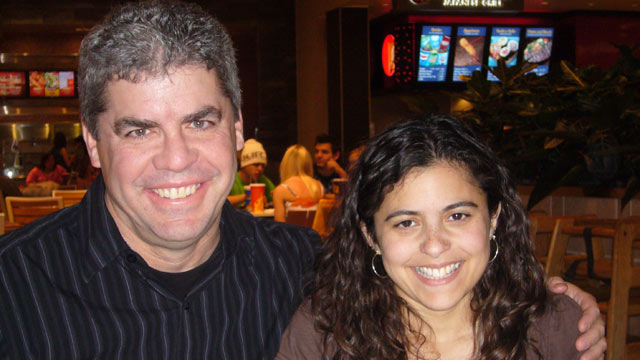 In 2009, Gary’s wife, Debbie, handed him the phone saying a woman wanted to speak with him. It was an ex-girlfriend he hadn’t heard from in 28 years. She wanted to know if her daughter – Gary’s daughter, whom he had never met – could contact him.

A college student in 1980, Gary had just become a Christian when he learned his girlfriend was pregnant. He wanted to do the right thing and met with his girlfriend and her parents. Since Gary and his girlfriend were in no place to marry, they decided it would be best if he signed over his paternal rights.

Later as Gary dated and got married to Debbie, he didn’t hide his past. But nevertheless, his experience of fathering a child in college became a dark room in his heart that he rarely visited for the next 28 years.

His college experience had been an immensely stressful time. He had mostly negative emotions in that room: fathering a child, signing it away and then walking away.

Now his past came calling and that door was opened.

Gary knew that his child wanted to contact him. How was he going to explain this to his 3 other children? How would his wife react? And what about ministry with Cru in Denver?

In that moment and the moments following, Gary experienced the most emotional period of his life: waves of regret, fear, guilt, shame, joy, excitement, hope, love. It was a big mix to handle. But the overriding emotion he had was a desire to know and love this child, his child. He had another daughter. Her name was Solana.

After the phone call he talked with his wife and they both decided almost immediately that their answer was yes, they definitely wanted Solana to contact him.

Gary had a great desire to be in relationship with his daughter, but he had no idea what she wanted or needed from him. His very personal experience of fatherly love informed his understanding of how God, his Heavenly Father, must love him. He held tightly to this.

Gary soon told his two adult sons and teen-aged daughter about Solana. The boys took it better than his daughter. She felt surprised and betrayed, something she and Gary would work through with time.

Soon Gary and Solana met in a mall in Sacramento near Solana’s home. Gary got to hug, see and listen to his very own daughter. She shared pictures with him and stories from her life. Gary found out that she had had 4 stepfathers – of which the last one, the “nice one,” had died. He also found out about Solana’s life-long battle with cystic fibrosis.

People with cystic fibrosis rarely live past their 20s or 30s and Solana was 27. His heart ached.

Hearing of her struggles, Gary began to fully realize what his absence had meant to Solana. He talks now of the damage that that sort of rejection can do to a soul. He has regrets. Regret that she had to be the one to take all the risks and pursue him, regret of the years lost, regret that he hadn’t been there to support her through cystic fibrosis.

But overshadowing Gary’s regret has been his very tangible, personal and real experience with God. That God would put in him so much desire to love his daughter, prior to meeting her, informed Gary about how much God loves him. Just as Gary loves Solana because she is his child, God loves Gary because he is His child.

Gary says, “I nipped on the edge of [God’s love]. I didn’t know Solana. I didn’t know if she was large or small, pretty, nice, kind. I didn’t know anything. I hadn’t even heard her voice. But knowing the fact that she was mine, there was instant love.”

He held tightly to this powerful intersection of love and great pain as Gary and Solana began the hard work of building a relationship.

4 years later they continue to work hard to catch up. Through weekly phone calls and frequent visits they’ve made a long-distance father-daughter relationship work.

But Gary’s response has been fueled by his relationship with God. He hasn’t hidden his story. He wrote to his ministry partners and friends and allowed it to be published on Yahoo.com.

Because to Gary, this is a story where God is the hero, a story of God taking a broken situation, of God lighting the darkness, and bringing comfort to His son, His daughter and others.

Gary reflects, “I wasn’t real excited about drudging up all that stuff, but all that was super-ceded by an opportunity to get to know my daughter.”

What Gives Hope in the Crazy of Parenting?

We’ve all been there as parents. When the days seem too long or the problems too big to handle, where do we turn for support and encouragement?

What to Do in the Pain and Mess of the Unexpected

Do you feel like life is turning out to be harder and messier than you expected? You’re not alone! This article is the helping hand you need to learn how to build hope and gain a new perspective in troubled times.

Ideas to help show your Dad how much you care.