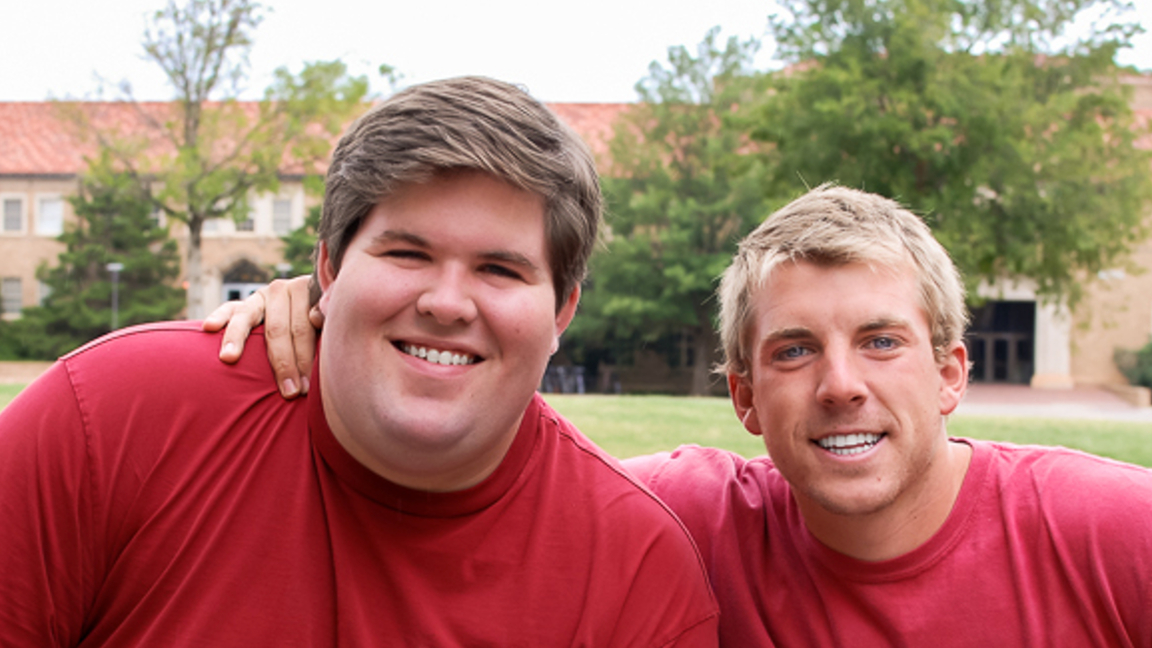 Dustin (left) had a rough start. His drug-addicted parents weren't around to be a presence in his life. He shared his story at a recent Cru meeting and opened with this:

"January 19th, 2010 at 8:05pm was the worst moment of my life. I was walking into my fraternity’s lodge for our chapter meeting and I received a phone call from my mom. She broke the news to me that my dad had passed away. I erupted in anger, threw my phone across the hall, and punched the brick wall. I hardly slept that night. The next day I packed my bags and made the 10-hour drive home. This was the most difficult trip I had ever made because every small thing reminded me of my dad and I felt I couldn’t get home soon enough.

The next day I had to take care of funeral arrangements and pick up some of my dad’s stuff from the police station. Collecting my dad’s things felt conflicting and surreal. Why did I have these? They should be with my dad, not me. That’s when the detective told me they had also found a crack pipe and crack cocaine. At this moment I felt as if the detective himself had plunged a knife deep into my heart. One more time I felt betrayed by my dad. After hearing that, I was so hurt that I couldn’t cry for the loss of my dad anymore. Now there was just anger."

I met Dustin a year after his dad’s death. I shared the gospel and he came to faith.

Fast forward to the present and the choices God put before him.

I was bummed when Dustin told me he wasn’t going to be able to go to our Cru Fall Retreat. He had a fraternity brother getting married that weekend. But his best friend Will challenged him to reconsider and to seriously pray about it. Late Wednesday night I texted Dustin and asked him what he had decided to do. He texted me back and simply said… “Wedding.”

On the next night, the Thursday before the retreat weekend, Dustin pulled me aside and said he had a confession to make. He hadn’t really prayed on Wednesday about going to the retreat. But now he felt strongly that God wanted him to go to our Fall Retreat instead of the wedding. His reason for the change? There was surely to be alcohol at the wedding… and for him, that was a constant struggle. Dustin was also planning to make the drive down with a girl. In his own words, “That's a recipe for disaster!” While Dustin knew that attending the wedding of a good friend was important, he also knew he needed to make a choice that would strengthen his faith, instead of one that would ultimately lead him to face temptation.

"Is it too late to sign up?" he asked. With a smile, I told him I thought we could squeeze him in.

What did God do with his choice? The next day, Friday, he and Will had lunch with a guy from his fraternity. Dustin would have already been on the road to the wedding by now, but the Fall Retreat location was much closer, so he had some extra time. He and Will took the initiative to share the gospel with their fraternity brother, who placed his faith in Christ! Before their eyes, he was transferred from the kingdom of darkness into the kingdom of light. In addition, it was the first time Dustin and Will had shared their faith without others around.

Now, every week, these young men are leading the charge by making bold choices that God can use. I am so proud of them. They motivate and inspire me to hold nothing back in my own pursuit of living a life pleasing to Christ.