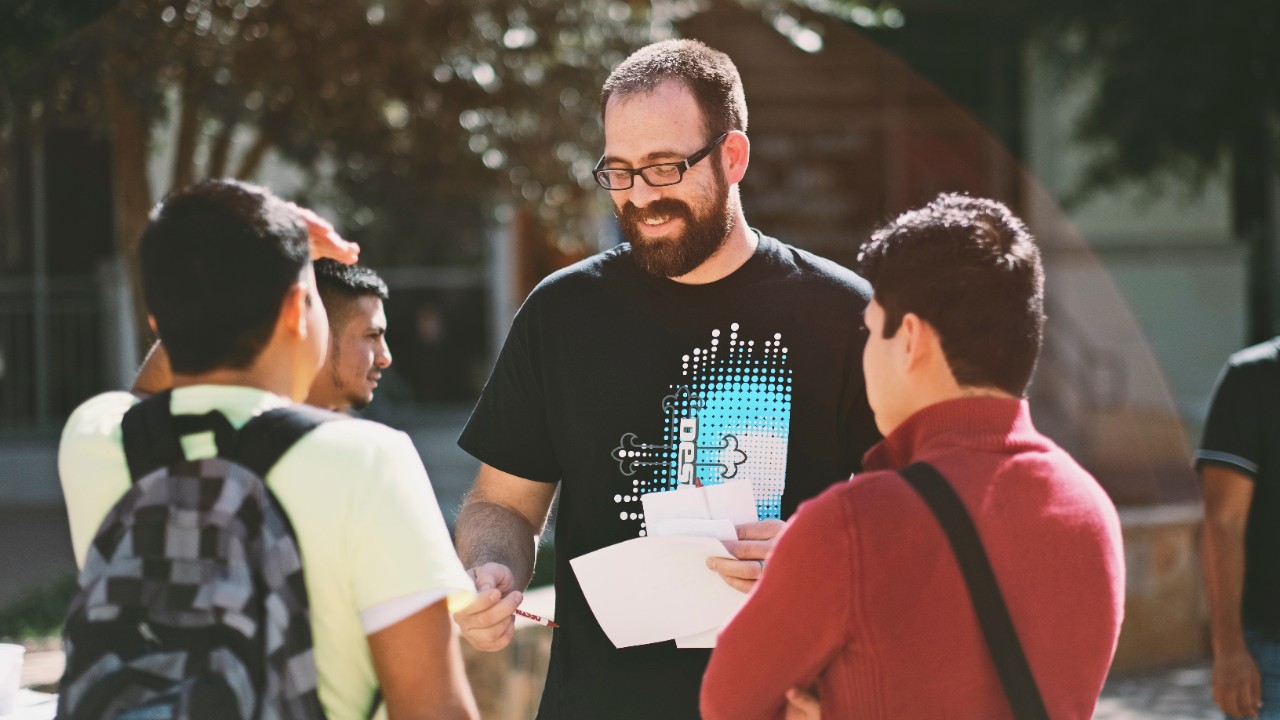 When you take on the task of reaching the world, you have to think big.

Leaders and staff members within Cru accepted Jesus Christ’s command to go to the world – the whole world – and teach what He said. The church calls it the Great Commission (Matthew 28:18-20).

Of course, we’ve never believed the task was ours alone to accomplish. As an international parachurch mission organization, we want to accelerate the efforts of others by creating strategies and giving them away.

Perhaps you’ve worked with us and you didn’t even know we were there alongside you.

Materials to Help You Tell Others About Jesus

In 1965, the founder of Cru, Bill Bright, wrote what he described as “the distilled essence of the gospel” into a booklet. Called Have You Heard of the Four Spiritual Laws? this little yellow booklet was translated into more than 200 languages, equipping Christians with a simple way to introduce others to God's love, truth and message of hope.

Similarly, another concise and transferable tract called Have You Made the Wonderful Discovery of the Spirit-Filled Life? was published and distributed around the world, teaching Christians how to live the Christian life in God's power, not their own.

Through the years, both tracts have been redesigned and repackaged. The originals are still available.

Cru staff member and apologetics expert, Josh McDowell, has written several famous books that detail the defensible facts of Christianity, including More Than a Carpenter and Evidence That Demands a Verdict.

Scholarly yet simple, these books combine logic and history to answer doubts about Jesus with compelling and persuasive data. The reader must decide: Will I accept what Jesus said about Himself? Will I surrender to Jesus and allow Him to change me?

The World’s Most Translated Film

When a movie about Jesus’ life debuted in 250 theatres in 1979, no one could have anticipated its lasting impact. But today, Cru has translated the JESUS film into more than 1,900 languages.

Considered one of the most valuable tools for accelerating the spread of the gospel worldwide, people learn about Jesus and hear what He said in their own mother tongue, receiving at film’s end an invitation to say yes to Jesus.

The movie has been shown in every country of the world. A host of versions are available, including one for children, for fans of soccer, and one for women, as well as an anime version in the works.

A good message bears repeating, but people in different stages of life don’t always hear everything the same way. Cru addresses unique audiences, staying true to Jesus’ commission. We want to tell others about Him in a way that is easy for them to engage.

Since 1951, we’ve gone to the universities of the world to turn “me-centered leaders” into “Christ-centered laborers.” On some campuses, every incoming freshman receives a “Freshman Survival Kit” (complete with an introduction to Jesus).

The Wide World of Sports

Cru’s sports ministry, Athletes in Action, sponsors the Sports Legend Series, which includes the NFL-sanctioned Super Bowl Breakfast and presentation of the Bart Starr Award given to one NFL player each year who was chosen by his peers for outstanding character.

EveryStudent.com is our most prominent evangelistic Website, reaching nearly 60 million students and adults last year. Articles and videos seek to answer people’s questions about life and God, giving them persuasive reasons to begin a relationship with God. People can also email a personal question and receive a personal email reply.

An average of more than 2,000 people each day tell us they have asked Jesus into their lives while on the site. In addition to offering a follow-up site for new believers, StartingwithGod.com, new believers are also encouraged to sign up for immediate follow-up. An average of 35-40% do so.

EveryStudent.com is now in 49 languages, making the concept of “closed countries” obsolete. The site is in Arabic, Chinese, Turkish, Persian, Urdu, and many others.

To find out how you can use EveryStudent.com to reach and disciple others, please see its resource site, EveryStudent.info.

And so much more

When someone is deployed with the military, that soldier might receive a Rapid Deployment Kit from Cru Military, including a camouflage Bible.

Through Cru’s ministry to the Inner City, we’ve assembled Boxes of Love and given them to inner-city churches to meet physical needs in the community. We’ve helped churches around the country start S.A.Y. YES! Centers, so they can provide at-risk children a Biblically-based curriculum afterschool.

As an organization, Cru does not seek recognition for these accomplishments. We’re committed to bringing attention to Jesus Christ so that one day, everyone might know someone who truly follows Him.

Lives change because of God, not strategies or ministries. To that end, we stay focused.