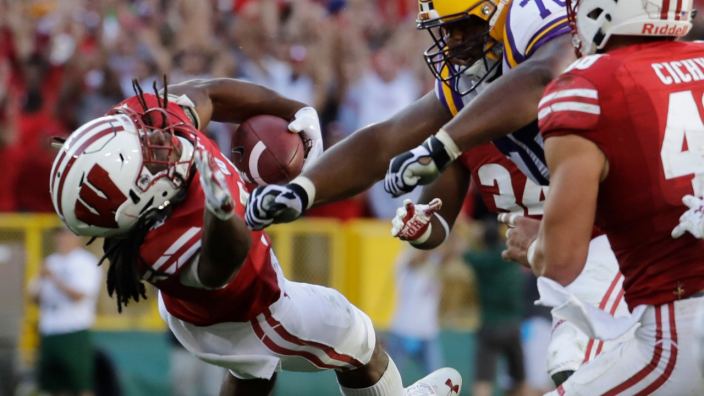 D’Cota Dixon had no idea what hit him.

One moment he was dashing upfield alongside jubilant teammates, celebrating his interception that sealed Wisconsin’s victory over highly-ranked LSU, and the next he was face down on the ground.

LSU lineman Josh Boutte had leveled him, shoulder-first, in a shockingly late hit. In comments to the press, Josh said that he didn’t see that Dixon had been ruled down a full three seconds prior.

Josh was ejected from the game but worse was yet to come. He walked off the field and straight into a social media firestorm. The accusations started flying.

Josh’s actions were labeled indefensible and dirty, at best. Spectators and media commentators called for blood: a multi-game suspension, dismissal from the sport, expulsion from the university.

The apparent lightness of the one-game suspension Josh received only fanned the flames of indignation.

Football is a brutal game. The eye-for-an-eye mentality is on display every autumn weekend. What charges a stadium full of 80,000 passionate fans and millions watching at home more than seeing bone-crushing hits, and emotions boiling over in what announcers call “extracurricular activities?”

But does the outcry for payback in this particular incident point to something larger within our culture?

Life delivers blindside hits from time to time: the crazy driver cutting us off in traffic, the co-worker taking credit for our work, the hurtful remark from a friend we never saw coming.

How do you respond to these crushing blows?

It’s all too natural to thirst for payback. How sweet it is when you see the speeding driver parked on the shoulder with a police officer standing at his window. How satisfying the fantasies of perfect comebacks that put offenders in their place can be.

We often characterize these desires as a longing for justice, but is it justice we want or revenge?

“People tend probably to hold grudges. When it’s against another team – your opponent, your “enemy” – I think people find it hard to forgive.”

Payback is part of the game. It can provide fuel for a player trying to raise his game. And we applaud it and buy tickets to watch it happen.

But something unexpected happened in the aftermath of the hit involving Josh and D’Cota.

Watch the last 10 seconds of the video.

As D’Cota lies dazed on the ground, his teammates rush after a retreating Josh Boutte, thirsty for payback. But when D’Cota pushes himself back up, he doesn’t join them. He immediately runs the other way. He doesn’t even look to his offender, he just sprints to his own sideline.

Josh called D’Cota two days later and apologized for the play, but D’Cota didn’t need the apology to let a grudge go.

“I had forgiven him a long time ago,” he says.

That knee-jerk movement to forgive, to turn the other cheek, is evident in those first few seconds, when D’Cota runs away from, not toward, his “enemy.”

Why was this such a natural reaction for him? Why did the instinct for payback and revenge not fill his heart in those moments?

D’Cota credits his attitude to a transformation he has gone through by being involved with Athletes in Action, a ministry of Cru.

“Before I was in AIA, I wasn’t probably as forgiving. I wasn’t like that growing up. I was really more of a true, hard-nosed football type guy,” says D’Cota. “I used to think football was my identity. Christ has changed my perspective on a lot of things.”

Immediately after D’Cota hung up the phone with Josh, he picked it right back up and called back. He‘d forgotten to pray. He remembered the recent Louisiana flooding, thought Josh might have had family affected, and knew that Josh was receiving heat from the media for his actions.

Josh’s call “made me want to engage in it more with him. That’s why I felt the need to pray. I wanted to pray for him,” D’Cota says.

In an interview posted on the New Orleans Times-Picayune’s website, Josh says he and D’Cota talked about their common relationship with God. The two have exchanged numbers and become friends through the ordeal.

Jesus told us, in Matthew 5:38-39 to forego taking an eye-for-eye and instead to turn the other cheek. The example of these two young men shows just how radical this behavior is.

Are you in a situation right now where it would be natural to want payback? As you think of Josh and D’Cota’s story, ask yourself – which way will I run?

You can read more of D’Cota’s story at the Athletes in Action website.

Thanks to Brian Smith, Athletes in Action staff member, for his assistance with this story.