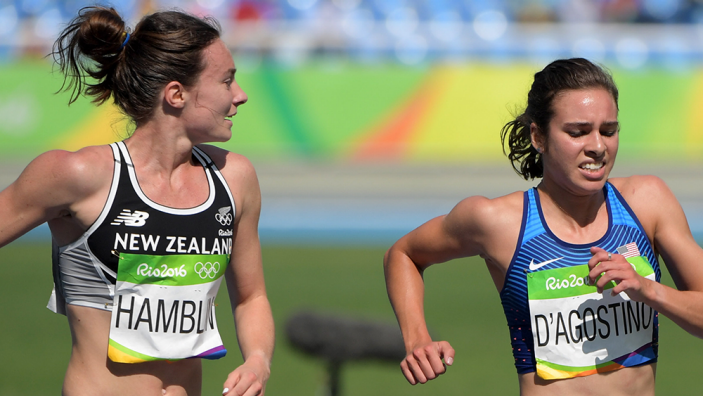 Photo by Image of Sport

Already lauded as one of the top sportsmanlike moments of the Olympic Games, Abbey D’Agostino's run in the women’s 5000m will continue to be talked about in years to come.

Not because she won.

Not because she finished despite being injured.

But because she thought of her fellow racer first.

As they began to move toward the final grind of the race, Abbey and Nikki Hamblin tumbled to the ground. Abbey got up, but seeing Nikki still on the ground, she turned to Nikki and said,"Get up, get up, we have to finish this.” She helped Nikki up, though she was injured herself. She had torn her ACL, her meniscus and strained her MCL. She went on valiantly to finish the race, and to touch the hearts of people around the world.

It turns out, God had been preparing her for such a time as this.

“Although my actions were instinctual at that moment, the only way I can and have rationalized it is that God prepared my heart to respond that way,” she said. “This whole time here, He's made clear to me that my experience in Rio was going to be about more than my race performance – and as soon as Nikki got up I knew that was it.”

In Abbey’s early years, her life was focused on accomplishment and success, both in academics and athletics. She had an inner drive to succeed. But this drive was fueled by her own belief that she was in some way lacking, and that she had to constantly earn her place. In those years, Abbey may have responded to falling in the Olympics much differently. But God has changed Abbey’s life.

"God has taken me on an unparalleled journey,” Abbey said about a week before her race. “I feel like I have learned so much through this spring … there have been a lot of ups and downs. But I would not have been able to learn any of the lessons and I would never have reached such a familiarity and understanding of Christ without the way that it's happened. It has been a season of waiting and uncertainty as I recover from injuries. That has really exposed to my heart my relationship with running."

Through these trials, Abbey has realized the place that running has in her life – second to Christ. What she wants most is for Christ to be first in her life. When asked what a successful Olympics would look like for her, Abbey responded, “I hope my experience here is a reflection of that."

Going into her race, Abbey knew that how Christ might choose to make these Olympics a focus of “Him first” might not look the way she expected. “That doesn’t manifest in medals all the time,” she said. “Sometimes it does, but it doesn’t always. Sometimes it means coming in last place.” Prophetic words from Abbey as it turns out.

Abbey has been involved with Athletes in Action, which has been a significant part of her journey with Christ. While talking to an AIA chaplain in the village, she felt like it all came into perspective. He said to her, “We don’t know if the day of your race will be Good Friday or Easter Sunday. We hope it is Easter Sunday. But if it is not, it is not the end.” Words that have surely bolstered her in these last days.

More stories from the Olympics: