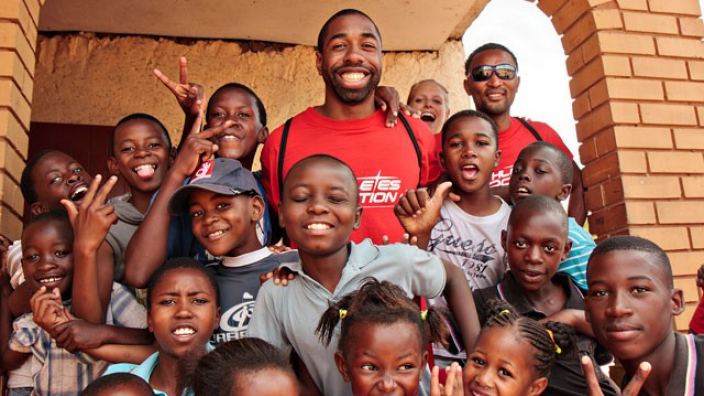 Professional soccer players share the gospel with 500 people during an Athletes in Action trip.

The trip was years in the making. As Athletes in Action’s presence in American professional soccer grew, chaplains serving the league began to sense a need for players to experience serving others in ministry outside of their typical context.

“The MLS chaplains have said for years that our guys wanted to do this,” says AIA staff member Zach Blaine. “We decided this was the year to go for it.”

Blaine began investigating places where he could take a team of pro athletes that would allow them to grow in their faith, while simultaneously lending support to local outreaches.

South Africa quickly rose to the top of his list.

“I found that it was actually strategic to go there,” he explains. “Chris Dirks [AIA staff member in South Africa] saw how our presence could be a huge benefit to his ministry.”

This past December, Blaine and a team of 16 people, including 6 professional soccer players, spent a week and a half in Johannesburg and Pretoria.

The experience turned out to be greater than anyone had expected, evidenced by the effects that are still resonating in South African townships and the hearts of athletes involved.

Upon arrival, one of the team’s first service opportunities was to visit a hospital for AIDS/HIV patients located outside of Johannesburg. It was an eye-opening experience.

“We toured the facility and got to hear the story of how it was founded. It literally has become a community of outcasts. You don’t realize how much of a stigma AIDS has and how much of a stigma you feel about it until you’re put face-to-face with someone who has the virus,” says Michael Lahoud, a midfielder for the Philadelphia Union. “In the end you realize they’re little kids and adults just like you.”

Additionally, the group participated in a variety of service projects and outreaches at churches and orphanages in the townships of Shosanguve and Thepisong (near Pretoria), leading soccer clinics and sharing their faith stories.

“I think we saw a lot of growth and confidence in everyone’s faith – not just making it a private matter but something that we are more comfortable with and speaking about publicly,” says Matt Gold, a midfielder for the Charlotte Eagles. Gold credits training the team received on sharing their faith stories for helping them to feel confident.

“We’d kind of go in a rotation. Someone would share their story and share the gospel,” he adds. “At first you feel a little thrown into it and don’t really know what to say. But you learn not to worry about it, to just be trusting that God would give you the right words – that He’ll take care of it. And He did.”

Opportunities to speak about their faith came in the context of service and relationships, as they played soccer with local kids, invited them to a clinic where they ran drills and played keep-away, then invited them to church.”

“Joy and peace are not circumstantial”

The outreaches were instrumental in building sports ministries at the churches where Dirks had begun partnerships years earlier.

“There’s more involvement now, as more people in the community have caught the vision of sports ministry. The church is now planning a sports outreach every 8 weeks,” says Dirks.

The team’s work at an orphanage – serving lunch, cleaning, doing laundry and helping with yard work – has also opened doors for a partnership with local churches. According to Dirks, people from both churches with whom the team worked are now visiting the orphanage weekly.

In total, through service projects, church outreaches and team Bible studies, the group shared the gospel with more than 500 people during their visit.

On top of the local impact of these projects, the players agree that the outreaches taught them lessons that they’ve taken back home with them.

“The people I’ve met there have such beautiful smiles even in the face of the very little so many of them have,” says Lahoud. “I can take [home with me] their contentment in the place [where] God has them while still clinging to the hope they have in God.”

Sean Kelley, goalkeeper for the Orlando City Soccer Club, agrees, “Even though so many have so little, I saw that God still showers His love on those who follow Him. It is very encouraging to see this, reinforcing my belief that joy and peace are not circumstantial.”

“You go there to serve, but our guys felt like they were served so much more than they could ever give,” adds Blaine.

Check back later this week to see how the Americans were changed by their South African hosts.