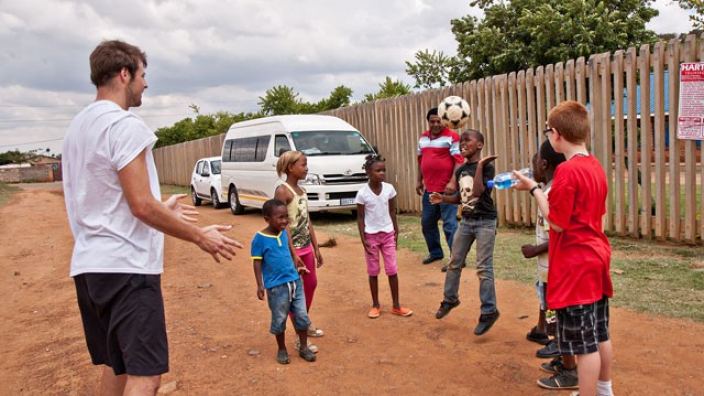 Athletes from different parts of the world find they have more in common than they thought.

In addition to service, the other major component of the tour was the opportunity for the U.S. players to spend time learning from and encouraging their South African counterparts.

“One of the highlights was to have the [American] pro players stay with our pro players,” says Dirks. “I think the relationships they were involved in were great. Our guys were encouraged by them as well.”

“I got to live with another professional player, Ryan Chapman [forward for the Bidvest Wits],” Lahoud shares. “It was a pretty awesome experience. Ryan and I are the same age and at a similar point in our faith and careers, realizing that our identity isn’t as a soccer player. Our identity comes from a much bigger thing. It really felt like I was sharing life with a friend.”

“Wayne Sandilands was my host and a goal keeper, my same position, for the Mamelodi Sundowns,” says Kelley. “He impacted me quite a bit during the few days together, mainly by showing me a great example of how to depend on God in all aspects of life; from being a family man to on the field, I could see how he relied on the strength God provides him.”

“Even though they’re across this huge ocean, their God isn’t different from ours”

As the U.S. players teamed up with their newfound friends to lead Bible studies for a handful of local teams, they were amazed to discover that the dynamics of what the South Africans were doing to reach out to their teammates was nearly the same as what they had been experiencing at home.

“There was a commonality of being brothers in Christ, even though their environments might be different,” observes Blaine.

“Even though they’re across this huge ocean and on another continent, their God isn’t different from ours,” says Gold.   “I learned we all serve the same God, and I am just so thankful,” adds Aaron Horton, forward for the Columbus Crew.

The presence of the American players also helped to open new doors for ministry, as the group was invited to talk with the AmaTuks, a PSL team where Dirks was not yet connected. The visiting athletes invited the players to a new team Bible study, which now has 9 players attending regularly.

Watching the South Africans also made the U.S. players aware of ways that they can take ownership of the outreach to their teammates at home.

“One difference I thought was cool there is that instead of AIA trying to provide a chaplain for each team [like in the U.S.], it’s more like picking one player on each team, and putting more effort on discipling one person there [who is the spiritual leader on the team],” says Gold.

“We want to see people own their ministry,” explains Dirks. “Eventually when the guys stop playing football, their ministry won’t stop when they get out into the business world.”

The positive impact of the tour on both the players and local ministries has confirmed Blaine’s hope that similar trips will continue to be available for professional athletes.

“The trip was such a success that we already know we want to do this next year,” says Blaine. “Players are telling us that all of their friends want to come. We believe that this tour and the fruit produced from it will catch like wildfire around the league.”