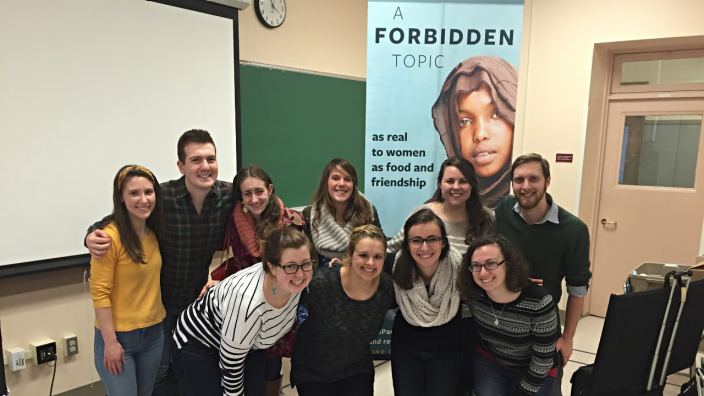 Stories from Our Team

“Ryan* had tons of questions – he was almost grilling us, asking us all about human trafficking during our first event.

While we were talking, I had this feeling he must have some personal connection to this issue. But before I could ask him any questions, he was on his way.

Wednesday we hosted a community gathering to share more about the realities of human trafficking. An intern from our team shared about his time spent doing relief work in the Red Light District of Amsterdam. We heard also from Emily*, a trafficking survivor who is from Fargo. She opened up about the time she’d lost while a victim, but also the redemption and hope in her escape and recovery.

After the meeting I noticed Ryan in the crowd of students and community members in the room. I stood and watched as he approached Emily. It looked like they talked for a minute, nothing out of the normal. A minute later I see Ryan reach for Emily and bring her into a long hug. Something from Emily’s story had touched Ryan’s heart.

Once he had left, I went to Emily to ask for more details on their conversation. She told me he had approached her because he did have a personal connection to trafficking – as someone who had previously trafficked two women. Ryan has shown interest in hearing more about what it means to have a relationship with God.

When planning Justice Week, I knew God was going to move in big ways, but it never crossed my mind we would actually meet someone on the other end of the story. It was amazing to see God reach out to not only the oppressed, but also the former abusers – offering freedom to all. Pray for Ryan as we meet to talk more about God and justice.”

Over the course of the week, Lola saw over 1,000 people exposed to the news of worldwide human trafficking.

It doesn’t stop there!

An RA posted statistics linking human trafficking and pornography in his hall.

A male student is excited to start raising awareness within his fraternity and the entire Greek system.

And Lola and some friends are starting a local group to work against trafficking on a local level.

*Pseudonyms used to protect the privacy of those involved

Thankfully, we are not left alone in the battle against injustice in our world. We have a God who cares deeply about those enslaved everywhere. He knows them by name. And He’s already given us an invitation into their stories of freedom and redemption thousands of years ago.