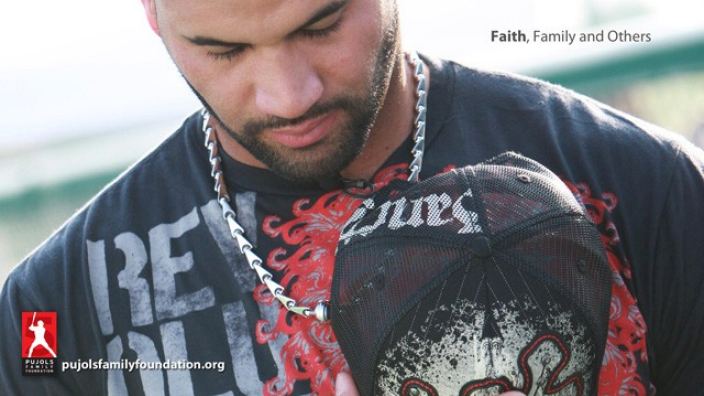 Albert Pujols uses his success in baseball to reach out to others.

Baseball powerhouse Albert Pujols has won many awards over his career in Major League Baseball. But of all his accolades, the Roberto Clemente Award he won in 2008 is most precious. Given to a player who combines outstanding performance on the field and work in the community, the Clemente Award is special to Pujols as he has taken seriously the New Testament mandate to care for “the least of these.”

Through his Pujols Family Foundation, started in 2005, Pujols has been able to improve the lives of children and youth with Down syndrome or other debilitating illnesses as well as underprivileged children in his native Dominican Republic. To Pujols and wife Deidre, the foundation is a perfect way to live out their faith in Christ and show God’s love to others.

Pujols began practicing baseball as a child, using limes for balls and a milk carton for a glove. The family immigrated to America when Albert was 16, and he was named All-State twice in baseball. After graduating high school, he earned a scholarship to a community college, where he played shortstop and displayed impressive batting skills before opting to enter the MLB draft. He was picked up in the 13th round in the 1999 draft by the St. Louis Cardinals.

After a few seasons in the minor leagues, Pujols made his major league debut in 2001, playing a variety of fielding positions. That season won him several monthly rookie awards, the NL Silver Slugger Award for third base, and NL Rookie of the Year. He had strong seasons the next decade, earning All-Star honors nine times; the NLCS MVP for 2004; three NL MVPs and four ESPY Awards for Best Baseball Player; two NL Gold Gloves for first base; five Fielding Bible Awards for first base; five more Silver Slugger Awards; Sports Illustrated Player of the Decade (2009); two Hank Aaron Awards; and two World Series rings (2006, 2011).

He signed a 10-year deal with the Los Angeles Angels of Anaheim before the 2012 season and saw steady success after a slow start. His home run on Sept. 12 was his 30th, making him the first player in major league history to hit 30 home runs in his first 12 seasons. The season also saw his 500th double.

Pujols and wife Deidre have five children and live in St. Louis. Albert earned his American citizenship in 2007. The family also owns a restaurant in Maryland Heights, Mo., and he worked with a group to bring a major league soccer team to St. Louis. The franchise bid was unsuccessful but a minor league team was created.

Pujols began his relationship with Christ in 1998 and the family lives out their beliefs through service and outspoken faith.

“My life's goal is to bring glory to Jesus,” he says. “My life is not mostly dedicated to the Lord, it is 100% committed to Jesus Christ and His will. God has given me the ability to succeed in the game of baseball. But baseball is not the end; baseball is the means by which my wife Dee Dee and I glorify God. Baseball is simply my platform to elevate Jesus Christ, my Lord and Savior.”