Is Jesus Worth It?

How to keep your faith in an uncertain world. 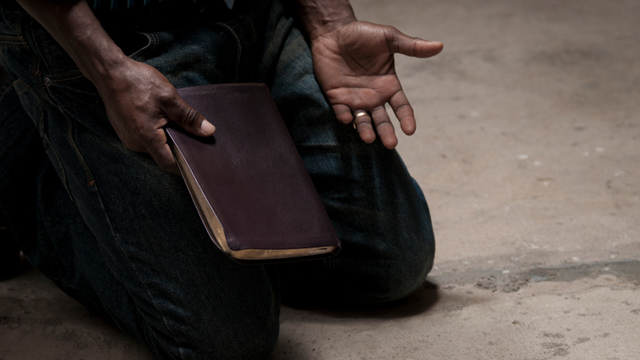 If someone asked you what your biggest dream was, what would you say? As a high school student the answer was easy for me – to play college basketball. Even though I was short, I was determined to play hoops at the next level. I often practiced alone for hours in the morning, late into the night after practice, and many times in the blistering snow. “Whatever it takes” was my attitude, and I loved it.

But when I got to college, players were quicker, taller, and much more athletic than I was accustomed to. While I did make the team, I rarely played my first two years. As a result, I nearly gave up. Why keep working hard, I reasoned, if I’m not going to play anyway? At this stage in my life the cost of playing college basketball, even though it was my dream, was beginning to outweigh the benefits.

Is it worth following Jesus?

If you have been following Jesus for more than twenty minutes, you have probably experienced moments of doubt, uncertainty, and even anger at God. This is normal. Is it really worth being a Christian when the cost is so high? Like my dilemma with college basketball, you may have wondered if it’s really worth the effort to continue believing in Jesus. Maybe you have felt like the Psalmist who said, “But as for me, my feet came close to stumbling, my steps had almost slipped. For I was envious of the arrogant as I saw the prosperity of the wicked…surely in vain I have kept myself pure” (Psalm 73:2-3, 13).

I remember feeling this way as a high school sophomore. Since I grew up in a Christian home I had heard countless messages on “saving sex for marriage.” The consequences of ignoring God’s plan were engrained in me since I was young. I knew the reality of sexually transmitted diseases and other consequences of not waiting. But as much as I knew these things to be true, they didn’t seem to fit my experience. Quite a few of my friends were having sex but none of them (as far as I knew) had an STD, went through painful break-ups, or were particularly miserable. In fact, many seemed quite content with their choices. I honestly wondered, If my non-Christian friends seem to be getting along just fine without obeying God, is it that important to remain faithful?

If you have ever honestly wrestled with your faith in God, then the following thoughts are for you.

Embrace the difficulty and cost of faith

For some people, believing and trusting in God appears to be quite simple. I am not one of them. Faith is not easy for me. In a world that emphasizes the present rather than the eternal, the powerful over the meek, and the visible rather than the invisible, I find it a struggle to live daily for God. It simply is not natural to die to myself and to live for God.

For the longest time in my life I really thought I was alone in this struggle. But when I began to read the Bible more carefully, I realized that almost every character in the Bible struggled with trusting God at some point in his or her life. Joseph wondered why he was sold into slavery. The disciples wondered why Jesus (whom they believed was the Messiah who would free Israel) was betrayed, beaten and ultimately crucified on the cross. Job wondered why as a righteous man he was experiencing such acute suffering.

Similarly, you may have wondered why your parents got divorced, why a close friend betrayed you, or any number of other difficult circumstances you find yourself in the midst of. If so, you are in good company.

Even though faith may not always make sense from a human perspective, we can trust that God is good and that He has a plan for everything. God never let go of the steering wheel while David was fleeing for his life from Saul, while Abraham was about to sacrifice his son, or when Joseph was sold into slavery. This is why Joseph says to his brothers after revealing his identity, “As for you, you meant evil against me, but God meant it for good in order to bring about this present result…” (Genesis 50:20).

Imagine putting a chocolate-chip cookie in front of a 3-year old and asking her not to eat it. Do you think she could resist? Recently some researchers did exactly this to study the human will. Children were given a single cookie with the promise that if they didn’t eat it for five minutes they would be given a second. While some of the children resisted the temptation others simply could not. The researchers found that the children who resisted the cookie at 3-years old were far more likely to succeed in school, relationships, financially and in their future careers. Why? The simple answer is that success requires delaying present desires for later gratification.

Ask yourself an honest question: How are you giving up long term good for a present thrill? Think about your decisions with money, school, and even sexual purity. Are you sacrificing God’s great plan for you for a temporary pleasure?

Many of my friends who were sexually active in high school are now paying a heavy price. Some have been divorced and others have in fact gotten STD’s. Even though I felt like giving in to the pressure, I am so thankful that I had the strength and support to focus on the long term. It wasn’t easy, but it was worth it. You may not feel like continuing to follow Jesus and doing the right thing now, but it will be worth it in the end. Remind yourself that God will bless you in unimaginable ways if you remain faithful now.

Never underestimate the difference you are making

When I was a freshman in high school the senior quarterback, Eric, said something to me I will never forget. One Saturday night I was hanging out with some friends in my hometown, when the lineman on the football team tried to pressure me into having a drink of alcohol. And for some reason he wouldn’t take no for an answer. As soon as he noticed, Eric came to my defense. He walked over and got right in the lineman’s face and said, “Leave him alone. I’ve decided not to drink, too. Sean has inspired me not to drink. I’ve never seen anyone stand up so strongly for what he believes. So don’t pressure him.”

To be honest, I was shocked to hear him say that. The reason I wouldn’t drink is because I made a promise to my parents that I would not have even a sip of alcohol throughout my high school career; nor would I let someone who had consumed any alcohol into my car. But I had never thought how my choices could influence someone else, let alone the captain of the football team.

While this story worked out for good, I could tell you stories of when I failed to live up to what I believed too. I have made poor decisions at times that I know reflect poorly on me, my family and my Creator. But this experience taught me a profound truth – we can have a powerful impact on people’s lives even when we don’t realize it. Trust me: people are watching your life. If you decide to live for Jesus you will make a difference – even if you don’t realize it.

As I look back on my basketball career, I am so thankful that I did not give up. My last two years of college I was part of two different teams that went 28-6 and 30-7, with two visits to the national tournament. And my senior year I was fortunate enough to be a team captain. Had I given up too early I would have missed out on incredible opportunities for growth and fun.

Similarly, as I look back on my spiritual life, I am so thankful that I have continued to follow Jesus. There have certainly been trials and temptations, but there is no doubt in my life that it has been worth it. Keep the faith.

What It Means to Live Free