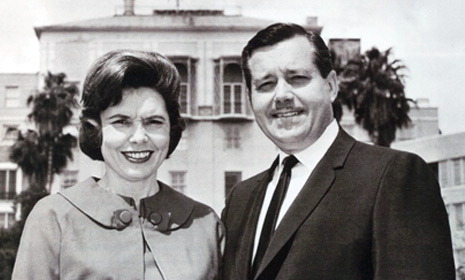 In 1951, Bill and Vonette Bright pursued their passion for ministry by starting Campus Crusade for Christ (now known as Cru in the U.S.) at the University of California at Los Angeles.

What began with college students has since grown into one of the largest international Christian ministries in the world, reaching beyond students to serve inner cities, the military, athletes, political and business leaders, the entertainment industry, and families.

Bill's unique blend of Christian commitment and communications insight was at the heart of his success.

His Four Spiritual Laws booklet – a 4-point outline written by Bill in 1956 on how to establish a personal relationship with Jesus – has been printed in some 200 languages.

Although religious tracts have been published for centuries, Bill's booklet has become what is considered to be the most widely-disseminated religious booklet in history, with more than 2.5 billion booklets distributed to date.

Bill effectively employed other communications vehicles over the years as well, including books (he authored more than 100 books and booklets), television and radio, the Internet, billboards, phone banks, movies, videos, and international training conferences reaching hundreds of millions.

Bill was considered a major catalyst for the modern-day resurgence of the disciplines of fasting and prayer in the Christian church.

Bill Bright died in 2003, from complications related to pulmonary fibrosis, at the age of 81.

Vonette's commitment to prayer led to the founding of the National Prayer Committee, a group of prayer leaders who seek to motivate other Christians to unite in prayer for spiritual awakening.

In 1988, as chair, she was successful in introducing legislation unanimously approved by both houses of Congress to make the first Thursday of every May the permanent date for the National Day of Prayer.

Among her other work, Vonette authored more than a dozen books, and in 1993, she launched Women Today International, a ministry to and for women.

Under her leadership, Women Today is responding to the needs of women to grow in their relationship with Jesus Christ.

Vonette Bright died on Dec. 23, 2015, from complications related to acute leukemia, at the age of 89. Read more about her life and legacy at VonetteBright.com.

Bill and Vonette – Honored for Their Achievements