An Oklahoma wrestler learns how to live for Jesus. 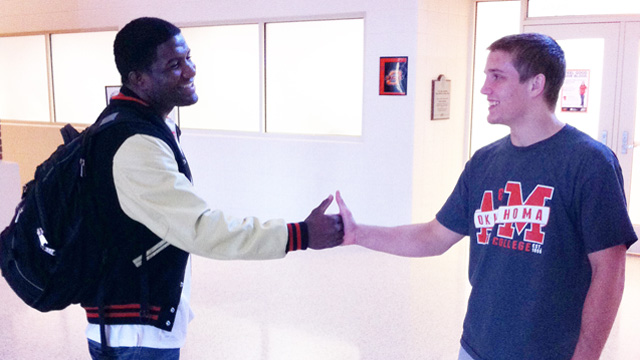 It was in high school watching one of those TV preachers that they said a prayer and I said it with them. “I choose to make you my Lord and Savior.”

But, it wasn’t until I got to college that I said, “this is what I have to do with my life. I’m going to accept Christ. He died for my sins. This is it.” The people at Athletes in Action had a lot to do with that.

Coming to college last year was weird, coming some place where you don’t know anyone. It was an adjustment. I spent so much more time on my classes, and wrestling was a lot harder than in high school. It really took a toll on me.

Getting involved with Athletes in Action helped a lot, having a support system and friends to talk to.

I found out about it through these two big seniors on my wrestling team who said, “Come to Athletes in Action.” I was like, “alright. I’m not doing anything else.” I was a little hesitant at first. I wasn’t familiar with these people. I didn’t know anything about them. They basically dragged me to some of the events.

But once I got there, I loved it. Everybody was so friendly, like you already knew these people, and I had never been with people who were just so able to talk about God.

It was big. We talked about the Knowing God Personally booklet.

One thing I remember clearly is the picture of us being separated from God and Christ being that bridge that closes the gap.

I thought, “Wow, that’s cool! He died for me. He is the payment for my sin, so this is what I’ve got to do.” That was a big part of getting to know him better. Knowing more about what He was doing in my life and the stuff he was revealing to me.

I had never spent much time in the Word, and they really focused on the gospels and other books of the Bible, what it means to live a Christ-like life and what He has done for us and prepared for us.

One guy on the wrestling team is in that process of figuring things out and coming to know God. He asked if I would be his sponsor, sort of a spiritual guide. We started going to these classes at my church and, every day, we walk back and talk about anything under the sun about God.

The guys at Athletes in Action have had a big part in growing me spiritually. Just seeing how they are sharing the gospel, I feel like I am able to share better with people I’m around.