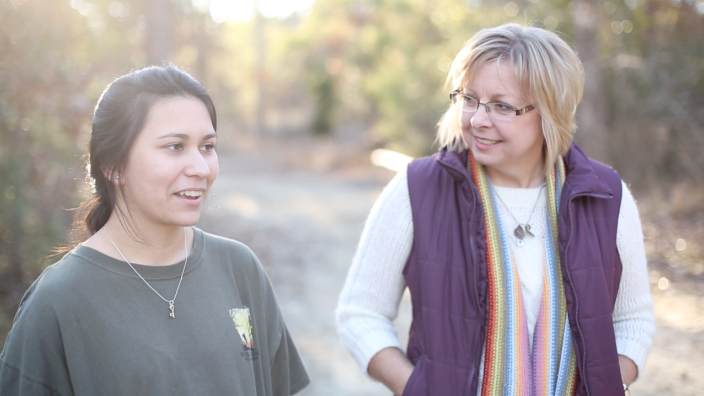 How to help your child trust

Christina Trautner was 10 years old when a woman from Child Protection Services arrived at her door. “You have to leave your family because we are taking you to live with another family,” she said. “You have one hour to gather what you most want to take with you.”

Choosing some clothes and her favorite soft toys, Christina had just enough to fill a bucket. Clutching her favorite toy tight to her chest, she climbed into the CPS worker’s car and sat, silently, as she was driven to a family who had chosen to foster her. The CPS worker asked her questions as they drove, but Christina refused to break her silence, afraid of the future.

“When she arrived she just looked small in every sense,” says Laura Trautner, the woman Christina would eventually dare to call Mom. “We had told the CPS that we thought we were best suited to fostering a child who needed to be brought out, helped to flourish, rather than one that needed reigning in.”

Over the past six years Laura, a staff member with Cru, and her husband John, who teaches at his daughter’s high school, have patiently created a home for Christina - a safe place where she’d have the opportunities her birth home would never afford her.

The specific things they emphasized can help any child step into their calling.

At age 12, Christina stood in a courtroom before a judge who asked her, “Do you choose this family to be your family from here on?”

“I do,” Christina replied. Laura remembers the moment vividly, describing it as feeling like a marriage.

“My mom wanted to choose something to place on a charm bracelet to signify their adoption of me,” says Christina. “Then we found a jigsaw piece that fit perfectly. Mom told me that our family had been incomplete without me, I was the missing piece in the puzzle.”

A year ago, Laura and Christina decided joined a group of Cru staff and high school students from Houston on a spring break trip to Hungary.

As they befriended Budapest high schoolers, Christina remembers meeting girls she describes as, “model-like.” “But I would ask them, ‘Is there anything you would like to change about yourself,’ and they would reply ‘everything.'”

Christina wanted to help those girls recognize how treasured they were by God, but knew she needed to first believe that more deeply about herself.

Christina brought the lessons of the Hungary trip home to Kingwood Park High School outside Houston, where her mom works for Cru’s high school ministry. She brought the change in her own life into a place where she sees girls sitting alone in the cafeteria or walking in the athletics corridor, painfully self-conscious.

“I was never comfortable in the Athletics Corridor, then I felt God telling me to join the cross-country team, that he was going to use me there,” says Christina. Her adopted father John is a keen runner. Christina recently led her first Bible study with her cross-country teammates. She was nervous, but knows she’s become a safe place for other students.

Ana Acosta is one of Christina’s closest friends. “I think a lot of people inside the school try to fit in. They don’t act like themselves at school,” says Ana. “Christina’s the same inside or outside school. She doesn’t really care what people say or think about her, and that’s helped me throughout my high school years.”

Her experiences have created a passion in Christina to eventually work with kids in foster care. She says her Mom gets emotional thinking about how amazing it is that she wants to help people who are where she was, rather than never going back there.

Kingwood Park High School is changing along with a student and a family God labeled ‘chosen.’

The question that changed a life

Do you have a heart for reaching inner city teens with the gospel? This ministry to middle and high schoolers reaches far beyond the school building into the families and communities they surround. Could God be calling you to join them?