On December 23, 2015, Vonette Bright passed away due to complications from acute leukemia. Read more about her story and legacy. 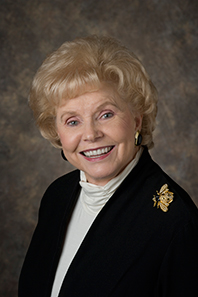 She earned her BA in home economics from Texas Women's University and did graduate work in the field of education at the University of Southern California. Vonette taught in Los Angeles Schools before joining Bill full-time in Campus Crusade.

Bill and Vonette have 2 married sons and 4 grandchildren.

Vonette's commitment to help reach the world for Christ has fueled a passion for a prayer and desire to help others develop a heart for God. She serves as Chair for The Bright Media Foundation and maintains an amazing schedule from her home in Orlando.

Bill and Vonette celebrated 54-1/2 years of marriage prior to Bill's graduation to heaven in July 2003.