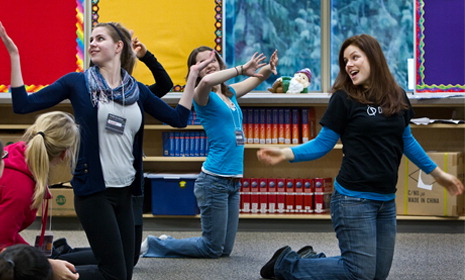 Laura Bull leans back in her seat on the bus, filling her lungs with what feels like the first deep breath she’s taken all week.

As a student in the counseling psychology graduate program at the University of British Columbia, Laura must constantly look smart, sound smart and interact confidently with her colleagues. Yet as her mind shifts from academic mode into the night ahead, her stomach knots up.

What if one of my colleagues walks by tonight? Oh, Lord, I’d be so embarrassed! But if You want to bring someone I know, please prepare my heart for that.

She steps off the bus and exhales to release her anxiety, inhaling the familiar smell of hot dogs and city air.

For the past 8 years, Laura has spent many Friday and Saturday nights performing in street dramas with a ministry called DRIME on Robson Street in downtown Vancouver -- a street known for its restaurants, shopping and street entertainment.

While most people would be nervous to perform and talk with strangers, Laura’s nerves are twisted with the mere possibility that her academic world may bump into her DRIME world tonight.

Started by Tanya Price in 1994, DRIME stands for Disciples Ready in Mobile Evangelism. Tonight, that acronym -- in white on a black T-shirt -- identifies the 18 people who will be using drama as a way to engage people in spiritual conversations.

“We may just be one step in the process [of someone coming to faith in Christ],” says Tanya. “Once people stop to watch the dramas, we do a lot of listening. And the drama itself is a natural transition into talking about spiritual things.”

An alternative-rock song booms out of the speakers as the performers begin their night by depicting the life, death and resurrection of Jesus.

Laura joins a family who is leaning against the construction fence and asks, “Have you seen this drama before?” They haven’t. “The man in white is Jesus. That may help you understand.”

They nod and continue watching. The 5-year-old daughter’s eyes follow the expressions on the performers’ faces, mesmerized by their sharp dance movements. The drama finishes and the man tells Laura it was nice to meet her.

As he and his family continue down Robson Street, Laura removes her gray pea coat to perform in the next drama. She remembers her thoughts on the bus and surrenders her anxiety about her counseling colleagues again to God.

“I can start a conversation with a stranger so easily,” Laura says. “DRIME is such a vulnerable, open place.”

But Laura’s natural boldness about Christ often goes into hiding during her week as she converses with her counseling colleagues at UBC.

While depicting the manipulative persona of evil in a drama, Laura notices the thoughtful gaze of a 20-something woman at the edge of the crowd. The drama ends with 3 of the characters bowing in reverence to Christ while the other 3 stand stiffly with their backs toward Christ, and their faces hardened to His love.

Laura is writhing angrily on the wet ground as if in shackles, depicting the defeat of the enemy while Jesus stands in victory. The song ends.

Laura grabs her coat and walks toward the woman who had caught her eye. In the sea of stoic faces, Laura’s laughter rises above the next upbeat song as she introduces herself to this woman named Jill.

Laura’s confident warmth puts Jill at ease -- completely oblivious to the high heels, foreign languages and loud music that compete with their conversation. Laura listens intently to Jill, just as she’s learned to do over the years on this very sidewalk.

She sighs with empathy about their similar experiences and helps Jill to recognize God’s love throughout her story. Laura ends the conversation an hour later by praying aloud.

Jill looks up at the end of Laura’s prayer with tears in her eyes, “Your name’s Laura, right? It’s totally God how you were able to see some things in the whole mumbo-jumbo of what I just told you about my life. It’s nice to have someone pray for me.”

They exchange email addresses and talk about meeting later for coffee.

That evening, Laura bursts into the house, asking her husband, Jason, “Can I tell you about my night tonight?”

He closes his laptop with bright eyes and an expectant grin as she sits down across from him at the table.

“I was able to be 100 percent myself and share with Jill about my experience as a whole person,” she says. “I didn’t have to hide anything; I was just honest.”

It’s with this honesty that Laura longs to merge her 2 worlds -- DRIME and her counseling program. She’s nervous about the reaction she may get from her colleagues, but she wants to value them by being transparent about her whole life.

So, again exhaling her anxiety, Laura decides to take a step of faith toward merging her 2 worlds. She composes an email to her colleagues inviting them to her next DRIME performance.

She presses “send” and offers up her emotional flood of anxiety and hopefulness in surrender to God. Within the day, she hears back from 3 of the 4 people in her peer supervision group.

“To be invited to participate in what you perceive to be such a private part of your life is such a privilege for me,” David replies.

All 3 of her colleagues say they feel honored by the invitation, though none can come. Julia adds, “[The DRIME performance] is not really my thing. I approach my spirituality in a different way.”  One more exhale.

Laura has studied with these counseling students for 2 years -- just enough time to be acquainted with their kind hearts, and their discomfort and distaste for Christianity. But now she is ready to humbly extend her faith to the very colleagues by whom she’d been previously so intimidated.

“In my early years of being a Christian, I would always be sharing Christ with people with a stamp of pride. Now, it’s less about I’m right and you’re wrong and it’s more about letting them see who I am -- knowing that my identity is in Christ, and God gave me that.”

After sending out her initial email, she talks to her colleague David more extensively.

“He admired what I do with DRIME and he was interested and asked questions about my faith. He talked about his bad experiences with religion and said that our conversation was a good experience.”

Just like the flow of conversation on Robson Street, Laura’s conversation with David moved fluidly from DRIME ministry to his spiritual background and curiosities.

“The threads of my life are starting to weave together into something that makes sense,” says Laura. “There is a real beauty in all of this.”

As she anticipates David and Stu, another colleague, attending her next DRIME performance, Laura reflects on all the times during her peer supervision group that she had prayed silently, God, my heart is aching to say something right now, but I just don’t know how to start.

She had no idea one simple email would start something so exciting. In DRIME, she frequently takes steps toward strangers. Now, she’s stepping toward friends.