Even as a young child, Parfait Mitchai was haunted by the fear of death.

Parfait grew up in Benin in western Africa.

His father, a voodoo high priest, had 8 wives and about 40 children. Family members passed down stories of voodoo that had been told from generation to generation. His bedtime stories were not Bible stories, but ones about voodoo. Parfait was petrified.

As he got older, he trained to one day succeed his father.

Parfait learned how to call down curses on others. But he desperately sought answers for a troubling problem. How could he protect himself from curses called down on him?

One day when Parfait was 13, he was standing outside his home when a childhood friend brought him an envelope with his name on it. The friend said, “A white person came to our school and gave this out and I took one for you. They wrote your name on the envelope.” When Parfait opened it – inside was a book with the title, “Who Is Jesus?”

Through this first book, he learned more about Jesus and began a correspondence course. He would answer questions and send them in and receive other books and resources.

He read about Jesus dying and coming back to life. Reading about that appealed to him because of his fear of death.

As he continued his correspondence course, he read about Jesus raising His friend Lazarus from the dead. If I become Jesus’ friend, Parfait thought, even If I die – He will raise me up.

He continued to work through the Bible study correspondence answering questions. He learned about knowing God personally and was challenged to place his faith in Christ.

“If I make a decision, he thought, what will be the consequences of that?”

His dad beat one of his sisters when she went to church one time. What would happen to him? He feared his whole family would reject him.

After a little more correspondence, one night Parfait knelt on his bed and prayed, “Jesus, I don’t know you enough, but I hear if you enter my life, You will change my life. Come now in my life.”

Parfait didn’t feel any different after his prayer, but he noticed the following day that his fear of death disappeared completely.

He read the 4 gospel books he received daily and grew in finding his meaning and purpose in life of following God. Also, Parfait put his life as a secret Christian behind him.

One day his father asked him to come with him to do a voodoo ceremony. Parfait told him:

“Dad, I respect you, but I can’t help you worship voodoo anymore. I chose Jesus.”

His father let him live in his house, but told him, “Jesus is going to have provide for you.” Parfait had to get a job to support himself. He finished secondary school and also completed a master’s degree. He later became a leader with Cru in Benin.

In 2011, Parfait attended a StoryRunners training in Florida. StoryRunners is a ministry of Cru that trains Christians in oral story telling to help plant churches among unreached people groups that are mostly oral learners through translating and sharing Bible stories.

Confronting His Fear Of Death

In May 2014, Parfait and two others were returning from Ouagadougou, Burkina Faso after a School of Storying training mission trip. They  had left while it was still dark out.  As they traveled, they were singing and praising God for what He has done during their trip.

Suddenly, the early morning was broken with the sound and spray of gunfire from AK-47 rifles. Parfait had slowed down his Toyota 4 Runner to see what he thought were policemen 50 meters in front of him. They turned out to be bandits.

Parfait was shot six times in his left side and started to bleed profusely as the men robbed them of their cell phones and money.

Parfait staggered out of the vehicle and blacked out. When Parfait came to he heard Dodji and Pastor Etienne shouting, “Oh, Jesus save us.” 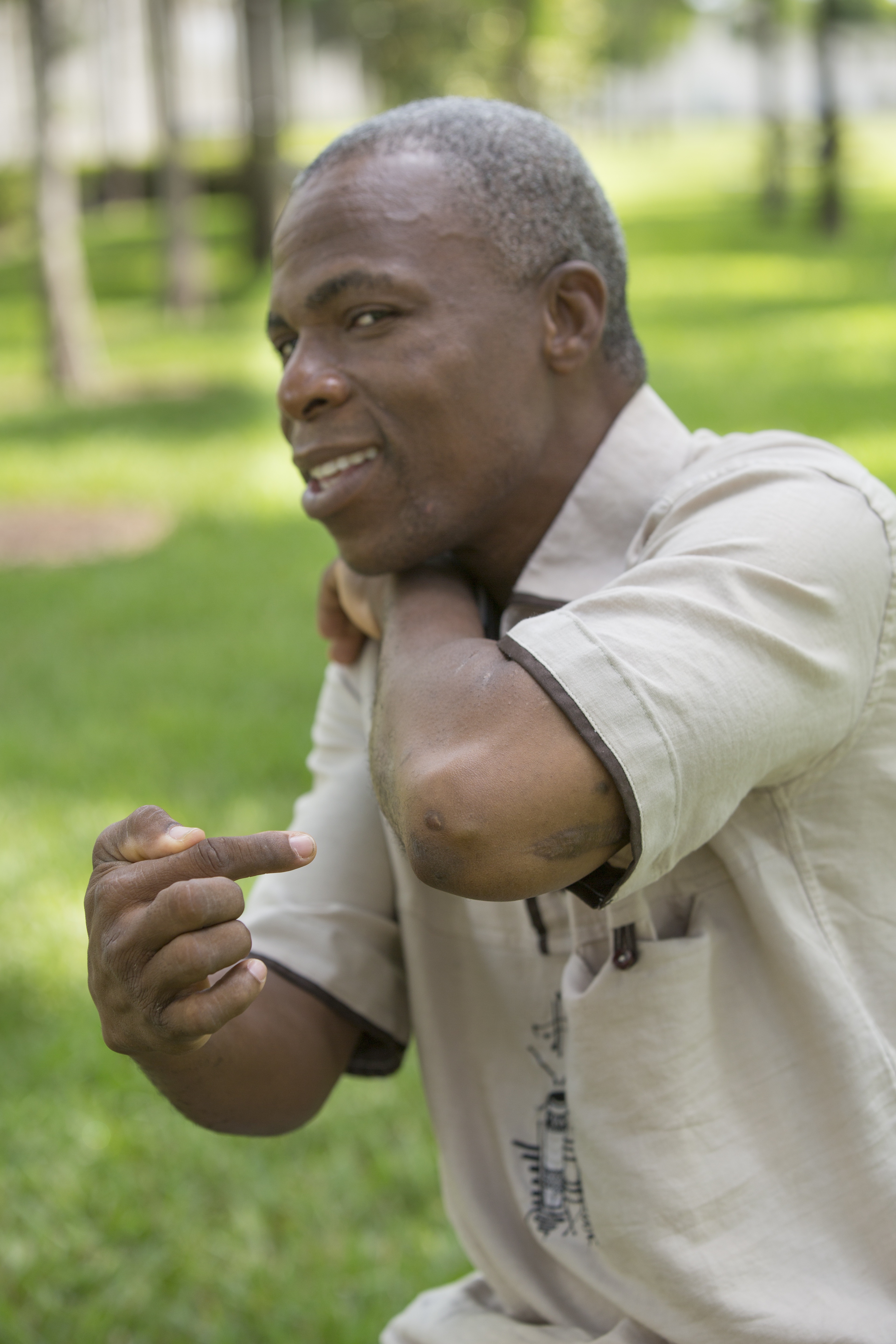 At this moment Parfait said:

Parfait opened his eyes and saw that the robbers had left without taking the vehicle.

Pastor Etienne put clothes over the blood-soaked driver’s seat and drove Parfait first to a clinic, but they couldn’t take care of his gunshot wounds.

An ambulance took him to a big hospital in Ouagadougou. The doctors were surprised that he was still alive when they heard what happened. Despite all the blood he lost, Parfait didn’t need a blood transfusion.

When Parfait went into surgery, the doctors realized that since the bullets didn’t hit any vital organs, they left the bullet in his elbow and the one between his ribs inside him.  But they treated him and sewed up the wounds and released him the next day. “It’s a miracle,” the doctor had said.

Even Parfait’s father saw God’s hand on his son’s life. Twelve years after Parfait placed his faith in Christ, his father said to him, “My son, the way you chose is the best – never abandon it.”

Read more stories of how God has changed lives.