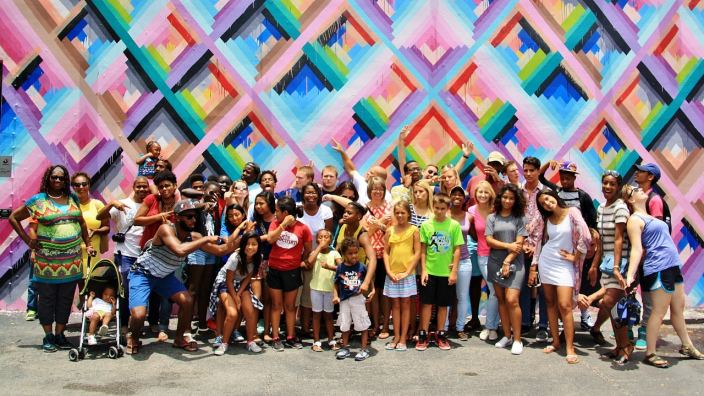 “Often when we think of inner city areas we think ‘dangerous’, ‘bad’, ‘drug infested’, ‘crime ridden’. But when you live in it, you realize it is nothing like the media portrays,” said Jared Dawson.

Jared and his wife, Dominique, have served teens in the inner city with the high school ministry of Cru since 2009. They say their ministry to middle and high schoolers on the southside of Atlanta reaches far beyond the school building into the families and communities of their students.

“Students [in the inner city] are hungry for people who they can trust, who love them, who care about them and who can communicate the gospel in such a relevant way that they can understand it,” Jared said.

Seventy-five percent of people who begin a relationship with Christ choose to do so before they turn 18.

In Atlanta, there are more than 37,000 high school students. Six out of the eight major high schools in the inner city have just three people trying to reach their campus with gospel full time.

So how do you reach these students?

The Dawsons are looking to social media to launch a high school ministry internship program in Atlanta. This internship will provide the help needed in ministry to reach more teenagers, their families and their communities with the gospel.

What is the urban immersion program?

“If you decide to participate in this program, you’ll be impacted for the rest of your life,” Jared said. “You learn to love the inner city and see God’s heart for it. Not only will you grow as a person, but also as a leader.”

The Urban Immersion internship will train young people in doing ministry in an urban context ministry. Those who have a heart for teens in the inner city will be able to shape lives and also will have their lives impacted forever. Cru is praying that similar programs could be launched in the other cities in the coming years so that more students can be reached with the gospel.

“Students today are just so hungry for those they can trust, who care about them, who love them and can communicate the gospel in such a relevant way that they can understand it. But there are just so few who are willing to go,” Jared said.

Learn more about how to get involved with the high school ministry Urban Immersion internship in Atlanta.

See also: Reaching Beyond the Walls of the School

Jared started out as a high school math teacher when the Lord called him to join staff with the high school ministry of Cru. Since taking that step of faith, he and his wife, Dominique, have seen the Lord use their ministry to impact not only the lives of the teenagers they serve, but also those teens families and communities that surround them on the southside of Atlanta.

The Urban Immersion Internship is a 1 to 2 year experience doing urban ministry with the high school ministry of Cru. We launch spiritual movements on high school campuses with a focus on the inner city school system.