A humorous review of internal arguments to NOT talk about Jesus 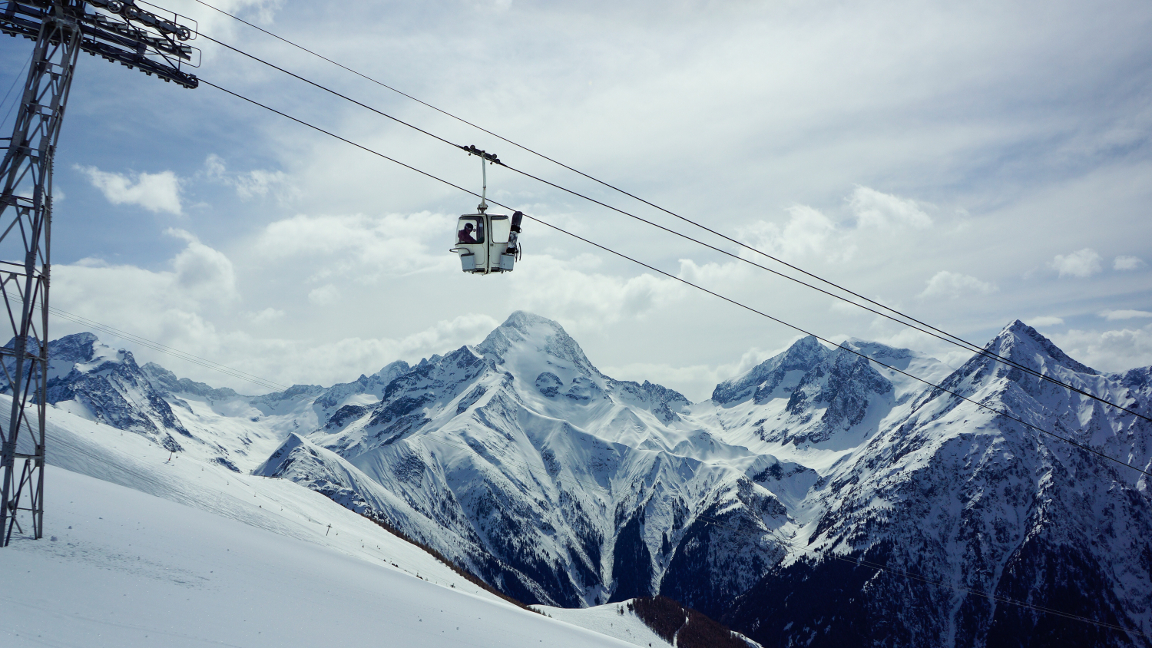 The stranger and I flopped onto the ski-lift chair and started our ascent.

A great opportunity to share the gospel, I thought. No exits on this thing.

"What a great day!" I enthused. "One of the most beautiful I've seen here at Mount Sitzmark in months!"

"I wouldn't know about that," he mumbled.

Trapped Next to a Killer

He stared straight ahead as he answered, squinting his eyes like Clint Eastwood: "Been in jail for the past 10 years. Just got out."

"Manslaughter. But it was temporary insanity. I pushed a complete stranger off a chairlift for no reason. They say I'm fine now."

At this point, all thought of presenting the gospel evaporated. I began casually looking for any exits I might have missed during my first assessment.

After a few moments a broad grin broke across the stranger's face, displaying a gold front tooth.

"I was just kiddin'!" he laughed. He removed his glove and stuck out his hand.

I was thinking, This is probably the same maneuver he used on his last victim. But I shook his hand anyway.

"I'm Chris. Glad to meet you, Rob." But I was still a little rattled.

Should I continue on with my original objective, and try to tell this strange fellow about Christ?

Suddenly, a number of excuses appeared in front of me like lifelines before a drowning man.

I could almost hear a Coast Guard rescuer calling out to me from a lifeboat, "Quick! Grab one!"

The 1st one I snagged was, "I'll blow it! I'll probably say the wrong thing and move him away from the Lord, rather than toward Him!"

I don't know about you, but ever since I became a Christian I've had this little voice in my head that starts to speak up at times like this. Is it

I'm not sure, but he certainly speaks frankly. That's why I call him Frank.

"You can't blow it, Chris," Frank admonished. "Do you think this is your show? God's in control of every aspect here."

Frank chuckled a little in my mind. "I can just see God now, sitting up in heaven, wringing His hands saying, 'Oh, My goodness! Adsit's on the scene! How could I have let that happen? I hope he doesn't -- Oh, no! He isn't going to try to witness to that guy, is he? All is lost!'"

"Aw, Frank. No need to make fun of me. But I haven't been very successful leading people to Christ in the past. Why should it be any different with Rob?"

"The measure of success in witnessing isn't 'Did the person come to Christ?'

The only true measure is 'Did I present the gospel?' If you can answer that question in the affirmative, you're a success!

"Remember what Bill Bright always said? 'Success in witnessing is simply taking the initiative to share Christ in the power of the Holy Spirit, and leaving the results to God.'

I grabbed for another lifeline.

"But look at this guy. He's probably not interested in the things of God. He's just out here looking for a fun day of skiing."

" Oh, you know that for certain, do you? Who died and made you omniscient?

A man or woman without Christ is spiritually starving! Let them get a whiff of the banquet God has for them, and the majority will come to the table."

" Here's a quote for you from Blaise Pascal: 'Within every man is a God-shaped vacuum that can only be filled by Jesus Christ.'

Rob's trying to fill that vacuum with all kinds of non-God-shaped things: skiing, joking, money, fame -- who knows what else? They may satisfy for a while, but it never lasts.

He's still looking, and you've got the Real Deal Meal."

"But Frank, just look at this guy! He seems like a pretty rough customer to me -- maybe even beyond God's reach."

"Ha! Was Saul the Christian-killer beyond God's reach? Was Zaccheus the swindler? Was Nicodemus the Pharisee? Was that thief on the cross? Was..."

"OK, OK, I get your point. No one is without hope: 'Everyone who calls on the name of the Lord will be saved' (Romans 10:13, New International Version)."

"That's right. Besides, you never know who is just sitting on the brink of receiving Christ. People don't usually wear a sign advertising that fact. There's every reason to believe that Rob is ready right now to come to Christ, if he only knew how."

"Then by your good example, kind words and honest communication of the gospel, you will have moved him a little closer to the day when he might finally make that decision.

"I don't know, Frank. I really feel uncomfortable about forcing my views on this guy.

I might offend him -- and he's already been talking about throwing people off chairlifts."

Frank started to sound a little peeved with me.

"Do you intend to force your views on Rob, Chris? Or are you going to simply share a little of your life with him?

"There's a big difference between obnoxious coercion and witnessing. Think of the disciples in Acts 4:20, where they merely spoke about what they saw and heard. If you simply tell Rob what you've seen and heard in a friendly, non-confrontational manner, he's free to listen and ask for more, or he can change the subject.

Don't decide for him what he does or does not want to hear."

Excuse # 5: What If I Can't Answer His Questions

Here comes that Coast Guard guy again: "Grab this one!"

I grabbed: "He might ask me questions that I can't answer and I'll look like a dunce! Wouldn't it be better to leave this for the professionals?"

"Don't worry about what you don't know, just tell him what you do know!

"Remember the blind man that Jesus healed in John 9? He couldn't answer everyone's questions, so he just said, 'One thing I do know. I was blind but now I see!' (NIV).

People will respond to your personal experiences more readily than to your philosophical gymnastics anyway."

"But don't I have to answer all his questions?"

Frank sighed: " You're not getting this, are you? It's not your arguments that are going to persuade anyone to receive Christ. Persuasion is God's job!

"It's nice that you want to help Him out, but He doesn't need help. Romans 1:16 says it's the gospel itself that is the power of God for salvation, not your clever answers or slick approach."

"Frank, are you saying Christianity doesn't have the answers?"

"Do your best to answer his questions, and if you get stumped, tell him you'll find the answer and get back to him.

But ultimately, it's not going to be an intellectual battle won by facts and logic. It's a matter of his will -- and that's the Holy Spirit's territory."

"Can't I just 'let my little light shine'? Then he'll figure it out and come to Christ?"

"Definitely let it shine," Frank responded. " But don't stop there.

"Rob needs to make a decision, and if he doesn't receive the information relevant to that decision, how can he decide?

As it says in Romans 10:14 (Living Bible), 'How can they believe in Him if they have never heard about Him? And how can they hear about Him unless someone tells them?'"

"You see how sensitive you are to his feelings? You're perfect for this job.

With your respectful, caring approach, I really doubt he'll reject you. And besides, people don't really reject you. They may reject your opinion, and they may ultimately reject Christ.

But in fact, they'll probably respect you, since men of conviction are few and far between these days."

This conversation with Frank happened outside of time, in an instant. When we were done, lifelines and the Coast Guard guy were gone. No more excuses.

"Rob," I said after a moment, "I'm just curious. What's your spiritual background?"

But I have to admit, I kept a firm grip on the chairlift.