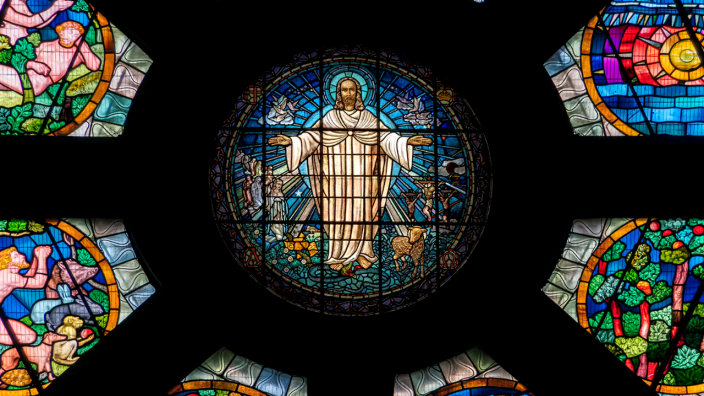 Seeing Christ in All of Scripture

It’s appropriate that at the end of Luke’s Gospel (Chapter 24), Luke recounts the interaction Jesus had with a couple of His disciples walking along the road to Emmaus.

Jesus — the Messiah — has been crucified, and the disciples are perplexed, unable to piece it all together. How did the Savior just die? But along comes Jesus, disguised as He has been throughout Scripture, and He opens their eyes to see that the whole of Scripture is really about Him:

He said to them, “How foolish you are, and how slow of heart to believe all that the prophets have spoken! Did not the Christ have to suffer these things and then enter His glory?” And beginning with Moses and all the Prophets, He explained to them what was said in all the Scriptures concerning Himself. (Luke 24:25-27, New International Version)

Luke recounts that their “hearts burned within them” (v. 32) as their minds were opened.

Luke reveals to us an important fact: Knowing God’s plan and gift of salvation is deeply rooted in knowing the entire story. The good news doesn’t just reside in Part 2 of the Bible, the New Testament. The entire story of the Bible is about one person, one plan, one goal. That person is Jesus, that plan is redemption, the goal is the glory of God. It’s really a pretty simple storyline.

When we read Scripture, we need to look to see how the text relates or points forward to Christ. In the book “The Ancient Love Song,” Charles Drew (P&R Publishing) notes some of the ways Scripture points us to Christ.

The Law (especially portions of Exodus, Leviticus, Numbers and Deuteronomy) anticipates Christ by exposing our hearts and persuading us of our dire need for a Savior.

At a broader level, the failures of specific Old Testament characters (for example, the repeated failures of God’s people to trust Him and follow His law) also point indirectly to our need for a Savior.

The promises scattered throughout the Old Testament (especially prophetic books such as Isaiah, Jeremiah and Ezekiel) anticipate Christ by creating a longing in several areas of life that only Jesus can ultimately fulfill.

Wisdom literature (Job, Proverbs, Ecclesiastes and so on) compels us to look to Christ for meaning and for the ability to live wisely (see Colossians 2:3).

The psalmists and prophets sometimes spoke with the voice of Christ, anticipating His suffering (the Cross) and exaltation (the Resurrection).

Certain Old Testament rituals, such as the Passover (Exodus 12), foreshadow God’s redemption of His people through the Cross.

In the New Testament, we encounter the explicit proclamation of Jesus:

The Gospels (Matthew, Mark, Luke, and John) introduce us to Jesus Christ and His ministry on earth, culminating in His death, burial and resurrection.

The Epistles (Romans, 1 Corinthians and so on) offer sustained theological reflection on the significance of the person and work of Christ for the church.

Revelation gives us a window into the future glory of Christ as He brings in His heavenly kingdom.

The Bible is an eclectic book. It’s filled with books about history, poems, wisdom, songs, prophecy and in-depth narratives. If you read them only in part, you could miss out on a lot of what God wants to teach you. If you camp out only in your favorite parts, you’ll miss the fullness of the story.

The point of such a diverse group of perspectives and genres is to engage with a God who is not normal. Nor is He routine. Nor is He interested in simply giving us a list of rules and regulations to follow without passion or desire.

He desires to engage with you, to relate with you and to walk with you. So, approach the Bible eager to see what God is like. And knowing that God is exactly like Jesus, perhaps you can begin to look at the Bible with fresh eyes. When you understand that God has been pointing to Jesus from the very beginning, your study of the Bible becomes a whole new adventure.

Overview of the Bible