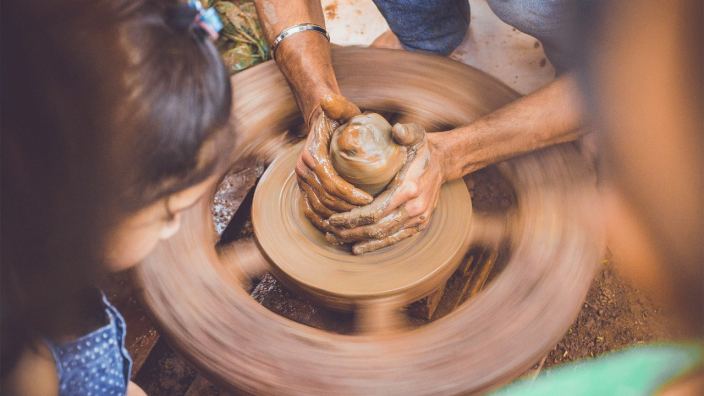 Safe in the Hands of the Potter

Have you ever made something out of clay? How about slime or Play-Doh? Doesn’t it feel great to hold something moldable in your hands? You can sculpt it into whatever you want it to be.

God knows what shape He wants your life to take. The result He has in mind is that you’ll “have the same form as the image of His Son” (Romans 8:29, God’s Word Translation). As you grow and mature in your faith, you’ll start to think and act more and more like Jesus.

You may think this is impossible. You may think, How can you fix everything that needs to change? The truth is you can’t. You’re like clay, remember?

Our Source of Courage

Jacob, whose life is documented in the book of Genesis, knew God had big plans for him. But he didn’t know how to let God be the potter. He thought God needed his help every step of the way.

Jacob’s life was characterized by the many ways he relied on his cleverness to get what he wanted. He tricked his brother, Esau, out of his inheritance, and he tricked his father, Isaac, into giving him Esau’s blessing. Isaac was upset with Jacob, and Esau was so mad that he wanted to kill his brother.

Jacob fled to his uncle, Laban, and spent 20 years working for him. But eventually, it was time to go home.

The Shape of Change

Jacob feared that Esau would try to kill him if he returned. He came up with yet another scheme to win back his brother’s . But the night before the meeting, God showed up in the form of a man and wrestled all night with Jacob.

By morning, Jacob was at the end of his strength, but he wouldn’t let go of God. God touched his thigh and put it out of joint, which gave Jacob a limp. God also pronounced a blessing upon him. That wrestling match changed the shape of Jacob’s life. Through this physical struggle, he learned a spiritual lesson: to stop relying on himself and to start relying on God. God marked the day by changing Jacob’s name to Israel, which means “God-governed.”

In God’s hands, you can become what He has in mind for you. The key is staying pliable. We do that by trusting Him and obeying His Word. This gives us the courage we need to face our issues. We don’t face them alone.

Is God’s Love What You Need to Change Your Life?

What Are the Defining Moments in Your Life?

Latest Stories in Beginning With God

What Are the Defining Moments in Your Life?

Do you feel like your next step is impossible? Discover how even Jesus wrestled with the difficulty of His defining moment.

Is God’s Love What You Need to Change Your Life?

What does it mean when people say God changed their lives? Is God’s love really that powerful?

How to Change Your Life: Motivation, Courage and Love

Change requires risk, which means it also requires courage. It takes motivation to overcome obstacles along the way. Sometimes those obstacles are too much for us to face on our own, but true love can help us find the courage we need to change.