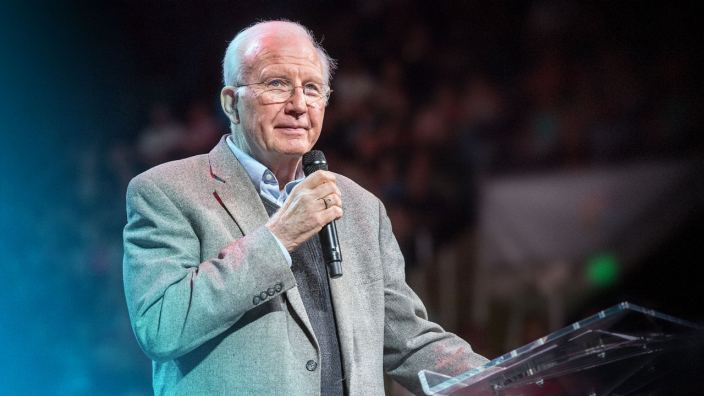 “It has been a joy for me to serve the team of godly, gifted leaders God has raised up in our ministry. They are extremely capable of leading us into the future.”
– Steve Douglass

» Read a letter from Steve Douglass on this transition.

After leading one of the world’s largest Christian ministries for 19 years, Steve Douglass announced today plans to step down from his role as president of Cru/Campus Crusade for Christ International.

“I have regularly prayed about how long I should serve as president. Over several months, the Lord led me to see that now is the time I should step aside. That leading was enough, but he did show me some realities to confirm what I was hearing. Among them are a series of health issues that have reduced my availability, energy and focus,” said the 74-year-old Douglass. “Cru will need a strong president to guide us through the potentially challenging times of the next few years. That only accentuates the need to make a wise, orderly selection and transition during the next several months.”

After discussing and praying about this with Douglass, Cru’s board of directors has initiated a succession process, which is expected to be completed by the fall. He will remain active in his role until that time.

“Steve was uniquely called by God to succeed one of the great evangelical leaders of the 20th century,” said Barry Cannada, chairman of Cru’s board of directors. “His many years at the helm have been characterized by integrity, wisdom and humility. We are grateful that Steve has finished this phase of ministry well, and we look forward to his continued influence on Cru and the global church.”

Douglass’ start at Cru was a bit unusual. A Massachusetts Institute of Technology undergraduate, he joined Cru in 1969 right after finishing Harvard Business School.

“I imagined a few of my Harvard professors were thinking, ‘Where did we go wrong? Does this man not realize he is about to graduate from one of the high temples of capitalism?’ However, as I look back upon the past 51 years, I can’t imagine a better way to have utilized what I learned there,” said Douglass.

In his early years at the organization, Douglass served in a variety of roles — most often working side-by-side with the ministry’s founder, Bill Bright. When he stepped into the role of president in 2001, he committed that he would seek to keep the movement true to its calling to help fulfill the Great Commission. He also said he would promote flexibility and innovation regarding strategy.

During Douglass’ time as president, God used strong global leaders to enable the ministry to accelerate toward its goal to help connect people everywhere to Jesus Christ. Today more than 19,000 staff members minister in over 190 countries. Cru has a presence on more than 8,000 campuses worldwide, while reaching beyond students to a variety of audiences and across cultures. One widely used resource, The Jesus Film, has generated 1 billion exposures to the gospel and has seen 100 million indicated decisions for Christ in the last four years.

Douglass has emphasized maximizing partnership with others to tell people everywhere about God’s hope and purpose for each of our lives.

“I have been especially grateful for the privilege Cru has had to work together with so many ministries, denominations and local churches,” said Douglass, who plans to remain on staff with Cru and focus on cooperative initiatives. “I stand ready to help the new leader succeed, and to play an ongoing role in helping us and other ministries collaborate.”

Throughout his career, Douglass’ wife, Judy, has been a strong partner in ministry. An author of multiple books and a global ministry speaker, Judy was the founding editor of Worldwide Challenge magazine. She currently leads an initiative providing ministry resources to women around the world. In recent years she established Prayer for Prodigals, an online community for those who love someone who is making destructive choices. Judy also plans to remain on staff with Cru, continuing to write, speak and support women in ministry.

The board of directors requests prayer as they work to identify the next president for the organization.