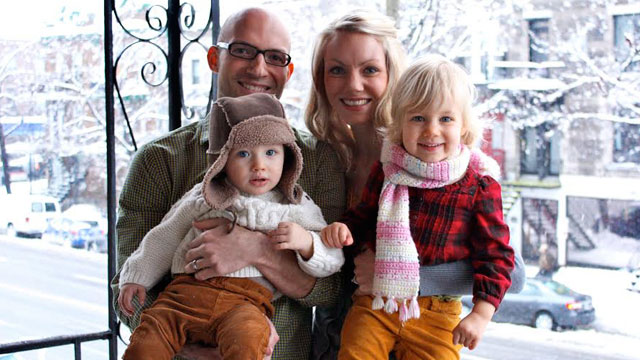 Brad Morrice is a former Cru staff member who has chosen to plant a church in Quebec, one of Canada’s atheist strongholds, with a vision to bring Jesus back to the province, one neighborhood at a time.

Le Plateau-Mont-Royal is an influential Montreal neighborhood of 100,000 people, home to artists, thinkers, and other cultural influencers. Brad and his wife Emily currently lead the only French-speaking evangelical church in the neighborhood.

Brad previously served as a staff member with Cru in Montreal. “I joined Cru to do ministry amongst unreached Québecois people,” says Brad, who became fluent in French after moving to Quebec to begin his ministry. “The need in Québec was so great and that really drew me.”

Eglise du Plateau Mont-Royal is the church Brad and his wife Emily started in their living room. Using their previous experience in campus ministry, they are building a community of people who love their neighborhood, and want to explore following Jesus together.

Rather than members seeing evangelism as something mystical and strange, I tell people it’s as simple as knocking on your neighbor’s door and inviting them for a barbeque.

David is a student Brad mentors who brought his friend Roxan to a weekly Bible-study group. He sensed Roxan, initially very suspicious of religion, was looking for answers. As the pieces of the gospel started to make sense, she found herself already becoming part of a Christian community. She saw lived out what David had been telling her. After 6 months, she decided to follow Christ.

Brad recently got to baptize Roxan.

“If you’re not an evangelist I wouldn't advise becoming a church planter,” says Brad. “We’ve been able to establish a church where the members all view themselves as evangelists,” says Brad.

Few North American churches would make such a bold claim, but Brad believes that by not having a Sunday church service right from the start, those who just wanted to be consumers weren’t attracted to their community.

So everyone in the church is expected to join something in the neighborhood, like a yoga class, sports team, or film group. Christians intentionally becoming part of the fabric of a community are changing its atmosphere day by day.

Brad encourages members to live locally because he wants to recover the idea of a local church, rather than people commuting to whatever church best meets their individual needs.

The vision is spreading throughout this burgeoning community. “We have people letting go of their apartments to rent apartments in this neighborhood, even selling their homes and down-sizing to come here.”

Brad believes living locally is a vital ingredient in evangelism. “Rather than members seeing evangelism as something mystical and strange, I tell people it’s as simple as knocking on your neighbor’s door and inviting them for a barbeque.”

“The building, the band, the programs…those will come later. For now it’s all about reaching the neighborhood,” says Brad. Le Plateau is opening up to Jesus, one David, and one Roxan at a time.

Learn more about reaching your neighborhood.