Eduardo and Diana’s relationship was saved after an encounter with Christ. 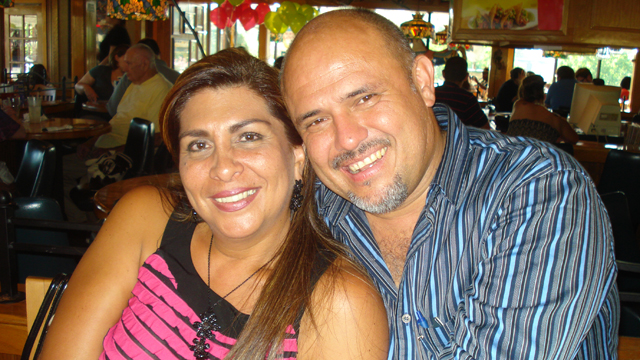 When Diana and Eduardo Rivadeneira decided to get married, they had no idea how tumultuous their relationship would become or that divorce could appear so enticing.

Diana and Eduardo were both born in Ecuador into large families with religious mothers who aimed to be a good Christian influence. Yet, their fathers were distant – Eduardo’s was an alcoholic and sexually promiscuous.

Although Diana’s childhood was normal, Eduardo’s was difficult and filled with pain, due to his father’s drunkenness, fights and infidelity. “I took refuge in sports, training every day,” says Eduardo.

Diana and Eduardo met as teenagers. “With highs and lows we were in love for 8 years,” says Diana. “During all those years I had turned away from God. I knew of Him, but did not know him.”

They got married at 23, in Eduardo’s final year at University. Eduardo was a popular guy in sports and one of the strongest drinkers in the entire student body.

“We started our marriage with many errors and problems, but the main problem was we had removed God from our private lives,” says Eduardo. Diana was trying to change it day in and day out but she didn’t know how.

Not even one year after marriage, their first child was born. “I know today that children are a blessing,” says Diana, “but back then, this baby brought a big turnaround in my life because I decided to be a mother rather than wife.”

After their second and third children, Diana was lonely and feeling the lack of love in her marriage. “We lived in complete isolation,” Diana explains. “We gave insults and our arguments eventually came to blows. This happened almost every day. It was the way we resolved problems, we wanted to see which one of us would win.”

Eduardo became an expert at lying and deceiving. “I was proud and I believed I was so much better than my father,” he says. “I started experimenting with drugs when I discovered that when I mixed them with alcohol, it was like discovering the glory of escape. I was going to parties, went on drinking binges and hung around with dangerous friends.”

“I felt a great emptiness inside,” he says, “but the mask I was wearing made it seem that all was right with the world. In reality, I broke things in our home and I broke our family. My children were afraid; they would hide under the bed and cry whenever I broke something.”

During this time, Diana had thrown him out of the house on two occasions.

Everything was complicated and their situation reached a breaking point when they had been married for 10 years. “I felt depressed, abused, deceived,” says Diana. “The question that permeated my mind was, Why me, what have I done to deserve this? I wanted a divorce.”

Diana began looking for answers in divination cards, smoking and other things her friends recommended. She never found answers.

During these troubled years, Diana’s mother never stopped praying or asking her to seek God.

“I felt dead in life until the day came that I decided to look up and go down on my knees,” she says. Diana prayed with a broken heart, asking God to show her He is real, like her mother had told her. “I cried out, ‘God you can take me, and take over for me!’”

“From that day my life began to change,” she says. “I had peace that surpassed all understanding, I began to interact with God through a devotional time. While the problems were still around me, I was not the same and no longer faced the problems as before.”

Meanwhile, Eduardo visited a sorcerer from Venezuela, a doctor of hypnosis, two psychologists and shamans. Nothing worked.

But one day when Eduardo tried to argue with Diana, he found that she was different and did not fight. “She said the fight was not with her, the fight was with God,” he says. “Now I thought that she had gone crazy!”

“My children did not want to spend time with me,” he recalls. “That night when I went to sleep I told God that I have made my own heart hurt because of my actions and I cannot stand this life anymore.”

During this time, God provided an opportunity when the couple was invited to a small group study and a marriage seminar. “This is when God used Leon and Miriam Motta and FamilyLife to change our lives,” says Diana.

One day, Eduardo went home and his son did not hug him. “I realized all that I need to restore in my broken family. The Motta’s are our mentors and the instruments that God used to save our marriage.”

Both Eduardo and Diana made the decision to accept Christ as their personal Lord and Savior.

“We made a covenant with God: For the rest of our lives, we will instruct and guide our entire family, we will work to rebuild and construct our marriage to God,” Eduardo says. “My friends tell me I may seem a little crazy, but now I will live for the things of God,” he says.

The Rivadeneira’s are now citizens of the United States and have been trained as FamilyLife speakers. They have presented Weekend to Remember conferences in Ecuador and are key volunteer leaders on the Miami FamilyLife team. They have helped equip many couples to start family ministry teams in their churches and communities.