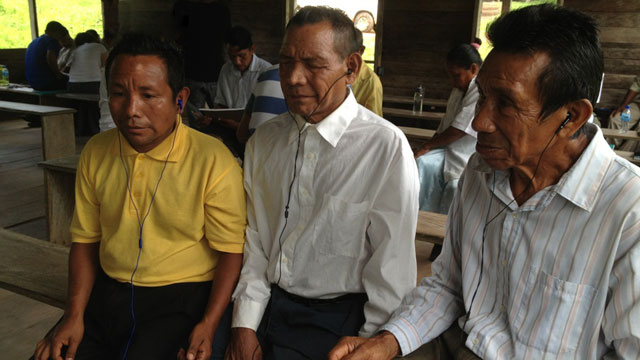 They have no Bible in their language. The Warau tribe in Guyana, South America has learned everything they know about God in English. Those who don’t know English are left out.

The name of the Lord has never been spoken or praised in their heart language of Warau.

He speaks to his family and friends in Warau, but until a few months ago, he always preached and prayed in English.

The blind pastor’s storying training was led by Elizabeth, a young missionary on staff with Frontline Missions.

Earlier this year, Elizabeth learned StoryRunners’ (a ministry of Cru) 5-week format of developing 42 Bible stories into an unreached language and recording them so they can be used to share the message of God’s love and forgiveness within that people group.

Excited to see how “God speaking Warau” was affecting her trainees, Elizabeth wrote after just one week: “The highlight of the week for me was when I saw the pride on the Warau trainees’ faces as they sang in their own language. They only know a few songs in Warau, so they were excited when we asked them to create songs from the Bible stories they learned. Now they have 6 more! I believe God smiles when we praise Him in our own language and culture.”

At the conclusion of the SOS, there was much to celebrate. “The Warau now have 42 Bible stories in their heart language,” Elizabeth reported enthusiastically. “They are now prepared to share the Truth with other members of their tribe!”

The final week of the SOS was spent preparing the trainees in using the Bible stories among their people group. They were instructed to pray, asking God to reveal to them how He wants them to use the stories.

Elizabeth explained, “We asked them to draw a picture of the vision that God gave them. One mother shared of her dream to teach her children Warau and preserve her language by using the Bible stories. Several told of their desire to go up the river to the ‘pure Warau’ (the people who speak only Warau). The last week was not the end, but the beginning of how God wants to use Warau people to reach other Warau people with God’s Story.”

A multi-purpose technician meets Christ during her lunch break at Georgetown Hospital in Guyana.

For children in Guyana, an after school program exposed them to all kinds of new things.