Students in England use a provocative public event as a catalyst to launch a movement. 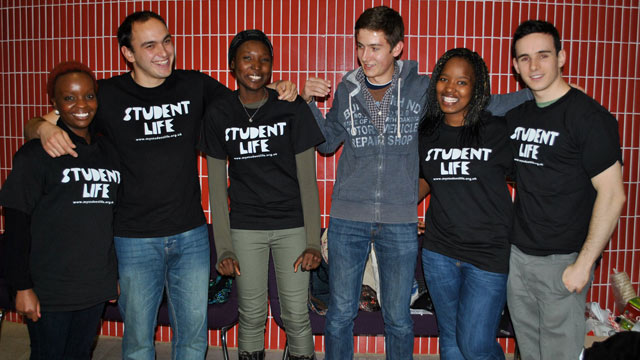 Obatare Uwegba was a second year student at Anglia Ruskin. She had grown up going to church but had yet to take Jesus seriously in her own life. She saw the poster and had no idea the event was being organized by a group of Christians, but she knew she had to be there.

Former-pornographic film star Teresa Carey spent most of her adult life appearing in x-rated films until she became a Christian. Now she was in unchartered territory having never spoken publicly at an event like this. She was standing in front of 140 students about to tell the story of how Jesus had radically changed her life.

Obatare remembers, “There was a buzz on campus that you never normally see around events with speakers. I arrived and the room was packed out but the atmosphere wasn’t intimidating. I really didn’t know what I was walking in to.”

Cru staff member Andy Atkins and 6 students had been pioneering a new movement at the university for 6 weeks. Carwyn Willis, one of the students leaders says, “I think Andy wanted to tell the whole campus that our group had arrived.”

They had prayed for 30-40 students to attend their first event and ended up having to turn people away due to the size of the room.

Teresa described her story then answered questions for 30 minutes. “The whole room was silent when she was speaking; her story was really touching. I couldn’t believe what she had been through and I thought, how can someone like this be touched by God?” says Obatare.

“You could ask Teresa anything,” says Andy, “and people did. People asked her questions about the films she had appeared in. But the interesting thing was how they much they wanted to know about her relationship with God, how she knew that was real, how her life had changed.”

Obatare remembers wondering how Teresa would be dressed that day, and being surprised by how normal and approachable she was. She was also struck by the fact that Teresa didn’t immediately end her career after a dramatic encounter with Jesus. “Her story made me feel that Christianity was more human, that you didn’t have to be superhuman because life change was a gradual process.”

Obatare left the room that day saying to herself, “I have to get involved in this.” She began meeting with Andy and other students to explore the Bible, and within weeks began to understand her Christian faith for the first time. She now acts as host for the public events and recently welcomed Teresa back to help launch year 2 for the movement.

Teresa has now spoken at 3 other universities in the UK where Cru is building movements.

Andy believes this event helped launch their movement, as students and faculty all over campus took notice of what the group was doing. Their events average 100 students in attendance and 70% of those involved right now are not yet Christians.

“We saw 7 students come to faith last year as a result of these events, “says Andy. “If God is doing this big stuff it helps our students know they need to get trained up and ready to deal with all the students with questions.”

Two brothers learn about Jesus over the internet.

From Korea to London

Despite language barriers, it is Seung Ho’s commitment to serve God and make Him known to others that first brought him to London, England’s capital city, and it’s that same commitment that makes the Korean stay.

From an American military base in England, Jim and Bea Fishback work with Cru to help fight for military families and marriages.