Faith at a Theme Park?

A South African strengthens his faith during his college internship. 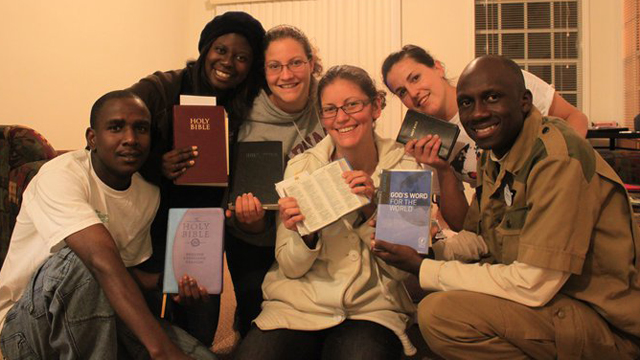 Thabiso, on far left, with some of the other interns during Bible study. Photo courtesy Thabiso Mahlangu.

Thabiso Mahlangu flew from South Africa to Florida for a 12-month college program at an Orlando theme park. 2 months into his program, he met Kevin Dennis, a Cru staff member who leads a ministry for students working at the theme parks.

“Kevin shard the vision of Cru and I was interested to be discipled by him,” Thabiso remembers. “He became a friend, a brother and a true mentor to me. He helped me to focus on God and exercise a high level of self-control in the middle of challenges and difficulties.

“Every time we met, Kevin would say to me, ‘Thabiso, I am investing into your life so you can go and do the same to others.’ He took me to evangelize and did some of his follow up meetings with me,” Thabiso says. “And my compassion to win the world for the kingdom of God started to develop.

“Our vision was to win our fellow college program students to have a relationship with Jesus Christ,” he explains. “We were shocked to learn that there are so many young people who have never heard about Jesus, let alone have ever touched the Bible. This situation called for an emergency and we took the initiative to share the gospel with our fellow interns.”

The group of interns Thabiso was working with all lived in the same apartment complex. When Kevin encouraged him to start a Bible study group at the apartments, Thabiso helped name the group Holy Tuesdays.

During that year, Thabiso saw young people from all over the world (Canada, China, Japan, Germany, Australia, New Zealand, Panama, Peru, Costa Rica) come to know the Lord via Holy Tuesdays under the mentorship of Kevin and other members from his Cru team. “We were humbled to be used by God,” Thabiso says. “Holy Tuesday was a blessing and continued to change lives.”

One month before his program ended, Thabiso was convinced God had called him to become a missionary. “I started to ask questions on how could join the mission,” Thabiso recalls, “and that’s when Kevin told me that there is Cru in South Africa.”

When Thabiso got on a plane to return to South Africa, he knew he was going to join Cru in his home country.

“Now here in South Africa, I share the gospel with students at Wits University,” he says. He and his team desire to form a movement of God-fearing young people. “I see the signs of a radical movement, our disciples are excited and some are already bold enough to share the gospel on their own.

“A relationship with God through Jesus Christ is the best gift I have ever received,” Thabiso says. “This is a gift I would like to pass to our students so they could become responsible young men and women of tomorrow and continue to win the world for Christ.”

Thabiso is currently an intern with Cru South Africa. He is hoping to finish raising all the funds he needs very soon so he can join full time staff with CCCSA.

Loving the Least Lovable by Faith

South African School Teacher Fights AIDS: "I Must Do Something."

Loving the Least Lovable by Faith

Who do you find hard to love? Marie was surprised by her answer: taxi drivers. Living in South Africa, her prejudice seemed ordinary, but God transformed her heart and allowed her to love taxi drivers by faith. What could this look like in your life?

Burned out teacher's motivation is restored through abstinence-based teaching program in South Africa.

South African School Teacher Fights AIDS: "I Must Do Something."

Weary of watching her people die, a South African schoolteacher joins the fight against HIV/AIDS.