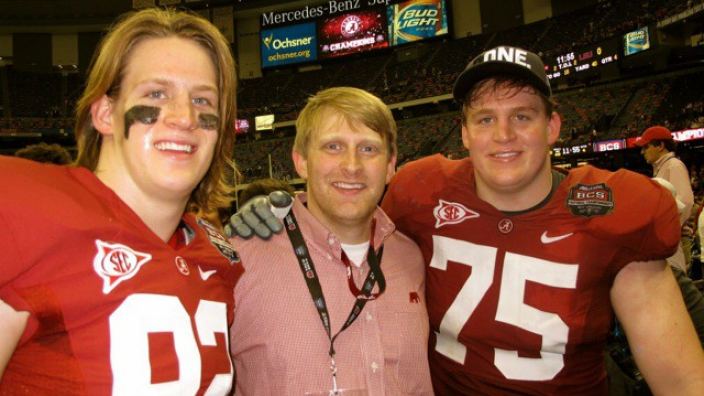 Barrett Jones applies lessons from Alabama during his first year with the Rams.

Trading in his crimson and white college colors for millennium blue and new century gold, Barrett Jones tackles his first season as offensive guard for the St. Louis Rams.

It’s a season of transition for the NFL rookie.

Barrett no longer surrounds himself with southern accents and the tune of “Sweet Home Alabama,” but instead with a thriving metropolitan area known as the Gateway City. Halftime locker room conversations from Alabama coach Nick Saban are replaced with words from Rams coach Jeff Fisher.

The one thing that remains the same in Barrett’s life: his faith.

“College was a time I really grew in my faith,” Barrett says. “I remember the first time I went to Cru was my freshman year after an invite from a friend. I really liked the message and met a lot of nice people.”

As Barrett became more involved with Cru, he expressed an interest to join the leadership team.

“It was encouraging to have fellowship with strong believers and to have those responsibilities as a leader,” Barrett says. “One thing Cru encouraged me to do was to actively seek to invite people to Cru and start mentoring them on my own and having the courage to do so.”

Specifically, Barrett sought after one person in particular, whom he regularly brought to Cru. Barrett saw his faith strengthen during a difficult time with his family, and saw how God’s words were able to comfort him.

“Christians really need that solid foundation so we’ll be able to stand when things get hard,” Barrett says. “Cru taught me how important it is to have like-minded people around you to point out your blind spots. I don’t think we’re called to hang out with only believers, but it certainly is important so that you can be strengthened and be able to witness to non-believers.”

Barrett says not everyone on his college team was like-minded and continues to see that in the NFL.

“It’s still always going to be difficult, especially being a rookie in the NFL, in sharing my faith with my teammates,” Barrett says. “I’ve had some great conversations with some guys about what I believe.”

Barrett says these past few months have been tough for him not having his friends from Cru close-by, but he says he still keeps a close relationship with them, including Jeff Norris, Cru campus director at Bama Cru.

“One of my goals as I mentor people is that it would eventually transition from strictly a mentor relationship to just simply a great friendship centered on Christ,” Jeff says. “That's mainly what Barrett is now, a great friend.”

Barrett says as he got to know Jeff better in college, they would meet together for weekly discipleship.

“I love Jeff,” Barrett says. “He really started to pour into my life and hold me accountable in a lot of areas. People can really see that God has given him a gift. He is a role model for what a Christian father and husband should look like. He helped me grow in my faith so much and I’m so grateful for that.”

As Barrett started to speak more around the community, Jeff helped him develop talks and sermons, as well as how to share the gospel effectively.

“I remember the first few times I gave talks, I was just so nervous about sharing my faith,” Barrett says. “One thing he told me that I’ll never forget was, ‘When you leave the stage you want people saying, “Man, how awesome is God” Not “how awesome is Barrett.”’ I want the focus to be on how great God is and how great the work He’s done in my life, not how great I am.”

Barrett says being a vocal Christian is something he’s always wanted to do and feels Cru has equipped him with the boldness, confidence and knowledge to share his faith in his new transition in life.

“He was faithful to proclaim that message while at Alabama, and now he's doing the same in St. Louis,” Jeff says.

“God has really been teaching me to rely on him and not be comfortable in my faith,” Barrett says. “God has raised me up for a reason, and that is so I can glorify him.”

Pre-cancer: Susie’s journey of doubt before a brain tumor