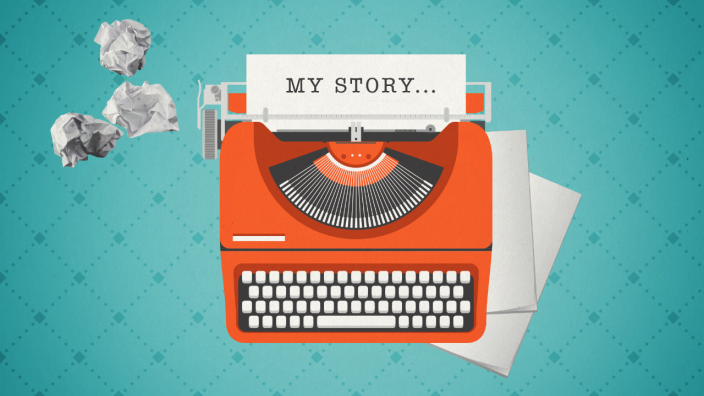 My head snapped up, startled, toward the voice at the end of a table filled with friends.

All eyes turned to me. I scrambled to compile something coherent, but even as I opened my mouth, I knew I hadn’t. What is my story?

I hear it regularly – Who are you? How’d you get here? What’s your story?

For a long time, I wasn’t sure what my story was. I grew up in a Christian family and prayed to receive Christ when I was five years old. There was no dramatic conversion experience accompanied by immediate life change like some of the stories I’d heard.

My life before Christ featured me in diapers. My life after Christ was… everything else. Was that good enough?

But in the last two years, I’ve begun sifting through my story – the parts I tried to avoid thinking about and never connected to my testimony.

I was challenged to consider a new idea. Maybe my story is about more than the moment I accepted Christ. What if I could explain how the gospel connects to different pieces of my story, long after the moment of conversion?

The beginning of the story

Like I said, I was five years old when I prayed to receive Christ. I barely remember anything before that.

But from around age five to ten, I was sexually abused.

Though I knew I’d accepted Jesus and would spend eternity in heaven, what I experienced as a child instilled deep questions about God in me.

Yes, He had the power to give me eternal life, but could He protect me? Was He good? Was He even paying attention?

On the outside, I looked normal. But on the inside, I struggled. I felt safest when I was in control of my life, learning to regulate what emotions I allowed others to see. Internally, I used anger to insulate myself from feeling pain.

Ultimately, these methods of coping began letting me down. When situations arose that were outside my control, I felt abandoned. I was often anxious and afraid, and I felt angry with God for the things He allowed to happen. I attributed my abuse to His negligence. Surely if He’d cared, He wouldn’t have allowed it to happen. In my mind, the best-case scenario cast Him as indifferent to my pain, and the worst-case scenario showed Him to be the cause.

My response to either scenario was an emotional wall of anger and an unwillingness to open my heart to God. If I were vulnerable, couldn’t He crush me again?

A time for change

I hid what was going on internally for as long as I could – but eventually the truth got out. It always does.

I realized that I couldn’t fix myself. There were places inside me that were fundamentally broken, views of God I held that were deeply flawed, and too complex to repair on my own.

Through a mentor, God provided a safe place for me to share my story. She challenged me to consider letting God into my pain, and I began attending a recovery group for survivors of sexual abuse.

Day by day, it didn’t seem like much was changing. I cried a lot. I made many connections between the abuse I experienced in the past and its effects on the present. But one thing did change: instead of ignoring the anger I felt toward God as I had done for years, I began acknowledging it.

I decided that if God couldn’t handle what I honestly thought about Him and His ability to care for me, I couldn’t follow Him. And some deeply buried part of me hoped if He could handle it, then He could also change the way I saw Him.

As I took baby steps forward in being honest with God, I discovered something I didn’t expect – His presence.

As I started pushing down the walls I’d built up around my heart and let the anger seep out, there was room for Him to come in and comfort me.

God wasn’t surprised that I was angry with Him over the painful parts of my story. He knew. He knew all of who I was, and He loved me anyway.

The only one surprised was me.

In it for the long haul

As it turns out, completely surrendering my life to God is an area I still wrestle. It’s a constant exercise – getting off the throne of my life and letting God sit there instead.

I’m still learning to trust God, to invite Him in when I’m experiencing fear and pain. I might surrender my life to Him one minute, and then snatch it back the next when circumstances feel unsettling.

But as my trust in God grows, I experience more joy and less fear. I know that I’m loved and safe with Jesus. I still struggle, but now, I’m honest about it with God. He’s proven that He can handle me at my worst. He wants to hear what’s going on inside of me, even if it’s ugly.

Today, I help lead the recovery group that God used to begin healing me. I’ve learned that only by allowing God access to my story and pain can it be redeemed. As I continue to surrender this piece of my story to Him, He’s able to create something beautiful out of it.

Your story is good enough

In many ways, our own stories are the most powerful tool we have to share the gospel. They feature redemption in its simplest form, delivered in a package that can’t be reasoned away with intellectual arguments and scientific facts.

This is who I was.

This is who I am now.

Instead of frightening people away, telling my story usually opens doors for further spiritual conversation. Others feel free to express that maybe they doubt God’s goodness and love for them, too. Maybe they’re angry with Him. Maybe they’ve experienced some type of abuse and have never let God in on it.

Your story can break down walls in the people who hear it, giving them permission to speak. Are you willing to let them see Jesus through you?

Action Point: When we put words to the hard parts of our stories, we can give those around us a new picture of who Jesus is. Who does your story show Him to be? What would happen if you were willing to share your story with others?

Read about others who discovered their hope was misplaced and how they found a hope that lasts.