Taking a Stand in Switzerland 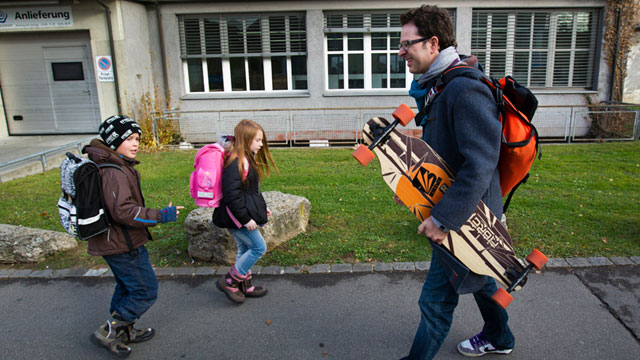 Near the foothills of the Alps, seven teens screech and giggle as they swing and push one another on playground equipment. Walking up to greet them, Mike Zurbrügg jokingly comments, “Oh, those toys are really for little kids.”

He pauses, then jogs in his purple-and-white skateboarding shoes over to where they are playing. Nudging between two youth, Mike propels one teen higher on the disc swing, causing everyone to break into laughter. This group could easily be a typical gathering of Swiss high-school students.

But it’s what they do next that makes them different.

Running inside for their weekly lunch meeting, the group leader, Tasheena, begins playing the keyboard. The youth open small paperback books and begin singing worship tunes in their Swiss-German tongue.

This group is one of 30 that Mike works with on a regular basis. He spends his days in the office, skateboarding to and from train stations and meeting with groups of youth, some more than 25 miles away.

As a staff member with Campus für Christus Schweiz (Cru in Switzerland), Mike works specifically with youth in a ministry called Schülertreff (“student meeting”) that he began more than a decade ago in Zürich. Now there are 70 groups with more than 400 youth involved. His mission is to equip Swiss youth to introduce Jesus to their friends by creating opportunities for evangelism.

This particular group meets in Mike’s village, Otelfingen, where he lives with his wife, Priska, and their three children: Dominic, 15, Samuel, 12, and Anna, 10. The group was formed when Dominic decided he wanted to meet with his Christian friends and begin praying for their school and peers.

Mike was elated to have his son desire this on his own, with no prompting from his dad. “Switzerland doesn’t have a Christian culture,” Mike says. “It takes a lot of guts for these students to want to start a group or reach out to their friends.”

“In my old class,” says Dominic, “there was one Christian; now there are eight.”

Though forgetful and at times unorganized, Mike is following God’s lead. “I’m nobody special,” says Mike, “yet, God is faithful.” He admits when he needs help and has learned to lean on and delegate responsibilities to others on his team. God continues to affirm his calling: “My trust in God and the work of the Holy Spirit has increased these past few years,” he says.

The next day, nine youth gather around a wooden table in the back room of a church basement in the village of Seon, a 30-minute train ride from Mike’s office. Their attention is on Mike. Wearing Billabong dark-wash jeans and a RipCurl button-down plaid shirt, Mike blends in among the highly energetic bunch. Using the Schülertreff brochure, he explains three disciplines: prayer, reading the Bible and living the Christian life.

Making eye contact when speaking, Mike passes around pieces of plain paper and instructs the students to write down the names of three to five classmates who don’t know God. Some think for a moment, while others immediately begin jotting names.

Pascal, a 13-year-old student, pens four names. Sometimes he is nervous to talk with his friends about God. “It depends on the person,” he says, “because some of my friends are for the faith, and some are against it. Sometimes I’m afraid of their reactions.”

The group leader, Martin, pipes up: “The passion we have to reach others for Jesus is stronger than the fear of rejection.” Martin writes down five names. Before leaving, they all stand, some with arms draped over one another, and pray aloud for their friends to know Jesus and for courage to talk to them about spiritual matters. Walking out the door, one boy safely tucks his paper inside his flip cell phone.

In Switzerland, there is a strong sense of self-sufficiency—pride in self and country. Many people seem to have it all together, but admit desire for God due to emptiness or lack of purpose. “A lot of teens are very cool on the outside,” explains Tamara Krone, a staff member on the Schülertreff team. “But when you talk with them, you hear a need, an emptiness. They have broken families, divorces, patchwork families with stepparents, brothers and sisters.”

Jonathan Bucher, a staff member with Youthalpha—one of the three youth ministries in Campus für Christus Schweiz—agrees. “Because there is basically no poverty, no outward problems here, people don’t seem to have problems,” he says. “[Yet] when I talk with young people, they don’t have a vision for their life.”

Tamara explains, “Sometimes young people don’t think they can do anything, but when someone from outside their family steps in and tells them they can make a difference, that gives them a sense of purpose.”

Christian students are beginning to find other students, cousins, neighbors, and church friends, motivating them to start ministries at their schools. One 15-year-old girl asked her mother to cook a spaghetti lunch, and invited her friends to come over and eat while she cast vision for starting a youth ministry at her school.

“We really want to trust what the individual Spirit-filled person can do,” says Mike. “That is part of our heartbeat here in Switzerland.” The youth team doesn’t want to overload students with training; they want them to learn initiative. “We are equipping them with very simple tools to share their faith without being religious,” says Mike. “Not just [giving them] steps to complete. We want them to believe in a great God, not a great tool.”

Mike meets with local Bible college students on Tuesdays for outreach in nearby villages. He uses evangelistic materials to explain the message of salvation with people he meets.

A few days later, Mike skateboards down the sidewalk toward a high school in the village of Brugg. A ministry sprang up here last year because 15-year-old Sabrina decided she wanted her peers to know about God. During Thursday lunch hour, Mike visits to bring materials, youth devotionals and evangelism booklets. He also leads them through a small Bible study.

Before returning to class, the teens break up into small groups to walk around the school property and pray. Suddenly, a student who is not part of Schülertreff begins following one of the prayer groups, asking what they are doing.

The group had just been praying for opportunities to talk about God with their peers. Michael, a first-year student, runs to find his backpack and grabs the Gott kennen lernen? (Would You Like to Know God Personally?) evangelistic booklet Mike had given him.

He runs back outside and hands it to the inquiring peer, telling him they can talk about it together if he wants to know more. During their meeting only moments before, Mike had told the teens, “Through you, your friends can come to know God.” It became reality for Michael that afternoon; he was taking a brave step to reach someone who doesn’t know God.

Being a Christian often isn’t popular among students, but Mike encourages them to take risks. One girl wanted to wear a small button that says, “Ask me about God,” but knew she would be mocked. She asked Mike to pray she would be brave and wear it. “These students are brave,” says Mike. “I like that about them. They pay a price to live the Christian life.”

Like Michael, who ran to give his friend a booklet about knowing God, there are many young leaders on the rise. “They aren’t too young,” explains Mike. “We don’t need to wait for the best trained leaders—we start with younger ones and coach them, bringing out leadership qualities they have but may not know about.”

Students are reacting to God’s calling. They say, “God put it on my heart to reach my school friends.” Then they do something about it, like Tasheena, who leads the group in Otelfingen. She wants her peers to be praying and worshipping God. She’s already begun meeting with one of her classmates to read the Bible and pray with her.

Mike says, “I don’t say they are the Christian leaders of tomorrow. They are the leaders of today. We don’t need to wait. They can have an influence now. There are 11-year-olds praying for their schools. They are seeing answered prayer and they are talking about it.”

Hopping on his wooden skateboard with orange wheels that match his orange messenger bag, Mike rolls to the train station for the 35-minute ride to another youth meeting.

Action Point:
>Mike leads Swiss young people who have a passion to see their friends know God and take the initiative in beginning spiritual conversations. In what ways can you be creative in reaching out to your friends or family?

Desiring to learn more for the sake of their children, 2 parents make a surprising discovery for themselves.

Partnerships across the country helped to update this classic course.