“I could not believe what I was hearing…” 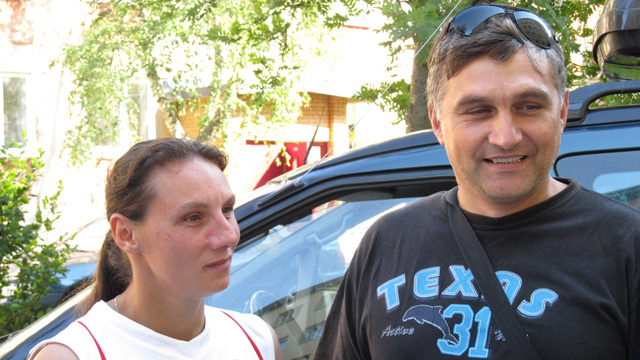 When Costya Pocitarenco of Moldova heard about Heartbeat Tallinn, memories flooded his mind. Costya, coordinator of JESUS film outreach, had been born in Estonia, and had a happy childhood growing up by the seashore.

Then Costya’s father tragically died in a farming accident, and everything changed for the 9-year-old boy and his little sister, Anna. His mother began drinking heavily and abandoned the boy. His grandparents took him to live in Moldova, a part of the Soviet Union at that time, as was Estonia.

Costya grew up a Moldovan. He visited the family in 1991, but when the Soviet Union disintegrated, contact was cut off. He mother died in 2001, but he heard nothing from his sister. By the time of Heartbeat Tallinn, he hadn’t seen her in 22 years, when she was just 11.

Meanwhile, Costya had made a new discovery – God was real, and had sent Jesus so that mankind could know Him. Costya had gone to a theater to see a cowboy movie, but instead they were showing a film about the life of Jesus. “I saw one moment when Jesus calmed the storm,” he said, “and I prayed, ‘God please calm the storm in my heart. It was the first prayer in my life.’

Eventually, Costya began showing the JESUS film himself, so others could know God too. In the past 10 years, he has planted 4 churches using the film. Since 50 percent of Estonians speak Russian, Costya saw Heartbeat Tallinn as a great opportunity to share the message of Christ in his country of birth.

Plus he wanted to revisit his old neighborhood. “Come with me,” he told his children and wife, “and I’ll show you the house I lived in, and the school I attended!” When they arrived, they saw several older ladies sitting on a bench.

“Do you remember Sveta and Kolya Pocitarenco?” he asked.

“We do,” they said, “and we also remember their son Costya.”

“I am Costya!” he exclaimed.

The neighbors embraced him warmly. One still had a picture of Costya entering first grade, and gave him the picture. They talked for a while and then Costya asked about his sister.

Their eyes fell. It was a sad story – Costya’s mother had been deprived of parental rights and little Anna taken away. Later she became a drug addict and alcoholic. They did not know where she was.

The next day Costya took the family for a swim at the beach. His wife, Lily, felt they should park in the same place as before and take public transport to the beach. As they got out of the car, a neighbor shouted, “Costya, we have been waiting for you! Your sister was here an hour ago!”

The neighbor had a number – Costya called immediately and Anna picked up the phone. “Don’t leave!” she said, “I’ll be there in half an hour!” Thirty minutes later the two met in the neighborhood where they had grown up. “I cannot describe what I felt,” said Costya, “and how grateful I was to God for His hand in my search for my sister.”

Anna’s life had been a struggle – she had given birth to four children and three were taken away by the state. Only the youngest, a four year old, lived with her. She’d lived in basements and in the woods, scrambling for food. She had been on drugs for seven years, and had tried to commit suicide three times.

“I could not believe that what I was hearing had actually happened with my own sister!” said Costya. He began sharing the gospel with Anna, telling her of the Father who cared for her and had not let her die before hearing of Him and eternal life. She burst out crying, and said, “I have never heard of this God that you are speaking about!” Costya invited his sister to a Heartbeat Tallinn meeting, and she came with her common-law husband. They listened to what was said, and believed.

Costya thought of the verse from Romans – “Faith comes by hearing, and hearing by the Word of God.” “I saw the reality of this in my sister’s eyes,” he said. “I could not look at them without tears in my eyes, for I saw how God was building up their faith.”

In the weeks and months since Heartbeat Tallinn, Anna has become a different person. Both she and her husband have begun to attend church, and their son goes to Sunday School. Costya gave her a Bible and she soon finished reading the Gospel of John.

Anna and her husband have led a very hard life, and still have a long ways to go. But there is hope. “I remember the words of Christ and find encouragement in them,” says Costya. “Whoever was forgiven much loves much.”

As a staff member with Agape Estonia (as Cru is called there), Daire (pronounced DYE-rah) directs Fox Week in partnership with the university. For 10 years, Agape Estonia has helped to organize the event as a way to make the transition easier for new students.

The HeartBeat Tallinn event in Estonia brought the church together to reach the city.